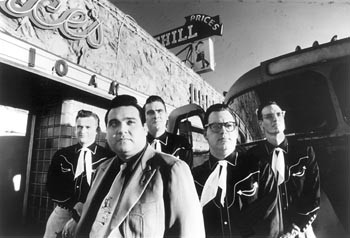 WHEN YOU’VE GOT a scratch, you’ve gotta itch it. Earlier this year, Big Sandy and his band, the Fly-Rite Boys, went their separate ways to record CDs of their own. Big Sandy has done a doo-wop/R&B record, Dedicated to You, while the Fly-Rite Boys cut a mostly instrumental CD that sticks close to their accustomed mix of country swing and rockabilly.

The separate experiences were rewarding, Big Sandy [aka Robert Williams] says, but he hopes people don’t get the wrong idea about the side projects.

“I’m hoping also that people won’t think this [solo CD] is my new direction,” he says. “I’m not leaving what I have been doing. It’s just a side project that ended up pretty good, I think. But it’s not going to lead me away from anything.

“Some of it I might incorporate into what we do as a band.”

The projects actually came about as much for practical reasons as for any artistic objective. Coming off of their third critically acclaimed CD for HighTone Records, the 1996 release, Feelin’ Kinda Lucky, Big Sandy and his Fly-Rite Boys found themselves getting a few feelers from major labels.

This left the band in an awkward situation for recording another group CD, Big Sandy says.

“There was a possibility that somebody from the major labels was interested, but wasn’t really coming through,” says Big Sandy, who notes that the side-project CDs had actually been suggested by HighTone. “We were just kind of hanging there and didn’t want to wait, not doing anything. So this was a good project for us to do in the meantime, to buy us time, I guess, a little bit.”

At first blush, the idea of Big Sandy singing doo-wop might seem like a radical shift from the Fly-Rite Boys’ more country-based sound. In truth, Sandy has deep roots in all these styles. Growing up in the L.A. area, Big Sandy, now 33, discovered his favorite music through his parents’ record collection. His father’s music was stocked with ’50s-era rockabilly and hillbilly music.

His mother, however, favored doo-wop and R&B of a similar vintage. As a high school student in the late ’70s, Big Sandy, having such musical tastes, seemed a bit unusual.

But these interests reflected his general curiosity about the pop culture of the past.

“I don’t know why a person is drawn to one thing and not another,” Big Sandy says. “For me it was not just with the music, it was with everything–the clothes, the cars. As a kid I would stay up at night past my bedtime, sneak out to the living room, and watch the old movies. It seemed to carry me away to another time, and I don’t know why I liked that feeling. I don’t know if I was unhappy living in the present; I just don’t know.

“But even simple things you watched as a kid, like on TV Our Gang/Little Rascals, which is so fascinating–I didn’t even know exactly when they were from, I just knew it wasn’t from now. It was coming from somewhere else, and it felt like I was transported to another place. That’s what I was feeling in the music,” Big Sandy says.

“I started going out with my father, hitting thrift stores and junk shops and picking up 45s and 78s. For me these were the new records as they were coming out. I just kind of immersed myself in that. I don’t know, I feel funny sometimes. I might have lost a lot on the way, what was happening currently along the way.

“But I think I gained something from it as well.”

EVENTUALLY, the early ’80s rockabilly revival spearheaded by such bands as the Blasters and Stray Cats gave Big Sandy a scene to join–and soon afterward the inspiration to try music for himself. Wearing ’50s-era outfits and sporting a sound that was more traditionally rooted than new wavish rockabilly groups like the Stray Cats, Big Sandy and his Fly-Rite Boys made quick progress.

“It’s funny, but when I was in high school in ’81–I graduated in ’82–I started noticing there were shows going on,” Big Sandy says. “I’d find these flyers, ‘rockabilly this or that.’ And pretty soon there were quite a few rockabilly bands around town. They were playing like kind of a more updated version of it, but it was similar to the stuff I’d been listening to.

“I right away fell into that scene.”