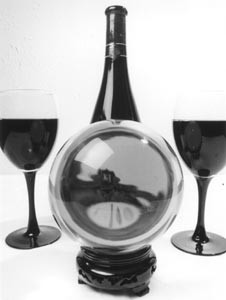 A NEW YEAR has dawned, and with it much speculation, consternation, and anticipation over what lies ahead. Little wonder: In the year just concluded, the most “challenging” grape-growing season of the decade resulted in much lower yields than the record-breaking crush of 1997; one of Sonoma County’s top wineries–Geyser Peak–was gobbled up by a giant spirits conglomerate; and new housing tracts contributed to the clogging of the county’s primary transportation artery, Highway 101, further stripping the region of its historic agricultural atmosphere.

What can Sonoma County wine lovers expect from the world of vino in 1999? A glimpse into the trusty Wine Lines crystal ball reveals the following likely developments:

Commemorative wines. Since a new millennium comes around only once every thousand years, expect numerous wineries to release special millennial bottlings during the year ahead. These releases will feature artsy labels and appropriate verbiage, and because of their caché with collectors, undoubtedly will cost a few bucks more than “regular” bottlings.

An example would be the 1990 Cuvée Dom Perignon, scheduled for a March release. This special bottling of arguably the world’s most acclaimed sparkling wine will include a keepsake cork designed by Cristofle, the renowned French silversmiths. The cork is hinged to open side to side, includes the inscription “31 Decembre 1999,” and is suitable for additional engraving.

The suggested retail price for this commemorative bottling is $200. The keepsake cork is available separately by mail for $65. Also look for Sonoma County’s sparkling-wine producers to unveil millennial packages, and don’t be surprised if a number of high-end winemakers come up with commemorative releases of cabernet sauvignon, chardonnay, and other varietals.

Steady, and perhaps even lower, prices on many red wines. Because of the record-setting California crush of ’97, numerous white wines released in 1998–particularly chardonnays–saw their prices remain unchanged from the year before, with some even going down. As an example, in recent weeks the 1997 vintage of one of California’s more popular chardonnays, the Meridian bottling from Santa Barbara County, has been seen in supermarkets for as low as $6 (the wine normally sells for around $10).

In 1999, the market will be flooded with red wines from the 1997 vintage, and for one of the few times in recent history, the law of supply and demand may actually work in favor of the consumer. Wines that in the past have sold for $20 or less are the most likely to see stable prices or possibly even decreases, especially if the glut remains after July.

Growing demand for syrah. Just as the popularity of merlot exploded a few years ago, expect sales of syrah (aka shiraz among local Aussie vintners) to skyrocket in 1999. There are two reasons for this: Syrah is a tasty alternative to more traditional red varietals, and record tonnage of California syrah grapes was harvested in 1997. A vast majority of the resulting wines will gain wide distribution in the months ahead.

Meanwhile, local corporate giant Kendall-Jackson has released three syrahs from previous vintages, each with unique aroma and flavor characteristics, and all including grapes grown in Sonoma County:

Kendall-Jackson 1996 Vintner’s Reserve possesses a touch of terroir in the nose, leading to bright, sweet red fruit flavors. Featuring grapes from two vineyards in Sonoma County and one in San Luis Obispo, this is a serviceable syrah. $16. 2.5 corks.

Kendall-Jackson 1995 Grand Reserve Grapes from Sonoma County’s Durell Vineyard make up 95 percent of this jammy, mouth-filling wine, which has an aroma and flavor of mild blackberries, complemented by a hint of pepper. Though just $4 more than the Vintner’s Reserve, it’s light years ahead on the enjoyment scale. $20. 3.5 corks.

Kendall-Jackson 1995 Durell Vineyard is an excellent example of what talented winemakers can accomplish with exceptional grapes. The Durell Vineyard is situated on an eastern hillside in the Carneros growing region near San Pablo Bay. Unlike many vineyards in this area, where cooler climes dictate the planting of chardonnay, pinot noir, and merlot, the Durell Vineyard receives full sun exposure, making it ideal for syrah grapes. This wine oozes aromas and flavors of blackberries, plums, blueberries, and pepper, finishing with tongue-tingling spices and a hint of chocolate. Better still, it’s an outstanding value. $16. 4 corks.

From the January 7-13, 1999 issue of the Sonoma County Independent.