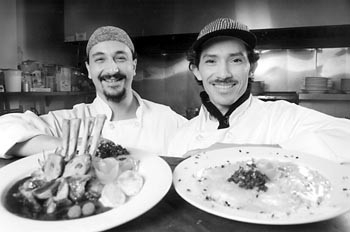 IT’S EARLY on a weekday afternoon and Cucina Paradiso is slowing down. Small clusters of people bask in the setting winter sun, sipping coffee and toying with their desserts. The show, for the moment, seems to be over. But in reality, the action has simply moved next door, to an empty storefront. There, chef/owner Dennis di Branca and co-chef Mario di Paola wander the dusty space. Ghosts of counters and tables and shelving spring up around their slow, considered movements.

The two men’s intentions are as clear as the blank glass: expansion.

Di Branca purchased Cucina Paradiso just last August with his wife, Malena Hipolito, and bought out a previous partner’s shares in November, but they already are hoping to add space to their compact kitchen and dining area sometime in the first half of the year. “The owner says, yes, but ah, it takes time, six months … “Di Branca’s voice trails off, not from uncertainty but because his English is still too halting to express the drive that brought him and di Paola over the course of years from their homes in Sicily to a plain-faced riverfront building in a nondescript shopping mall near downtown Petaluma. Here their fresh, light-handed interpretations of Old World Italian cuisine have been garnering enthusiastic reviews from the local press and restaurant-going public.

Di Paola, who held down an executive-chef position at a restaurant in San Bruno until this month, is glad to get praise for his hard work. Of course, he’s used to the work, having been in the kitchen for two decades. Not too bad for a 34-year-old. “In Sicily, it is totally different from America or North Europe,” he says in broken English and a mellifluous accent. “We are not so poor people, but we need to go to work at young age.” In 1979, at age 15, di Paola entered a three-year cooking institute in Palermo; in the summertime he and his fellow students were sent out to work in hotels and village restaurants around the region.

Di Branca, on the other hand, started out in an engineering program in Italy. His efforts in science ended early–“Sometimes you just know when something is not right,” he says simply when asked why he changed his mind. Di Branca started all over as a busboy and worked his way up through restaurants in both Italy and the United States.

ITALY IS KNOWN as a country where everybody, even busboys, seems to know and live good food. Liking food, and learning to work with it, is as easy as breathing. The food both men remember as their first dishes, omelets, are intimidating to grown people here, but the ingredients and preparation are simplicity itself, literally kids’ stuff–in Italy.

“Lots of kids [in Italy] know how to make things to eat,” says di Paola. “Here, in America, kids go out, they go to McDonald’s.”

There are McDonald’s in Italy, he says, but the fast-food chain is only just starting to catch on. Twenty years ago nobody went to McDonald’s. “Sinsa lira,” interjects di Branca in a shy mumble. The meaning is apparent even before Mario translates for the Italian-impaired: no money.

“But now people in Italy, they buy a lot of McDonald’s,” adds di Paola. “It’s something different.”

Di Branca nods in agreement. “They like to try. It’s something new, you go to try it.”

The men’s open-mindedness about the meaning of new food in an increasingly global culinary culture is an interesting contrast–or complement–to their own dedication to Old World traditions. Most of their basic groceries–cheeses, dried pasta, oils–are imported from Italy. Fresh pasta is made daily by hand. And between the two of them, di Branca and di Paola have worked in very traditional kitchens with some masters of Italian cuisine, learning the old ways. Among his words of admiration for his mentors, di Paola says, “They are very strong because they learn in a different age. Maybe [because] in that time they don’t have mixers.”

FEW PEOPLE in the modern-day United States understand, as di Paola does, that a kitchen without electric gadgets means laborious work. Pesto is made with a pestle (the two words come from the same root, meaning to crush). Bread dough, elastic and lively, must be wrestled into loaves every day. Produce is chopped/ minced/grated by hand, and the loudest noise is when somebody drops a lid. Technological advances have made things different. “Before in the kitchen there were 20 people,” di Paola explains. “Now you can do with six or seven people the same food.”

Using fewer people means using less space, a particularly relevant point for the staff of Cucina Paradiso. Walled off in one corner, di Branca and di Paola need to get by with two or three people. In spite of their space constraints, the two are happily reproducing the flavor and feel of their home region’s cooking, using only a few “newfangled” machines–a pasta machine, a food processor. They want to incorporate even more of the handcrafted tradition, when they have more room.

And as di Branca and di Paola eye the storefront next door, new possibilities seem, well, right around the corner.