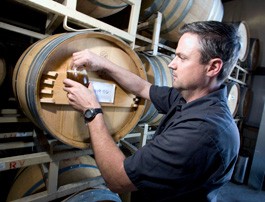 Feared by winemakers, is the 'Brettanomyces' yeast good for brewers?

The notorious and unruly wine yeast that creates flavors of mushroom, forest floor and earth flavors at its best and goat, horse sweat and barnyard at its funkiest has, in the past decade, gained an unlikely place deep in the hearts of beermakers. Brettanomyces, though feared by most winemakers as a spoilage agent, is now a key component of the brewing operation at Russian River Brewing Company. Many other breweries, including Ballast Point in San Diego County, New Belgium in Colorado and Jolly Pumpkin in Michigan, have put out beers potently affected by Brettanomyces.

But other brewers remain reluctant. They cite the facility with which the yeast can spread through a space and the difficulty in banishing it from the premises as the best reasons not to utilize it. “Brett,” as it’s informally called, will bore into wood and can dwell in wine barrels even when they’re dry and empty, feeding on the cellulose itself for months or even years. When beer or wine is added to such infected barrels, the Brettanomyces surges into activity, fermenting the sugars and creating alcohol.

Ethyl-chain byproducts, meanwhile, create both the revered and the reviled funkiness. Many brewers who work with Brett also utilize Pediococcus, Lactobacillus and Acetobacter, microbes that can produce eyeball-twisting sourness.

At Stone Brewing Company in San Diego, founder Greg Koch loves sour beers so much that he has hosted the “Sour Fest” three summers in a row, but he hasn’t yet dared to utilize Brettanomyces or other bacteria in his facility.

“The complexity and flavor characteristics that you can achieve with Brettanomyces open up a whole new world,” praises Koch, who discovered Brett beers on a tasting tour in Belgium 15 years ago. “The thing is, you could equate having Brett in the brewery to playing with fire in a gasoline factory.”

Brettanomyces is capable of airborne dispersal, and once it touches a piece of equipment, that item may be considered ruined. Local wineries like Simi, Robert Mondavi and Heitz Cellar have all battled with Brett invasions. Treatment with sulfur dioxide may kill Brett colonies, but more commonly, the tainted equipment is simply thrown away—or passed on to other brewers. Russian River picks up used barrels from local wineries each spring for aging its sour beers. Some barrels may be already infected with microbes. Others are manually inoculated.

Sour beers originated in Belgium, where brewers once left their fermenting pots of beer exposed to the outdoor air, a technique called “spontaneous fermentation.” Airborne wild yeasts and bacteria would settle into the beer, thrive, multiply, create alcohol and leave their musky mark on the scent and taste of the stuff. None of this microbiology was understood, however, until 1904 when N. Hjelte Claussen, then director of New Carlsberg Brewery, first isolated and named Brettanomyces in a lab in Denmark.

Sonoma County’s tight interface between Brett-loving brewers and winemakers fearful of the yeast has set the stage for tense encounters.

Sheana Davis, owner of the Epicurean Connection in Sonoma, remembers being out with Russian River Brewing Company owners Vinnie and Natalie Cilurzo at a wine function. She says, “When Vinnie would say that he played around with Brett, the winemakers would take a step back, physically.”

The fear was that the yeast could be transferred like an airborne virus.

“[Vinnie Cilurzo] said he had Brettanomyces in the barrels, and it really freaked me out,” says Coturri, who makes organic wines in Glen Ellen with several native wild yeasts—but not Brettanomyces. “That was the first time I heard that brewers ever used it, and I couldn’t believe it. For winemakers, Brett is a problem. If you’ve got it in your winery, it’s serious. It’s one of the worst things that can happen to a winery.”

“They were really nervous about where the cork might land and about swirling the glasses and sloshing out the beer,” he recalls.

But for all the effort of local winemakers to dodge the doings of Brett, throughout the Rhône, Burgundy and Bordeaux regions of France, Brettanomyces occurs in local wines—proudly so—and has long been a component of their earthy, low-fruit flavors. A small number of California winemakers may allow a limited quantity of Brett to accumulate in their wines, imparting subtle savory flavors to balance excessive fruitiness. Wine critic Robert Parker of Wine Spectator is said to give high ratings to such wines.

Davis of the Epicurean Connection also admires the effects of Brettanomyces in wine. “If it creates that clove and leather flavor,” she smiles, “then I’m a fan.”

But the chemical flavors of an advanced Brettanomyces infection turn others off. Mark Todd, a Sonoma County cheese promoter, beer fan and wine enthusiast, says that he has opened wines so strongly tainted by Brettanomyces that they smelled of nail polish.

“That is not a good thing,” he says. “It’s really like what the chemists say it is: spoilage.”

Adam Richardson also calls Brett a “spoiling agent.” As director of winemaking at Underdog Wine Merchants, Richardson contends that Brettanomyces only diminishes the elements of terroir in a wine, destroying the fruit, soil and other characteristics unique to a given vineyard. “Brettanomyces doesn’t represent the soil,” he says. “Brett comes from the cellar, especially the barrels. My personal style is to let the vineyard and the fruit show without the essence of Brettanomyces.”

In a 2004 article, Richard Gawel, a research scientist with the Australian Wine Research Institute, wrote, “Brettyness mitigates against ‘typicity’ and diversity. . . . Real ‘typicity’ and ‘expression’ indeed come from the fruit.”

Gawel posits that wines overly affected by Brettanomyces represent a homogenous category, as the yeast can completely flatten any regional flavors unique to a wine.

But some brewers believe Brett can have exactly the opposite effect on beer. They say that spontaneous fermentation creates regionally distinct beers that reflect the population profiles of locally occurring wild yeasts and bacteria. One brewery in Belgium—Cantillon, founded in 1900—so cherishes the effects of the local airborne microbial colonies that management has declined to build a second location, believing that the beers could never be duplicated elsewhere than the original site.

Amid the vats and pipes and kettles of Lagunitas Brewing Company’s warehouse, Marshall keeps a handful of old and carefully managed bourbon barrels inoculated with multiple species of Brettanomyces, and he has several stouts currently aging and acquiring funkiness. Marshall calls these beers “experimental” and for now only serves them on draft at the brewery’s new pub.

Marshall expects that as the Brett trend accelerates, sour and funky beers could become an increasingly homogenous genre of tart brews that all taste more or less similar.

“As more players release a Brett and/or sour beer, there is a possibility that the sourness will begin tasting the same across the style,” he says.

Sour beers definitely aren’t for everyone. Tony Coturri, who calls them sour “bombs,” says, “A few sips are interesting, but it’s not something you’d want to have a whole glass of.” Mark Todd says he has “grown to enjoy” sour beers as “a novelty” but admits that it took effort. And Marshall notes that sampling 10 in a row “can make your teeth feel funny.”

Of an annual production of 10,000 barrels, Russian River brews 1,000 barrels of beer with at least a touch of Brett. Some of this fraction is made with additions of Pediococcus and Lactobacillus, while one beer, Sanctification, is a rare 100 percent Brett beer, fermented in the absence of even Saccharomyces, the common ale yeast. Owner Cilurzo loves funky and sour beers and says they generate a major portion of his brewery’s sales.

But Lagunitas does well without them, and to Marshall, beer’s main assets are hops and malt.

“As a general rule,” Marshall says, “at the end of the day when I reach for a beer, nine times out of 10 I don’t want a sour beer.”