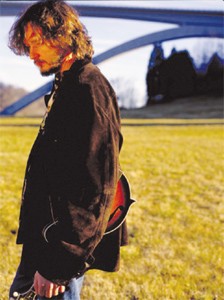 Flying Solo: Leftover Salmon’s Drew Emmit gets across that bridge.

Keepin’ it light and breezy

Memo to the dark-haired twenty-something chick I saw walking down Washington Street in Petaluma last week under the blazing noonday sun: Black wool turtlenecks are not to be worn between Memorial Day and Labor Day, or any other day when the thermometer is surging into the triple digits.

Light and breezy is the way to go during the proverbial dog days of summer. So get with the program. August is all about sandals and tank tops and bathing suits and summer music festivals. Abandon that hot, scratchy boho garb, and buy some scalped tickets to the Strawberry Music Festival, where you can spend Labor Day snoozing under a shady willow beside the placid lake while the gentle strains of Tim O’Brien’s mandolin waft up from the stage area. Wallow in the bluegrass, savor the sweet smell of fresh-cut alfalfa and the marvel at the sensuous feel of real grass as it slips coolly through your toes.

Meanwhile, here are three new acoustic CDs to get you in the mood.

Tone Poets (Acoustic Disc) is a two-CD set from Petaluma mandolin virtuoso and label chief David Grisman–one of the driving forces behind the burgeoning acoustic music scene that has blossomed since the 1970s–that features 42 musicians playing in solo and duo settings. The sessions, recorded over four years on a two-track analogue tape machine that captures the music in all its naked glory, are a who’s who of flatpickers, fingerpickers, slide players, mandolinists and dobroists. Grisman, Frank Wakefield, Mike Marshall, Beppe Gambetta, Martin Taylor, Bob Brozman, Sam Bush, Jody Strecher, John Jorgenson, Tim O’Brien, Tony Rice, Chris Thile, Ronnie McCoury and Jerry Douglas are just a few of the phenoms who contributed to this project.

His freewheeling spins on Dylan’s “Meet Me in the Morning” and Little Feat’s “All That You Dream” alone are worth the price of admission. One of my favorite albums this summer.

Meanwhile, acoustic guitar virtuoso Leo Kottke–best known for his solo work, though 1991’s Great Big Boy included a guest appearance by Lyle Lovett–has reunited with Phish bassist Mike Gordon on the breezy Sixty Six Steps (RCA Victor), the follow-up to their Clone recording. The CD, due Aug. 23, is a mix of originals and covers. If you’re surprised to hear that Kottke has recorded a second collaborative album, wait till you hear him lay those trademark jagged rhythms on Fleetwood Mac’s bluesy “Oh Well” or his cover of Aerosmith’s “Sweet Emotion” played on a Turkish baglama.

Heady stuff, but you’ll feel no compulsion to bury your noggin’ inside a scratchy woolen sweater.