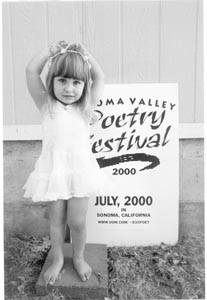 Word play : Kyrie Dawson is helping with promotion for this annual event.

THE MONTH of July is generally reserved for fireworks, fond remembrances of the Revolution, and domestic beer. But in Sonoma Valley, the fireworks come in the form of words, the revolution is part of the rediscovery of poetry sweeping the nation, and the beer is most likely ale from Murphy’s Irish Pub.

Now in its fifth year, the Sonoma Valley Poetry Festival presents a slate of 15 poetry events during July at a dozen venues throughout the valley. The festival features the verse of local and nationally acclaimed poets. The diverse offerings include work by poets young and old and even dead.

“When Bill Moyers came, he said, ‘Poetry is the heart of democracy,’ ” recalls local writer and educator Arthur Dawson, speaking of the venerated journalist and author whose appearance at the first poetry festival continues to galvanize the community.

Dawson, a member of California Poets in the Schools, admits that poetry was once relegated to the ass-end of the body politic, or shoved off into the fringe world of greeting cards. But as early as the mid-’80s, Dawson began to recognize a shift in the form’s popularity, which was buoyed by the advent of the Apple Macintosh and the subsequent maelstrom of desktop and small-press publishing that brought the work of many poets to the public eye.

“I think poetry gives people a chance to express who they are and what they’re thinking, but it’s also the last stronghold of noncommercial messages. Nobody writes poetry to make money. There are those of us who write poetry–and teach–who may make part of a living from that, but there are very few poets who can make a living just by writing poetry. The payoff is more of a spiritual and psychological payoff,” says Dawson, whose publication credits include his poem “Why I Might Have a Problem with Human Cloning,” published in Mothering Magazine.

“There’s no Nike poet, and God forbid if there ever was,” he adds. “I think poetry is riding a really strong wave right now, and it seems like it’s still building, but it’s hard to imagine it becoming trendy.”

Though it may not be trendy, the Sonoma Valley Poetry Festival, which operates under the aegis of the Sonoma Valley Educational Fund, has been known to turn a buck. All profits go to the California Poets in the Schools program, which brings working Golden State poets to students. This year, all contributions received by the festival will be matched by the Morris Foundation, an adjunct organization of the festival.

“We’ve been involved with the Poetry Festival off and on for about five years. We think it’s a wonderful experience to have poetry in the community. It brings everything to life,” says Readers’ Books proprietor Andy Weinberger, who with his spouse, Lilla, is putting together a slate of nationally recognized poets on Saturday, July 22, that will include Oakland’s Forrest Hamer, author of Call & Response: Poems, who is a recent recipient of the Beatrice Hawley Award.

At the General’s Daughter restaurant, poetry has been added to the dessert menu on Sunday, July 9, so diners may order up a live poetry reading as the “Nonfat Special,” “The Gourmand’s Delight,” or “The Works.”

Murphy’s Irish Pub, the popular watering hole that held the recent Bloomsday celebration in honor of James Joyce’s Ulysses, shifts to the works of another Irish son on Tuesday, July 11, when actors will recite from the work of William Butler Yeats.

A “Dead Poets” event on Wednesday, July 12, at Gundlach Bundschu Winery offers the fans a chance to read poems by their favorite deceased versifiers.

Other events include a double bill of “Soap Box Poetry and Multimedia” on Saturday, July 22, when poets are invited to rant and rave ˆ la the political barkers of London’s Hyde Park, presumably in the medium of their choosing.

ANOTHER PROGRAM that may pique the interest of local troubadours is the “Song Line Sonoma,” which encourages poets to cavort and bestow bon mots at selected pit stops throughout the city of Sonoma.

“Some aboriginal cultures don’t have a written language so what they do is sing songs and recite poems about all the places they’ve beenÑnot only in their lives but [in the lives of] generations preceding them as well. ‘Song Line Sonoma’ is our small version of that,” says Russ Bedford, one of this year’s festival organizers, who adds, “Poetry is entertainment.”

“Almost any poem, no matter how trivial or light it may be, whether it’s a limerick or an ode, is really a sincere expression on the part of the poet,” he says. “My own definition is that poetry is probably the most honest kind of expression there is because you know it’s the poet’s view and his mood and attitude toward a given subject at that moment. As a poet, you sweat.

Bedford sees the poetry festival as part of a movement of poetry-related events springing up in small towns across the country–a phenomenon he hopes continues.

“I think that poetry is becoming more accessible. Sonoma County is so active, with so many poets, from professionals to amateurs,” says Bedford. “You look around and you see that there are a lot of other towns that have active poetry readings and events.”

Dawson, who will helm readings of his students’ work as part of the Trinity Poetry Series at Trinity Episcopal Church, attributes much of success of such events to the fact that many of those in poetry audiences are often poets themselves.

“It may surprise you, but there are more poets than you would ever expect. I meet many people and later find out that they write,” he avers. “That’s one thing that the poetry festival doesÑit allows people to sort of come out of the closet and try out reading some of their poems and sharing what may be a hidden passion.”