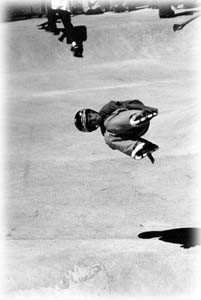 POWERED BY SMALL WHEELS and fast feet, skateboarders and in-line skaters were on a roll in Petaluma over the weekend. It’s been a long wait–some would-be roller-bladers have probably long since outgrown their boots, since this project started 10 years ago–but a new skate park has just opened in Petaluma.

The skate park, which boasts a challenging course of cement slopes, ridges, and bowls, attracted a large weekend crowd of several hundred enthusiasts intent on sliding, gliding, and attempting such elaborate stunts as leaping and flipping their boards.

The 14,000-square-foot facility, located behind the Petaluma Swim Center on East Washington Street, cost $102,998. It was designed by Santa Cruz architect Ken Warmhoudt with input from local skateboarders and in-line skaters.

It’s the second legal skate park in the county; there’s already one in Santa Rosa and another set for Healdsburg.

There’s no supervision at the Petaluma facility, just a list of rules requiring users to wear protective body gear and helmets–some comply, most don’t.

Skating enthusiasts will use the park at their own risk, and the city won’t be responsible for injuries.

Jim Carr, Petaluma’s director of parks and recreation, says the park has already suffered some minor crime: graffiti scrawled on the sign have altered the rules to ban in-line skaters (they’re allowed) and to permit bicycles (they’re banned).

In addition, several people brought marijuana and alcohol into the park the first night.

“The police will be coming by periodically,” warns Carr. “The kids have fought too long and too hard to let their park be jeopardized by a fringe element.”