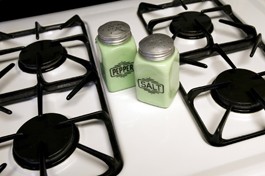 With big cooking fast approaching, a short primer in how appliances drive the way we cookBy

You don’t realize how indispensable a kitchen sink is until it stops working. Our faucet was running fine, but some mysterious, vile obstruction lodged itself deeply in the drain. After an enthusiastic plunging failed to stir its bowels, a pool of water remained in the sink, gurgling lazily but defiantly.

The timing was not good. I was in the middle of testing angel food cake recipes for an article with a pressing deadline, and setting the task aside for another more free-flowing day was not possible.

Angel food cake, even when baked by an impeccable neatnik, is a dish-intensive preparation, one that leaves precariously stacked towers of sugar-sticky stainless steel utensils—bowls, sifters, whisks, measuring cups—in its wake. These I washed with incredible ineffectiveness in our backyard, using a garden hose.

Thankfully, our trusty electric stand mixer functioned just fine, beating several batches of egg whites to soft peaks with ease. Angel food cake did not appear on the horizon of American baking until the latter half of the 19th century, around the same time the first patents for rotary eggbeaters were granted. Anyone who has ever whipped a dozen egg whites by hand understands that this is no coincidence. One of the sources I ran across during my angel food research suggested that, in those dark days before eggbeaters, the task of whipping the whites was assigned to slaves. Before wire whisks were commonplace, they attacked the egg whites with primitive bundles of sticks or brushes for an hour or so.

While our nation can’t manage the time to cook from scratch now at home, the irony is that a few centuries ago, homemakers had time for nothing but. If a fair chunk of your life was not devoted to the laborious raising, gathering, processing and preparation of food, you didn’t eat, or you ate very crudely. New technologies have both brought us closer to, and distanced us further from, the food we cook.

Hosing down dirty dishes in the backyard, I felt more like a buffoon than a 21st-century Laura Ingalls Wilder. But there was comfort in sensing the temporary nature of the setback, and in knowing that with the turn of a knob our oven would be 350 degrees Fahrenheit, and that in our refrigerator there was romaine lettuce imported from Mexico and leftover pizza and several different types of gourmet mustard for us to eat at our leisure, and that if worse came to worse, we could always use the carton of lowfat milk and make a box of off-brand macaroni and cheese with minimal effort.

Ah, the refrigerator. Messily tiled with novelty magnets and notes to family members and clipped coupons, it is as much a fixture of display as it is a major appliance, and its indispensable role in our day-to-day eating habits is a thing to which we give nary a second thought, until the power goes out and the Fudgesicles liquefy.

“To many people, electric refrigeration is still such a novelty that they scarcely realize the range of its possibilities,” assures Electric Refrigerator Recipes and Menus, a cookbook published by General Electric in 1927, the same year the company released the million-selling Monitor Top fridge; the book is dedicated to “the modern American Homemaker.”

That anyone would need assistance using a refrigerator is preposterous to us now—you, like, put stuff in it and it, like, keeps that stuff cold—but to a cook who depended on huge blocks of ice slowly melting in sawdust to keep her food from spoiling, the concept of refrigeration at a stable temperature was a revelation in itself. Half of the dishes in Electric Refrigerator Recipes and Menus are chilled aspics and frozen desserts, reminding those lucky refrigerator owners that cold gelatin and frosty ice cream were no longer inconvenient luxuries.

For every new kitchen technology, there is a cookbook. Musician Fred Waring brought the Waring Blendor (spelled thus perhaps to evoke “splendor”) to the masses in 1938, and though he knew it would make great milkshakes and daiquiris, he wanted to expand its potential. He hired home-economics consultant Mabel Stegner, who with her staff developed 1952’s Electric Blender Recipes, which offers “519 ways to make your electric blender the most versatile piece of equipment in your kitchen.” Of those 519, only five are for smoothies (or, as Electric Blender Recipes terms them, “smoothees”). However, if you choose to make scrapple, tongue mousse, Swedish meat ring or “convalescent’s main courses,” the cookbook will serve you well.

It is highly doubtful that the common household electric blender—Waring’s is still an icon—plays anything more than a rare cameo role in savory main-dish preparation. Yes, it can make pesto, hollandaise or hummus, but most of us usually only trot our blenders out for smoothies and margaritas.

The shelves of used bookstores groan under the weight of microwave cookbooks, such as The Microwave Guide & Cookbook (once again, a General Electric publication, with its first edition appearing in 1977). There is something both quaint and naïve in its late 1970s food styling and its optimistically broad range of recipes, such as ambitious preparations for ripe olive risotto or pecan sponge roll. Back then, microwaves were full of timesaving potential, but we have since wised up; probably the most intensive cooking we do in microwaves now, outside of popping popcorn and thawing frozen dinners, is melting butter. The Microwave Guide & Cookbook, for all its valiant effort, ultimately did not convince us that microwaves are anything more than big boxes for reheating leftovers.

When I’m not washing dishes in the backyard, I work at an upscale cookware store. We sell our share of Le Creuset enameled cast-iron coquottes and clad stainless steel sauté pans, whose features change subtly but whose concept and practicality are fairly timeless.

But we also sell electronics such as rice cookers, crêpe griddles, chocolate fountains and bread machines. You can make rice, crêpes, melted chocolate and bread without the aid of specialty electronic devices, but we still live in an age where the imagined ease of automatic preparation will convert our dreary nights of Netflix-watching into a wonderland of fluffy pilafs and butter-kissed crêpes Suzette. And while some bread machine owners may love waking up to the aroma of freshly baked loaves wafting through their hallways, this sort of flaccid, trend-driven technology tends to lose its sheen after a few years, achieving little in the long run except cluttering our cupboards and populating our future garage sales.

I have a Cuisinart food processor, which makes quick work of slicing vegetables or grating cheese. It’s also a pain to clean, with its dangerously sharp and menacingly shaped blade, and its five-too-many plastic attachments. When all’s said and done, I can use my knife just as quickly to slice the potatoes for mygratin—unless, of course, I use my stainless steel mandoline, which is stored inaccessibly behind a pile of cake pans in the most infuriating cupboard in our house. Though I enjoy owning them, neither the presence of the Cuisinart nor the mandoline has revitalized my own home culinary scene.

I wonder if such skepticism greeted the first refrigerators early in the last century, if cynics clung to their unwieldy blocks of sawdust ice, griping dismissively, until the ice man threw in his tongs, driven out of business by GE’s chilly army of Monitor Tops. Such a scenario is, to me, unimaginable, as is the inevitable advent of the next kitchen technology to come along, promising to change our lives forever. Perhaps it will be energy-driven, the downsizing of boxy refrigerators and inefficient conventional ovens to conserve our ill-gained, shrinking reserves of coal and oil. Doubtlessly, a cookbook will come in tow. George Forman grills, induction cooktops, Margaritaville blenders, Sub-Zero freezers—ultimately they’re all versions of the same thing: fire and ice. Make food hot, then keep it cool.

The plumber eventually came and unclogged our kitchen drain. By then, the angel food cakes were baked and half-eaten, the golden crumb of their exteriors growing gummy under their Saran Wrap tents, just the way I like them. I took a frosty bottle of beer from the refrigerator, dipped a corn chip into a plastic tub of salsa and contemplated the mountain-fresh idyll of hauling our water in wooden buckets from a burbling brook, as clear and cool as glass.

I washed some dishes in the sink, then emptied out the strainer, wishing all the while that we had a garbage disposal.