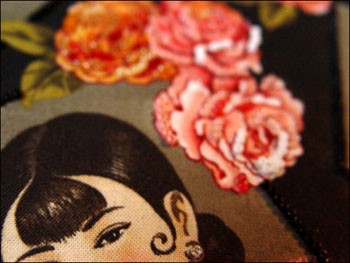 In the Bag: Detail from the ‘Joy Luck Club’ purse made by JiJi Lu.

Our highly selective guide to buying the good stuff at home

Rain sheets down darkly, slivering with uncanny accuracy into even the snuggest of turtlenecks. The burgeoning calla lilies are broken and folded from freeze. Ordinary conifers bear three-digit price tags and those who made the fiscally disastrous decision to bear children suddenly sport calculators and tight-lipped grimaces. Indeed, it’s beginning to look a lot like Christmas. Or Hanukkah. Or Kwanzaa or Solstice, or however the coming of the light is celebrated at your house.

While we are the first to suggest that lovely photo frames fashioned from garden twigs and twine or sheets of overbaked cookies make thoughtful holiday gifts, there is that soul or two on everyone’s list who has somehow come to expect a real gift this time of year. Furthermore, such slavishly spoiled someones prefer a unique present not readily found in mass distribution. To aid in your Grail-like quest, we herewith offer this strange assortment of goodness made right here in the North Bay.

Everyone loves a nudist, particularly when said stripee does so for charity and offers a full 365 days of exposure. This season brings two groups of naked folks from Marin available for purchase, all doffing their duds 12 different ways for a good reason. The 2005 Pink Ribbon Men of Marin, including beloved KFOG 104.5-FM morning DJ Dave Morey, strike strategically considered poses to honor the women in their lives who have been affected by breast cancer. Photographer Acey Harper donates a professional eye, and the resulting calendar is handsome, informative and poignant. Some of the Pink Ribbon men appear at a calendar signing on Wednesday, Dec. 15, at Book Passage in Corte Madera (51 Tamal Vista Blvd. 7pm. Free). Calendars are $19.99 and are also available online at www.pinkribbonmen.com.

Meanwhile, the 12 women over 40 who bravely grace the Cowgirls of Novato calendar also do so for breast-cancer awareness, as well as the Novato Unified School District and the Marin Abused Women’s Services program. Horsewomen all, this dozen are anything but dirty. The calendar, rather, features a collection of attractive, intelligent women interacting with their horses or performing chores in their stables–merely somewhat less dressed than they might usually be. Photographed by Kim Vogee (the current Mrs. December), the Cowgirls of Napa calendar is $20, comes with an art nouveau gold hoof pick (while supplies last!) and is available throughout downtown Novato as well as at Marin General Hospital and the California Grill Restaurant.

This cal notes astronomical seasons, solstices, meteorological aspects and the slippery relationship between day and night. It’s a gorgeously illustrated attitude toward the world that comes in quarterly 12-by-36-inch panels, and is highly recommended for prompting daydreams and curiosity in children. Beginning for 2005 with the solstice happening on Tuesday, Dec. 21 (2004), the time is now to get into the real rhythm of the year. The ECOlogical Calendar is $14.99 and available at www.ecocalendar.info. . . .

Founded by former Section M publishers and editors Michael Houghton and Kevin Jamieson, Designed by Monkeys purveys T-shirts with decided attitude. Originally conceived as a fundraising project for MoveOn.org in advance of the recent Nov. 2 disaster, Designed by Monkeys continues to donate a portion of each sale to MoveOn as that organization decides which good fight to tackle next.

But the right livelihood part is only some of the fun: the real benefit to the ordinary consumer is getting to wear a Che Moore T-shirt, which reenvisions filmmaker Michael Moore as Che Guevara, albeit slightly tubbier; donning an image of Dubya depicted as a puppet with the elegant word “Lies” protruding from his mouth; or simply flipping the design birdie to war–all of which are featured on Designed by Monkey’s website, www.designedbymonkeys.com. T-shirts and belly tanks are $14.99 and each purchase makes an automatic donation to move us on. . . .

Cigar boxes are among the most mutable of hard-to-find everyday objects. Painter Richard Diebenkorn, for example, did some of his most beautiful small works on the wooden panels that compose ordinary cigar boxes. And now the Santa Rosa family of Catherine Alexander, sister Terry Ulitalo and daughter Evin Alexander have formed themselves into the team of JiJi Lou to design a delicious line of purses from the things.

Using drawer handles as purse handles, these one-of-a-kind sacs are decidedly more art than the typical rough-and-tumble wasteland that usually comprises the interiors of shoulder bags. Typically thematic, from Betty Boop to The Joy Luck Club to pin-up girls to the rich enjoyment of different fabrics, each purse is covered in cloth, is hand-beaded and features a small mirror fixed into the inside cover, as well as surprises like miniature Hawaiian shirts or small wrapped gift boxes adhered to the interior.

According to Catherine Alexander, JiJi Lou has so far made some 500 purses, each taking up to three days to complete, and the three women are earning a full living from their one-of-a-kind line. The purses sell for between $36 and $80 depending on the complexity of the design, and JiJi Lou happily takes customized orders. Purses can be ordered by calling 707.544.3110 or through JiJi Lou’s website at www.jijilou.com, and are featured each week once Santa Rosa’s Wednesday Night Market resumes in 2005.

Also anticipated with the resumption of the market are Susan Levinson‘s beautiful beaded necklaces, combining semiprecious stones and crystals with more ordinary beads, thus keeping the cost reasonable while the look remains high (www.slevinsondesign.com); and Karen Smith‘s very clever fiber jewelry, in which she achieves a sort of fairy tale aerie as her threads are literally woven like gold (707.579.3002). . . .

And finally, shopping for items made specifically in the North Bay is a self-confined task at the Sonoma County Museum’s newly revamped Museum Shop because every item for sale is made only by area artists. The compulsively collectible ceramics thrown by nationally acclaimed potter Aletha Soule are given large notice here and are very reasonably priced considering what one would pay at Gumps for the same thing.

But the same thing isn’t possible, as Soule has conceived a line of “black tea” glazes for the work she contributes to the Museum Shop, unavailable elsewhere. The soft, organic forms of Soule’s vases and pitchers are nearly archetypal in their draw; one feels that the form is known in a deep way. But then again, it’s just a pot. Soule’s pieces retail from $56 for a deeply desired green pitcher to $108 for a set of three ardently wanted vases.

From the December 8-14, 2004 issue of Metro, Silicon Valley’s Weekly Newspaper.