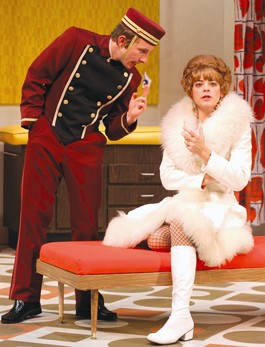 Playwright Joe Orton, by the time he died in 1967, had already shown himself to be uninterested in writing nice, safe comedies. As one might expect from a writer who’d spent six months in prison for vandalizing books in the public library (he replaced their covers with eye-opening variations of his own), Orton was an artist who thrived on upsetting people, but also lived to make them laugh. His plays routinely inspired shock, anger and outrage, and only came to be appreciated as comic masterpieces later, after everyone had finally calmed down. While critics and other authors frequently praised Orton’s work (at his funeral, playwright Harold Pinter called Orton “a bloody marvelous writer”), the theater-going public never knew what to think of his plays, calling them debauched, perverse, disgusting and obscene—while never denying that the stuff was also drop-dead funny.

What the Butler Saw, which has just opened a three-week run at Mill Valley’s Marin Theatre Company, was Orton’s last play. He was murdered by his lover Kenneth Halliwell in 1967 less than a month after completing the script, a mad-cap sex romp set in an English insane asylum. When Butler was finally staged in 1969, audiences called it “filth,” often right in the middle of the production, while the critics proclaimed it ahead of its time. Evidently, they were right.

Ten years later, What the Butler Saw (a euphemism for an English “peep show”) was finally recognized as Orton’s masterpiece, and following a successful run in London in the 1970s has gone on to be seen as the groundbreaking comedy that it is. As evidenced by the current MTC production, Butler, even after 40 years, still has the power to shock, and though seriously dated, it is as outrageously, scandalously funny as ever.

Dr. Prentice (Charles Shaw Robinson, channeling a dry, midlife Peter O’Toole) runs a large mental hospital in London as his sexually adventurous wife (the great Stacy Ross) avoids sex with her husband while pursuing it everywhere else. “You were born with your legs apart,” Dr. Prentice tells her early in the script. “They’ll send you to the grave in a Y-shaped coffin.”

The events of the play are set in motion when Dr. Prentice attempts to trick the virginal, none-too-bright Geraldine (Kat Walleck) into having sex with him as part of her interview for a job at the clinic. When Mrs. Prentice arrives on the scene, forcing the good doctor to hide his now-naked would-be assistant, the young woman’s dress is passed on from character to character as a series of increasingly momentous misunderstandings take place.

These include the participation of a sexually ambiguous bellboy (Rowan Brooks), attempting to blackmail Mrs. Prentice with photos from a distasteful recent rendezvous; the mad psychiatrist Dr. Rance (Andy Murray), who sees everything in terms of its probable psychological aberrance; and a painfully serious policeman (Kevin Rolston) hot on the trail of Sir Winston Churchill’s enormous missing penis, recently lost after a terrorist bombing that destroyed a statue of the good man.

The missing body part may be in the hands (so to speak) of the increasingly distraught Geraldine, committed to the asylum by Dr. Rance, who believes her to have a psychological disorder causing her to take off her clothes in front of strange men. It gets weirder. Much of the material is so of-its-own-era that it hardly makes sense in 2009, what with references to “white tar babies,” use of the word “rape” as interchangeable with sex and the casual use of the term “nymphomania,” long since abandoned by psychologists as sexist and wrongheaded.

Director Amy Glazer is wise to keep the happenings grounded in the ’60s, with superb costuming, set design, and musical interludes that include Tom Jones’ “What’s New Pussycat.” Though clearly a product of an earlier day, the satire is still frequently apt, and the laughs, which come often, are nearly as big as Winston Churchill’s humbling manhood.