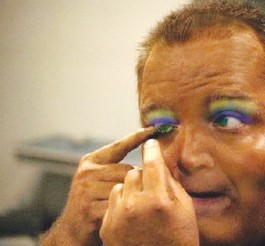 These days, it’s pretty ballsy to appear in public in blackface. Chuck Knipp is just that foolish. His performances have been picketed by protesters in New York, condemned by the mayor of Boston and cancelled coast to coast, from Hartford to Hollywood. He’s been the subject of scorn from radio hosts, from writers at BET and from East Kentucky University, who have banned his act.

Knipp seems to know how far is too far, stopping short at watermelon and fried chicken, and the 47-year-old Kentucky native maintains that he created the character to actually celebrate black women. “If I have to explain to people what my show is about at its deepest levels,” he told Rolling Stone in 2007, “it kind of takes the fun out of it.” He often performs at gay pride events for “the homosexicals” (in Liquor parlance) and has been fiercely defended by RuPaul, who says that those offended by Shirley Q. Liquor are “idiots.”

Politically, in the wake of Proposition 8 and the disconnect its passage underscored between the gay and black communities, an act like Shirley Q. Liquor probably isn’t helping. Culturally, one has to admire Knipp’s shameless bravado while recognizing his social folly, and financially, Knipp is doing all right, his notoriety helping him get hired by famous actresses and country musicians for private events. But the bottom-line question ignored in all the controversy is if Shirley Q. Liquor is at all funny, an adjective easily interchangeable with “outrageous” when dealing with drag acts. Decide for yourself when Shirley Q. Liquor appears on Saturday, June 20, at the Russian River Resort. 16390 Fourth St., Guerneville. 9pm. $10. 707.869.0691.