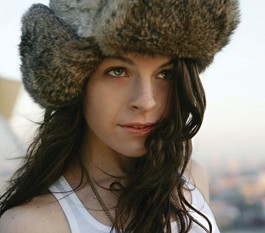 Wherever they are coming from, Jesca Hoop’s new album promises listeners the unexpected. Those unfamiliar with Jesca’s music will probably think, “Gee, this is pretty weird,” while North Bay folk who recall her days with Majesty’s Monkey five or six years ago may think “Wow, this is pretty normal.”

You put Kismet on for the first time and hear “Summetime” (no, not that “Summetime”), which begins with a chorus of Jescas performing the vocal equivalent of sun salutations. But then the chorus commences what can only be described as a gorgeous yodel, the drums come in, and then the song abruptly steps down from sun-kissed bliss into a brief foray into sultry and sticky territory. It’s at once very slick and very unusual.

Hoop’s voice changes shape from song to song—sometimes it has an innocent, girlish quality, while other times she’s diabolically seductive. And sometimes she just sings, such as “Love Is All We Have,” one of Kismet‘s quieter moments. “Seed of Wonder” is Kismet‘s highlight and is perhaps the best distillation of what makes Hoop’s songs so innovative. With nothing but a guitar, percussion and a mass of Hoop’s overdubbed vocals, “Seed of Wonder” treads on Americana folk ballad territory, hip-hop, and Kurt Weil cabaret. With a mess of changes and coming out of nowhere, it’s a song that’s eating its own tail, structurally; you can never figure out where it’s coming from or going to, and therein lies its appeal.

Tom Waits comparisons are going to be unavoidable for Hoop, considering her background, and “Money” is probably the song that will be singled out as most Waitsian, with its Rain Dogs guitar sound. The understated “Silverscreen” begins as a sweet little old-timey ditty, but shifts into territory with just the right edge of menace; it’s both pretty and creepy.

Listeners craving more wackadoo material may be initially crestfallen, but not all of Kismet’s more straightforward material is Kismet’s lush closer, “Love and Love Again” is flush with the swoon of a golden age Broadway tune.

The strongest and most distinctive unifying aspect of Kismet is Hoop’s vocal phrasing, which is not jazzy or improvisational so much as utterly in tune with her creative nerve center; she sustains notes when you expect no notes, and she bundles lyrics up in small spaces when you expect her to stretch them out. Words come out of her in a way that often defies prevailing logic, but, in the context of her music, sounds perfectly natural. You get the sense that no one could sing these songs but her.

It’s going to be interesting to see what audience responds most to Hoop. Though a good chunk of its material is wildly inventive, Kismet is not the kind of record that indie rock critics stumble over themselves to champion; meanwhile, some of Kismet‘s more straightforward songs would not be out of place on adult contemporary radio. Where does this place Hoop? Her talent and singularity are palpable on Kismet, and one can’t help but wonder what she has up her sleeve for the future.