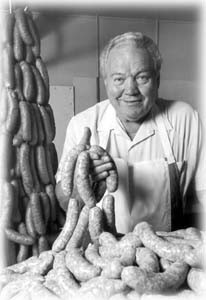 Totally Tubular: Angelo Ibleto even puts broccoli into the mix.

Sausage gets a whole new grind

FRIENDS SCOFF WHEN I CONFESS my love of sausage. They blame my German ancestry or my nostalgia for ballpark red-hots shared with my dad. They conjecture that perhaps its a latent fascination I’m not even aware of for cigars, submarines, and other tubular objects. They shouldn’t. My love is simple: I love good sausage because sausage tastes good. I love it, too, because sausage is the greatest chameleon of foods known to humankind.

A look inside butcher Angelo Ibleto’s cooler proves the point. Next to plump, vacuum-packaged six-packs of bratwurst, linguisa, chorizo, andouille, boudin, Polish, and other traditional sausage fare, sit rafts of turkey-Hawaiian and turkey-cranberry sausage, apple sausage, even turkey-broccoli sausage. These aren’t mere sausages; these are entrées in a casing. They are to hot dogs what filet mignon is to a Whopper.

“To be in business today,” says Ibleto in a rat-a-tat Italian accent, “you’ve got to be a Houdini. You can’t sit around doing nothing, not changing anything, drinking beer all day.” He laughs at the irony, for of course he’s a wine drinker.

Ibleto’s sausages, which he sells out the door of his home butcher shop east of Petaluma, along with his award-winning line of salsas and other condiments, are but a tip in a trend that’s transforming the sausage business nationwide. Stagnant sales, brought by health and diet concerns, of traditional Old World­type sausage drove the industry’s progressives to rethink the entire idea of stuffing seasoned meat into a sheep-gut casing.

Toward the end of the 1980s, Bruce Aidells added to his line of eponymous-branded Cajun sausage specialties (andouille and boudin) with new items seasoned with lemon, sage, basil, and tarragon. He took out the pork and put in chicken or turkey. Over in Napa, Gerhard Twele made his delicious apple-and-chicken sausage a regional breakfast staple. And in the East Bay, Montebello replaced the fat in its sausages with potatoes.

“This is great stuff,” Marconi says, standing beneath a Campari umbrella in front of his ocean-side stand. “This is good food. This is sausage art. This is all the fun stuff the big guys have left behind, and so they’ve left behind the kinds of people who are coming up to me, wanting sausages with tangerines in them, for God’s sake.”

Closer to home, Ibleto, who has been in the meat business more than 20 years, points out the economic necessity of adapting to changing conditions. “There is hardly any beef in the county anymore. Families that used to raise cattle, their children don’t want to do it. City people who come up and buy land, they want to raise horses, not cattle. Over the past 15 years, 27 butcher shops in the county have closed. There are only a few of us left now.”

Changing tastes, too, played a big role. The grease-puddling sausages of yore caused California foodies to dive for cover. It was tough to reconcile bratwurst and arugula.

A few years ago, Ibleto got a call one day from the American Cancer Society. Could he come up with a “healthy” sausage for an ACS banquet? The president of the United States helped him out. The day before, George Bush had made the comment that since he had become the leader of the free world, he didn’t have to eat broccoli anymore. Angelo knew that if Bush–famously known for snacking on fried pork rinds–didn’t like it, it was probably healthy. He bought a crate of broccoli at a local super, diced the florets, and threw them into a mix of ground turkey and spices. At the banquet he got raves all around for the new sausage, and his turkey-broccoli link remains one of his best sellers.

Its success, in fact, set Ibleto on a new course. For the next Christmas he made a piquant, sweet-and-peppery turkey-cranberry sausage, and it flew out of his shop. Now he keeps it in stock year-round. Other exotic combinations soon followed: a turkey Italian sausage enhanced with Sebastopol apples; another Italian-style sausage flavored with sun-dried tomatoes and more apples; and a sweet-and-sour turkey “Hawaiian” link. “I’ll probably try a vegetarian sausage next,” he says. “People come here and tell me they’re vegetarian. I say, ‘What are you doing in a butcher shop?’ But if I can make something to make them come back, I should.” He watches me enjoy a succulent slice of mild pork Louisiana sausage, hot off the grill. “I am glad that you are not a vegetarian. Some writers are, you know.”

Ibleto makes sausage in 350-pound batches two days a week. The old, enameled Hobart grinder he uses isn’t much larger than a big sink–this is cozy, hands-on manufacturing. And like any sausage man of pride, Ibleto is finicky about his raw materials, buying beef only from Harris Ranch and pork from the Midwest. He specifies lean cuts of both, and none of his traditional sausages drizzle fat the way links from big-name processors do.

I’ve seen an Oscar Mayer plant grind out more sausage in one minute than Ibleto will in his lifetime. He couldn’t care less. The giants of the industry are in some other business.

For his part, Ibleto has begun re-experimenting with tradition. Just before I leave his shop he waves me into a back room with the enthusiasm of a kid showing off a secret hiding place. He points to the ceiling. “My new ones,” he says, smiling.

A half-dozen moldy white tubes dangle from a rail–examples of pure sausage-making craft, Italian dry salami. A wondrous product. He cuts one down, peels back the paper, knifes off a few slices. They tingle and explode in my mouth, the best salami I’ve had since a trip to the Mediterranean years ago. Ibleto watches my face. He knows. I may be standing in a shop east of Petaluma, but my tongue is enjoying a stroll on the Italian Riviera.

From the May 29-June 4, 1997 issue of the Sonoma County Independent