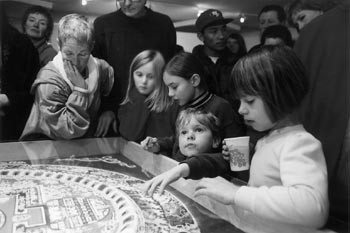 WITH A CHOCOLATE CHIP cookie stuck solidly out of his mouth like an elongated third lip, a young boy of about 10 with sandy-colored hair and a freckled face stretches his hands out over a clear sheet of Plexiglas, momentarily oblivious to the steamy press of the crowd or the sweatshirted friend standing beside him.

Protected below the sheet is a religious icon, a sacred mandala made completely of colored sand, on which two Tibetan monks have labored at Santa Rosa’s California Museum of Art five days a week, eight hours a day, for over a month, using small brushes and slender metal tubes to gentle their materials into place.

Resting on a raised platform some four feet above the ground, atop a six-by-six-foot red pedestal built by local painter Alv Wilenius, the circular mandala features reproductions of skulls, tigers, flames, billowy white scalloping, rainbowed gradations of color, and mysterious images relevant to Buddhism. At opposed corners of the square pedestal are Tibetan words elegantly scripted in black sand on the red surface.

In the mandala’s center is a small square blue box, rising some three inches from the work’s surface. The grit of the sand glitters under the strong focus of the museum’s track lighting, giving the mandala an appealing sugary quality. In fact, seen from a step back, the piece has the sweet-toothed beauty of a gorgeous topping to a party cake.

“Cool,” says the boy, as he points down to the Plexiglas. “No glue, no nothing. Just sand.”

Taking a sip of sparkling apple cider from a paper cup, his friend nods, their two blonde heads close together for a second. “Cool,” he echoes solemnly.

ACTUALLY, it was anything but cool Jan. 5 in the museum’s main gallery as hundreds of people hotly pressed in to view the two monks from Kathmandu destroy the work that they had so painstakingly created.

As a tribute to the members of Sebastopol’s Healing Buddha Foundation–a local sangha devoted to Lama Shakya Zhangto’s integration of ancient tantric principles and healing techniques–who have raised some $100,000 to help the monks of the Segyu order purchase the land on which their languishing monastery is situated, the mandala was erected and destroyed in the name of beauty.

Established in 1419, the Segyu monastery was ravaged in 1959 when the Chinese invaded Tibet. Forty monks survived the razing and fled on foot across the Himalayas to India. Eight of those monks are alive today, able to accommodate only a few novices in their cramped and reduced quarters in Kathmandu, their lineage of learning endangered. When Lama Zhangto learned of their plight, he helped two of the order travel here to raise funds.

The fleeting glory of the mandala is their thanks.

Suddenly the monks, clad in red and gold robes, appear alongside their creation. Speaking no English, they firmly rub the cheeks of the “Cool” kids, moving the children gently aside to get close to the mandala. Zhangto motions the men to join him in the center of the room, and after a brief introduction he begins to speak of the importance of recognizing the small brilliant beauty of each and every moment. The crowd, peopled with children, seekers, older folks, and local artists, quiets down on the floor or leans against the walls.

“To be human is not to just carry a head or hair or clothes,” Zhangto says, “but to have a mind and to see. You can see in various ways: You can see with a mind full of afflictions or you can see in a state of joy. If you see with your mind afflicted, you see nothing, just distraction.

“America is the most wonderful country in the world, but we are not happy. Maybe we can be happy for a couple of hours–maybe,” he says with a mischievous grin, adjusting his red- and saffron-colored robes, “when we have a pint of Ben & Jerry’s ice cream–but the rest of the time, we are seeking more.

Exhorting the listeners to absorb the “seeds of beauty” planted in the mind by viewing the mandala, Zhangto motions the monks to the pedestal to begin the destruction. The Plexiglas lid is removed, and the younger of the two carefully works at a smudge of black sand left near the Tibetan writing, honing it down as though the whole piece weren’t poised for erasure.

The older monk rings a bell and begins pinching off small piles of sand, taking from each side with geometric precision. He places these small grains onto a slender silver disc now held by the younger man. Next, holding a silver globe reminiscent of an incense dispenser used in the Russian Orthodox tradition, the older monk begins to score the mandala. The grit grinds loudly against the table.

The crowd, heretofore so silent and respectful, grows oddly restive as the sand images are ground down. Perhaps it is the horrible thrill of seeing something of such rarity and time being literally rubbed out.

“Down in front!” a woman demands. “Can you please move somewhere else?” another asks a video camera operator. “I can’t see!” someone complains from the back.

On grinds the sand, raising a fine powdery dust from the table as the monk vigorously scrapes each scallop, each tiger, each brilliantly wrought flame down into a fine grey mass.

Fireplace tools are brought to the pedestal. All three monks, Zhangto included, sweep and fine down the sand, piling it up like a homemade crematory for deposit in an ordinary florist’s vase. The vase is wrapped in white silk, tied, and double tied–Zhangto pulling scarves from his sleeves like a magician. Thus shrouded, the vase is placed back upon the blue box, the lone surviving artifact of the mandala. Tradition dictates that the sand be returned to the sea.

Zhangto turns to the crowd. “Those beautiful colors when mixed together are grey,” he observes. “If we cloud our mind with conflicted emotions, it is grey. But,” he pauses to smile at the hundreds of faces looking expectantly at him, “if we allow ourselves to think clearly, we can see all of those beautiful colors.”

All in the mind.

From the January 8-14, 1998 issue of the Sonoma County Independent.