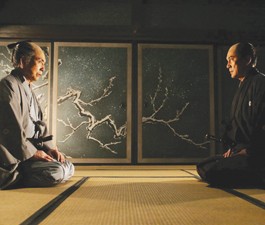 Takashi Miike’s hit film 13 Assassins mulls over something novel in a samurai film: how terrible it is to be transfixed by a sword, and how much a man has to mentally prepare himself for the possibility.

It’s the middle of the 1800s. Samurai are accustomed to their rank as mere decoration, requiring no duties, and none is ready for what sword-fighting entails. Miike shows us what that means by opening the film with an elder noble (Uchino Masaaki) committing an act of seppuku in political protest. It takes some nerve-steadying for the old man to commit the disgusting yet unavoidable task.

The self-murder is the last straw in a national crisis. The shogun’s brother, Lord Naritsugu (Goro Inagaki), is a Caligula who rapes and mutilates anyone he pleases. Recruited to do something is Shinzaemon, played by Koji Yakusho, maybe the most stirring Japanese actor since Mifune. (Yakusho resembles Patrick Stewart, with an aura of authority that matches a personal mildness.) It falls to Shinzaemon to organize an ambush that can strike and wipe out this highly placed madman. Essential to the assassination will be outwitting the psycho’s all-too-sane general (Masachika Ichimura).

The time-honored mixed bag is assembled. Most flamboyant is Yusuke Iseya as a mosquito-bitten hunter who is lethal with a rock in a sling. There’s also a suave gambler (Shinzaemon’s easy-going nephew) and the usual mercenary ronin.

13 Assassins is capped with a battle lasting some 45 minutes. Takeshi dreams up a long, muddy siege with huge man-traps that corral the troops, and firebombs that burn them alive. The ultimate lesson here is that war is less glorious than it sounds. That’s nothing new. But it’s Koji’s gravity we take with us, and the shock of the battle, more a brutal slamdance than a Kurosawa ballet.