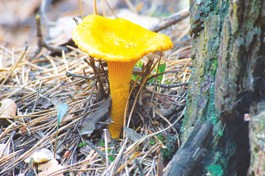 Chanterelles need oaks, but the oaks are dying. What about the mushrooms?

As another spring takes hold and edges into the onset of summer, Bay Area chanterelle hunters have rarely been so let down. Due in part to the tardiness of the autumn rains as well as the bone-dry January, the harvest this year, especially in Marin County, was among the worst on record, according to veteran collectors.

But in some regions, low rainfall is the least of the problems affecting chanterelle output. If there is one thing Cantharellus californicus—only recently named as such—needs more than water, it’s oak trees, but the oaks are vanishing. The disappearance comes at the hands of humans as well as a microscopic pathogen, Phytophthora ramorum, which causes the infamous sudden oak death in three species of oaks and their relative, the tanoak.

Sudden oak death has hit Marin County particularly hard. David Campbell of San Rafael, who once sat as president of the Mycological Society of San Francisco, has hunted chanterelles every season in Marin for 25 years. In those decades he has isolated scores of favorite patches in which the mushrooms reliably fruit, but about five years ago Campbell first observed a lag in chanterelle production. About the same time, he began noticing sick trees on his regular mushroom hikes. Two to three years ago, he recalls, they appeared to be dying.

“I got zero,’ he says. “Virtually all my patches are now done.’

There is little hope of developing a cure for sudden oak death, according to Matteo Garbelotto, a UC Berkeley professor and specialist in forest pathology and mycology.

“We’re looking at something that’s not going away,’ says Garbelotto. “The number of infected trees is so huge that we have almost no chance of stopping this.’

In California, the epidemic is most severe in western Marin and in the hills of the Big Sur coast, says Garbelotto, if only because the bacteria appeared in those regions first, but eventually all oak country may become infected. Or maybe not. A wide swath of oak country between central Napa County and Humboldt County has gone mysteriously uninfected, according to Janice Alexander, an outreach coordinator at the UC Davis extension office in Novato. She and other researchers have their eyes on the region, wondering if clues toward developing a treatment lie somewhere within. Meanwhile, a common foliar spray called Agri-Fos can fend off infection, but the manual application is only a preventative measure not a cure.

Commercial hunters made pocket change off the 2009 chanterelle crop. Connie Green, a Napa-based harvester of 30-plus years and the proprietor of Wine Forest Mushrooms, says that, although her favorite chanterelle patches are still uninfected by sudden oak death, this winter was the second worst in her memory. She reeled in only a quarter-ton, what is essentially a crop failure compared to her long-term seasonal average of 3,000 pounds. She attributes the meager harvest to the dry spring of 2008, the late fall rains and a rainless January.

But while drought conditions simply put mushroom appearance on hiatus, land development outright kills it, and in the past decade Green has watched roughly 200 acres of Northern California chanterelle country—including some trees as old as 400 years—go under to the progress of the wine industry. Other mushroom lovers also point the finger at the wine industry. Ken Litchfield, an organic farmer in the East Bay hills and a mushroom hobbyist and lecturer, feels that sudden oak death is an easy culprit at which to point the finger, but grapevines, he says, are far deadlier.

But Green has observed a recent deceleration in North Bay vineyard plantings, and, sure enough, according to data provided by the Wine Institute, growers in Marin, Sonoma and Napa counties planted over 1,300 acres of vines in 2006. Some almost certainly replaced oak groves, but in 2007 the conversion slowed; in the same region, just 400 new acres of wine grapes took root.

“Our economy seems to be taking care of the development problem,’ Green notes.

As the blazing North Bay summer approaches, Green hopes for one last deluge of rain to dampen the soil and give the dormant chanterelles one final shot of juice to pull them through the dry season. Ironically, however, in regions affected by sudden oak death, rainfall in the warmer months like May is exactly what Phytophthora ramorum needs to spread outward to new hosts, experts say.