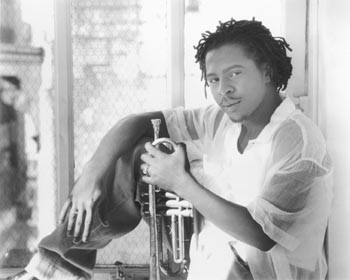 Leader of the pack: Roy Hargrove is back with a new album of ballads–with strings–and an upcoming appearance at this year’s Russian River Jazz Festival.

“I’VE ALWAYS wanted to do a ballad project,” says trumpet player Roy Hargrove, 30, a hard-bop player who has just released his first collection of songs with strings–usually a hallmark of only the most serious ballad players. “Whenever I perform ballads in live sets, people respond. So I thought it would be a good idea to devote a whole album to ballads. I’ve always loved those kinds of albums, especially John Coltrane’s and those ballads-with-strings albums by Clifford Brown and Donald Byrd.”

The CD includes covers of such standards as the Sammy Cahn/Jules Styne gem “I Fall in Love Too Easily,” Johnny Mandel’s “A Time for Love,” Jimmy Dorsey’s “I’m Glad There Is You,” and the Henry Mancini/Johnny Mercer&-penned title track. In addition, Hargrove lends his touch to Pat Metheny’s “Always and Forever” and Antonio Carlos Jobim’s “How Sensitive,” as well as the original composition “Natural Wonders.”

His departure from hard bop has drawn mixed reviews. Jazz critic Richard Ginell of the All Music Guide praised much of Hargrove’s playing on the disc–the follow-up to 1997’s highly acclaimed Habana, a foray into Cuban jazz–as “gorgeous.” But he added that the trumpet player’s “undoubted sincerity and musicality go only a limited distance over the 68-minute span of the CD before simply repeating themselves out. CDs like this make one wish that the 10″ LP was back; that time frame was just long enough for some of jazz’s best string albums of the past.”

Hargrove recorded Moment to Moment at Red Barn Studios (owned by Al Jardine of the Beach Boys), just 200 yards from the secluded Pfeiffer Beach in Big Sur. “It’s such a beautiful place, and that added to the vibe of the sessions,” he says.

The Bay Area has become a second home for Hargrove, a Texas native who resides in New York. In recent years, he has performed regularly at the Russian River Jazz Festival (where he returns on Sept. 17), and the Monterey and Big Sur jazz festivals.

On the weeks when Hargrove isn’t on the road, the area has become a favorite vacation destination.

HARGROVE’S rise on the jazz scene has been meteoric, placing him at the front of the pack of young jazz lions. He grew up in Dallas, an inquisitive kid who read voraciously and once thought of becoming a psychologist. The trumpet changed all that. At age 9, he joined an elementary school band and immediately realized that the horn was something special.

“From the very beginning, I was turned on to improvisation with roots within the blues,” he explains. “I was very impressed that the kids would get up and take improvised solos. When I saw that, I said, ‘Yeah, this is what I want to do.’ I was inspired to practice a lot because I wanted to do better than everyone else.

“I wanted to make a difference and really stand out.”

As a teen, Hargrove attended Booker T. Washington High School in Dallas, a renowned performing arts school. “That’s where I started finding out about trumpet players like Clifford Brown, Lee Morgan, Freddie Hubbard, Fats Navarro, and Blue Mitchell–and, of course, Miles Davis and Dizzy Gillespie,” he says. “That’s also when I really started listening to acoustic jazz, because before that I had a really different sense of what jazz was, since I listened to the radio. And what they call jazz on the radio in Dallas really is electronic music or fusion or whatever you want to call it. But when I started hearing these other cats play on their recordings, it just turned my whole head around.

“I mean, when I heard Clifford Brown, I went insane,” he adds with a laugh.

All that rehearsal paid off. Hargrove met Wynton Marsalis in 1987 when the jazz star visited his high school and allowed Hargrove to sit in with his band. Soon afterward, and with Marsalis’ help, Hargrove began playing with Superblue, as well as with such talented players as saxophonist Bobby Watson.

He attended the prestigious Berklee School of Music in the 1980s.

With his 1990 recording debut, Diamond in the Rough (RCA/Novus), Hargrove unleashed a set of full-blown instrumental chops that rivaled those of Marsalis, Terence Blanchard, Wallace Roney, or any one of the other media darlings mining the same so-called neoconservative vein of acoustic, traditional jazz. A series of hard bop excursions with saxophonist Antonio Hart followed. While Hargrove’s playing may have lacked the polish of his more established peers, he still caught the collective ear of the jazz community with riveting, rafter-rattling solos and a loose, lyrical groove that must leave other Young Turks green with envy.

The years of woodshedding, playing the summer jazz festival circuit (with the likes of Frank Morgan and Art Blakey), and supplementing his after-hours jam sessions in Greenwich Village helped put Hargrove’s career on the fast track. In 1991, Hargrove marked his unofficial coming out at Carnegie Hall, where he played alongside legendary tenor saxophonist Sonny Rollins.

It was a heady experience for the then 21-year-old Hargrove.

“I’d always dreamed of playing with someone like Sonny Rollins, and when I finally got a chance to be up there with him, I just couldn’t believe it,” he recalls with a laugh. “It was very exciting because he’s a real unpredictable player. He throws a lot of curves, and you have to really stay on your toes to hang in there with him.”

Hargrove passed muster. Indeed, his increasing notoriety led to a bidding war–if such a thing exists in the relatively low-budget jazz world–that landed him in 1994 at Verve Records, a seasoned company that after 50 years had re-emerged as the world’s premier jazz label. His first release for Verve, Roy Hargrove Quintet with the Tenors of Our Time, teamed the trumpeter with such heavy-hitting tenor sax players as Joe Henderson, Stanley Turrentine, Johnny Griffin, Branford Marsalis, and Joshua Redman.

“It was a real learning experience,” Hargove says, reverentially. “There’s nothing like actually being there and having the experience of playing with someone you always used to listen to. You never forget that. It stays with you.”

And just what did he learn?

“It’s hard to describe, but playing along with, or even just standing next to, someone like Joe Henderson or Johnny Griffin is astounding,” he says. “You learn a lot listening to how they approach what they play, whether it is where they leave spaces, or where they take a breath, or how they hold the instrument, or even what they choose not to play.

“And, of course, there are all those great stories they tell in between tunes.”

Just a few short years after his discovery, Hargrove was playing with Dizzy Gillespie, being hailed in the press as a young Clifford Brown, and picking up a 1995 Downbeat Readers’ Poll spot as best jazz trumpeter. He’s even being compared to a young Miles Davis. “It’s very flattering, but there will never be another Miles Davis,” he says, modestly. “Still, it’s flattering because these are people I really look up to and try to emulate.”

And where does he think the music is headed now that most of the originators of bebop are dead?

“It’s true that those people are gone from the physical realm, but they still live within our hearts and our souls,” he says. “I think that people like Miles and Dizzy left a long legacy of music for us to continue to study and to learn about. The music itself is timeless, so it will never be gone or get old. I mean, there are recordings by them that I listen to over and over again, and each time I hear something new.”

“What I try to do is apply all the knowledge I’ve gotten from them with my own feeling, my own emotions, and bring that as lyrically as possible through the bell of my trumpet.”