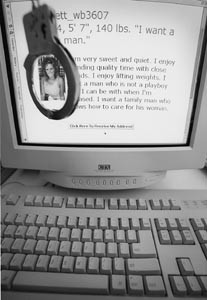 RONALD BISHOP’S marriage of 20 years collapsed nine years ago. Since then there have been many lonely moments, he says. So when the 53-year-old oil-processing supervisor from Liberty, Texas, hooked up with Carol Sevilla, he was elated. Now he has someone to cherish on Valentine’s Day, someone special to hang up a stocking for on Christmas, and a partner with whom to share life’s disappointments and victories. “She’s the best thing that’s happened to me,” Bishop says. “We’re in love.”

Bishop, however, has never met Sevilla.

That’s because Sevilla, 25, is an inmate at the California Correctional Women’s Facility in Chowchilla, Calif., where she is serving time for second-degree robbery. She and Bishop have corresponded since he obtained her address 10 months ago from an online dating service called Prisonbabes.com. Bishop says that once Sevilla is released, they plan to live together in Texas.

Prisonbabes is one of a handful of online services that match men with young single women behind bars. Most sites include pictures of the women, as well as their biographical profiles and release dates. Criminal records are not provided. Clients choose whom they’d like to correspond with, then pay a small fee for the address. After that, they’re on their own to write letters, make calls, and arrange visits.

Use of the service has led to six marriages and many happy relationships, according to Prisonbabes’ founder, Skip Harris, 36, of Stockton, Calif.

But Kim Gandy, executive vice president of the National Organization for Women, says the sites “attempt to exploit women in difficult circumstances.”

She’s not the only one voicing concern. Some clients complain that they are the ones being victimized by dishonest prisoners, while some psychologists question whether the relationships are healthy.

THE INSPIRATION for Jailbabes .com, another online service, came in a flash for its founder, Ken Klein. After being dismissed from his paralegal job, Klein, 63, of Orange County, Calif., was looking for work. When a friend who had been in prison mentioned the loneliness she felt while incarcerated, Klein had his idea. The former inmate offered to round up some prison friends to participate, they passed on the word to other inmates, and in 1997 Jailbabes was born.

The site’s success can be explained in part by the glut of young single women in jail, he says. Many women get in trouble early on in their lives, Klein says, because “they come from broken homes and may not have had any place to go after high school, if they went to high school at all.”

That explains the supply. But the demand is fueled by other factors.

Referring to his “jailbabes,” Klein says, “You don’t have to buy them lavish presents or jewelry. That’s not allowed. But you can talk about sex, politics, or religion and have a chance to see if there’s any chemistry.”

Corey Habben, a clinical psychologist in the Chicago area who specializes in men’s issues, says there’s a less elaborate explanation for the attraction: desperation.

“The prospect of going to a club or bar to meet someone,” he says, “is more daunting than having a captive audience.”

Fantasy or real love? The attraction might also have its roots in men’s sexual fantasies, according to John Ross, a clinical professor of psychology at Columbia University’s College of Physicians and Surgeons in New York whose areas of expertise include men’s sexuality and sexual fantasies.

“The whole culture puts a kind of premium on kinkiness and breaking all sorts of taboos,” Dr. Ross says. “This would be one sort of major taboo to be broken, to be involved with a woman who’s a criminal.”

Yet another explanation is offered by Wayne Myers, a professor of psychiatry at Cornell University’s Weil College of Medicine in New York. He says that while women have been known to start romances with murderers and other hardened criminals because of the “danger aspect of it,” the case of men being attracted to women behind bars is an entirely different matter.

“It’s very much rescuing the fallen woman, the damsel in distress,” says Myers, who is a sex addict expert. “You are saving the [woman] from the state she has fallen to and you’re going to bring her back from her fallen state, back to respectability. And therefore you become very manly. There’s a sense of hyperpotency there.”

But according to Gary, a 34-year-old information technology salesman from Anaheim, Calif., who declined to give his last name, a relationship with an incarcerated woman is not very different from any other relationship.

He met “Lisa,” who also is an inmate at the Chowchilla, Calif., prison, a couple of months ago while using the Jailbabes service and has been corresponding with her since.

“It’s something that absolutely just clicked,” he says. “We’re attracted to each other, and I get a good sense that we want the same things.”

Can these women be trusted? Some relationships fostered through the services seem to be on shaky ground.

Bishop, the Texan, says that his girlfriend, Sevilla, told him she is Asian, has only been in prison three years, and is to be released in December of 2001, at which point she will move to Texas to start her life anew with him.

But Margot Bach, a spokeswoman for the California Department of Corrections, which operates the prison in which Sevilla is incarcerated, tells a different story.

According to prison records, Sevilla is an illegal immigrant from Honduras serving an eight-year term. Her earliest possible release date is February 2003.

BACH SAYS that California inmates must generally serve a three-year parole period in their counties of residence, which in Sevilla’s case is Los Angeles. But since Sevilla is an illegal immigrant, when she does come up for parole the Immigration and Naturalization Service may deport her, Bach says.

That’s no surprise to David Smith, a 58-year-old computer programmer from Hartford, Conn., who has contacted eight or nine incarcerated women over the past two years using various services. He says that although he has now found a stable relationship using one of the services, he had been lied to repeatedly by other women.

“The big problem,” he says, “is that many of these girls are writing many guys, sometimes between 15 and 20 of them, and promising to marry five or six of them.”

The motivation, he says, is money. Except in the case of his current mate, every woman he has written to has asked for cash in her first letter.

Harris, the founder of Prisonbabes, says he does not check the accuracy of the claims made by women on the service, but regrets any dishonesty on their part. Klein, the operator of Jailbabes, says he makes inquiries only when he comes across information that appears “suspicious.”

That is of little consolation to Bishop. When told of the discrepancies between what the California Department of Corrections had to say about her records and what Sevilla told him, Bishop says, “Looks like the service ought to have dug a little deeper rather than just taking her word for it.”

But even if Sevilla lied, “I can understand that,” he says. “There are things I haven’t wanted to tell her either. This really doesn’t change nothing.”