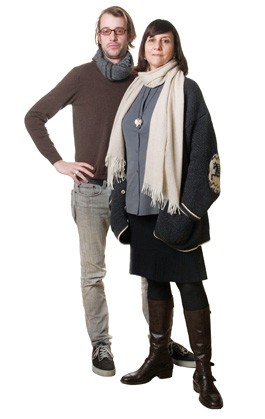 Healdsburg's Barndiva matches the farm to the table to the arts

When Jil Hale and her husband, Geoffrey, decided to open a restaurant in Healdsburg in 2004, it was mostly because they needed a place to go. Nothing in town at the time was open later than 9pm. There was nowhere a diner could simply have a cocktail and a small plate while her companion enjoyed a large full-service meal, and no place where the two of them could return to hang out with the dog over the newspaper and a bun on a sunny Sunday morning. No place to fall in the door unannounced at 8:30pm with nine friends. At least not all in the same restaurant.

And so, while certainly a labor of love, their Barndiva Restaurant is also a pragmatic choice. It gave the family, which soon included son Lukka, now 32, as events manager, the kind of establishment they were all used to visiting in Europe, where they had lived for almost two decades.

Over the last six years, Barndiva has naturally evolved and—as an aesthetic, a concept and a community engine—it has certainly grown. Jil and Lukka, who are the most visible members of the operation, chose Healdsburg for its proximity to the family’s Italian-style ranch in Philo, which they say was originally planted with nearly everything a household would need to be self-sustaining. “But we’ve never,” Jil stresses, “had to live off of the farm.”

Instead, the family has supported itself through design and architecture and photography and writing pursuits, all of which are in full flower in the signature barn structure they built to house the restaurant, replete with an upstairs apartment over the dining room and an objets shop, Artists & Farmers, next door.

They have established their own four-suite boutique hostelry, Healdsburg Modern Cottages, across the town plaza. And everything comes close to full circle with their co-founding of Fork & Shovel, a cooperative organization devoted to matching farmers up with the restaurateurs who will use their products in the highest volume for the best prices on a regular, count-on-it basis, an idea that seems like a natural fit but has turned out to be more complicated than anyone might have imagined.

Termed an “internet grange,” Fork & Shovel matches producers with purveyors outside of the pricey farmers market system, allowing chefs to reserve, say, the amount of chiogga beets they need from a farmer when that harvest is ready, and allowing the farmer the relief of knowing that each bunch of beets will be sold. And it reflects the original intent of Barndiva, a name that Jil says was prompted by language itself. “When you think of a diva, what do you think of?” she asks rhetorically. “You think of opera, of course, and of movies. We wanted to celebrate the farmers and producers and real people of our community. They’re divas to us.”

Early on, Jil and Lukka realized that if the restaurant were to stay solvent, it would have to repose in a crucial place in the community’s heart. While tourists abound in the summer, they can’t support a year-round operation. Plus, tourists rarely become your friends. With Jil running an innovative cocktail program and Lukka increasingly involved in the weddings and catered parties that fill the Barndiva’s capacious gardens from May to November, it became clear that even with a local customer base and a devotion to the area food shed, what the restaurant needed was a solid cooking team.

Former French Laundry alumnus Ryan Fancher took over as chef de cuisine last year, returning to the North Bay after opening Thomas Keller’s acclaimed New York City outpost, Per Se. Pastry chef Tracy Mattson is formerly of Cyrus. The team is professional and innovative and dedicated to local tastes, offering a casual family-style meal each Wednesday that begins at 5:30pm and ends when the “food runs out.” Fancher has recently started a pasta program on Sunday nights that features an enormous bowl of hand-made noodles sauced with whatever is freshest for just $15.

“I’m so proud that Ryan is here,” Jil says, “but we wanted it to be about Barndiva. Alice Waters rarely cooked at Chez Panisse. We want it to be about art, music, food and drink, and dining.”

The idea is family, the idea is local, the idea is sustainability—both for the planet and for the community. “Sometimes,” Jil says, “the things that we do in life don’t come from our hearts. But this,” she turns to smile at son Lukka, “does.”

To the Fourth Dimension