'Us:' Visit the Santa Cruz Beach Boardwalk —it's a scream! By Richard von Busack 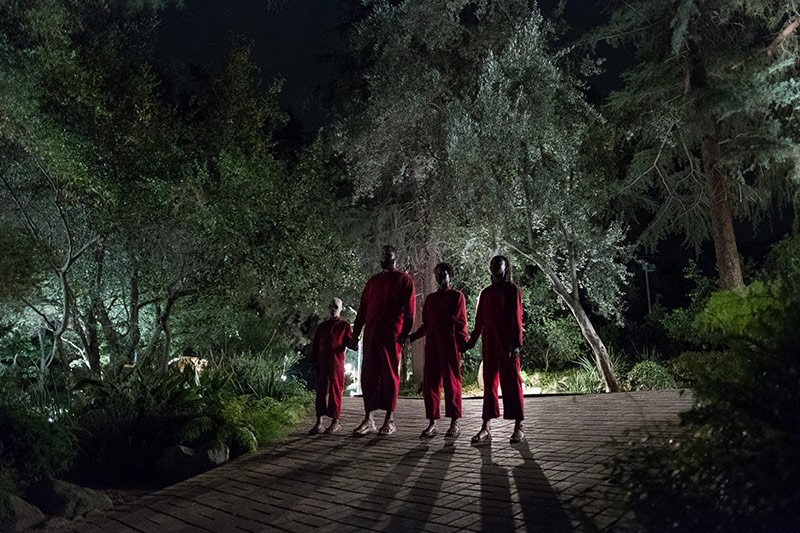 It’s not Avon calling The new neighbors are strangely familiar in ‘Us.’

Break out your decoder rings; the flawed but intriguing Us‘s political subtleness is hidden by its straightforward terror.

Among other things, Jordan Peele’s follow up to Get Out breaks a long drought. Santa Cruz, with its deep cold bay and hoodooed mountains, ought to be California’s Transylvania. But there hasn’t been a good movie made there since Killer Klowns from Outer Space (1988). Now the curse is lifted, even if much of Us is shot at a lake in the San Bernardino Mountains.

There’s a strange ride at the boardwalk that most visitors fail to notice. In 1986, young Adelaide slips away from her family and wanders into “The Shaman’s Cave.” Passing an old derelict holding up a cardboard sign with a particularly vicious Bible verse (“Jeremiah 11:11”), she enters. An electric owl calls her name. Amid the hall of mirrors, her identical double awaits.

Somehow she survived. In our present, she (Lupita Nyong’o) is a calm, pretty mom married to a living dad-joke, Gabe Wilson (Winston Duke, of Black Panther). Two kids: one a monkey-mask-loving naughty little boy Jason (Evan Alex), the elder, a disdainful daughter Zora (Shahadi Wright Joseph). They are as tight as the quartet of stick figures on the back window of their SUV.

The “Shaman’s Cave” is still on the beach 30 years later, with a new paint job. It’s Arthurian now instead of Native American. The doorway beckons young Jason.

That night, as the Wilsons go to bed, the power goes off. Standing in the driveway are four figures in red jumpsuits, smiling maliciously, armed with long sharp scissors. Jason’s monkeyish double is crouched on all fours. On his face is what the burn-ward doctors call a “TFO mask”—so you’ll know what to ask for next Halloween. At some cost, the family gives their captors the slip. But they’re not the only ones visited tonight.

The film’s suggestiveness is in the title, which could be misread “U.S.”; what will be the fate of a society divided between influencers and the influenced? Deeper analysis of Us will be deserved.

‘Us’ is playing in wide release.