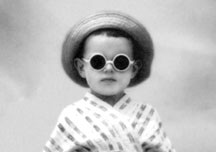 Round Eyes in the Middle Kingdom

A Polish Jew hits
the road with Mao

“NEVER THE TWAIN shall meet,” predicted Rudyard Kipling of East and West, a statement often quoted to express the supposedly alien and irreconcilable natures of the Orient and Occident. But if it’s true, then what is one to make of Israel Epstein, the subject of the fascinating new documentary Round Eyes in the Middle Kingdom?

Born in Poland, Epstein migrated with his radical Jewish parents to China when he was 2 years old. His family became part of the large community of Western expatriates living there during the strife-torn ’20s and ’30s. But when most foreigners fled the country during or after the 1949 revolution that brought Mao Zedong to power, young Epstein became a Chinese citizen and opted to remain, throwing his lot in with Communism, which he saw as the Chinese people’s best hope for peace and dignity . “There are lots of Asian Americans, so why not a non-Asian Chinese?” Epstein asks rhetorically in the film.

The answer to the “why” is a choice that has puzzled filmmaker Ron Levaco for nearly half a century. Interwoven with Epstein’s story are the circumstances of Levaco’s own early childhood as an Eastern European Jewish child in China–where he lived from his birth in 1940 until his immigration to the United States after the revolution. “There’s no question the story of Epstein had haunted me since childhood,” says Levaco of this family friend, “because my father, who was very much a capitalist, was so much the opposite of this gnomish, enigmatic man that I couldn’t understand why my father felt so close to him.

“And I discovered that the link between the two men was heart. Both men were very compassionate toward the Chinese people, but my father didn’t have the political world view or the impetus to figure out how to cope with these problems he saw.”

While Levaco père may not have followed his friend Epstein’s path of revolutionary solidarity, his perspective, too, can be found in Round Eyes, in still photos and 8mm film footage interspersed among the archival footage and interviews with Epstein that collectively make up the film.

More difficult than inserting his own family memories into the narrative was Levaco’s subject, who proved to be difficult to contact and wary of being interviewed. And what is one to make of a man who, despite being kept in solitary confinement for five years during the paroxysms of the Cultural Revolution, continues to defend the Chinese government and admonishes the filmmaker not to focus too much on his imprisonment because “it’s only a small part of the larger story”?

“I have a very tangled sense of Epstein,” Levaco admits. “On the one hand, I understand him to be incredibly rigid, but I imagine if we sat down with Mother Teresa or Albert Schweitzer we’d find them to be pretty rigid, too. I think that a person who is deeply committed to a cause, and sees that cause like a shining beacon in the dark, will roll right over a lot of questions, like how he felt about being in prison.

“It was my task also to try and present this man as fairly as I could, so he wouldn’t think I’d done some hatchet job, yet at the same time to present to a Western audience this Communist who supported a revolution which, a few years later, saw Chinese pilots in Mig-15s shooting down our guys in Korea. We’re talking about an enemy.”

Though not as tortured as Epstein’s, Levaco’s own path toward making Round Eyes was nonetheless a convoluted one, including a 25-year detour as a professor of film theory at San Francisco State University. “When you go into a film Ph.D. program, you usually have to put your camera down in favor of research,” explains Levaco, whose own research included the definitive book on Lev Kuleshov, early Soviet filmmaker and montage theory pioneer. “And that deferral was very painful to me.”

Levaco now spends most of his time lining up theatrical and television venues for Round Eyes to play. “I hope the audience will be put on the horns of a dilemma,” he says, “and will realize that sometimes this life presents us with extremely difficult political choices, like Epstein’s choice between [anti-Communist Kuomintang leader] Chiang Kai-shek and Mao Zedong.

“Mao turned out in many ways to have been a monster, but at the moment of that choice, like going down a river that suddenly forks, you’ve got to take the fork that looks best at the time and follow it down to wherever it leads.”

That the viewer leaves the theater understanding and even sympathizing with Epstein’s own “political ‘Sophie’s choice,'” in Levaco’s words, is a testament to Round Eyes‘ power and achievement. And despite the impressive foreignness of the setting and the enigmatic nature of Epstein himself, his decision comes across as a choice grounded not in the peculiarities of Chinese or Jewish culture or Marxist ideology, but in a universal human sympathy for the oppressed and mistreated.

Indeed, by the end of Round Eyes one may be reminded of the other, lesser-known half of Kipling’s quote, which, like Levaco’s film, celebrates the impulses that transcend the barriers of culture and geography: “But there is neither East nor West, border, nor breed, nor birth/ When two strong men stand face to face, though they come from the ends of the earth!”