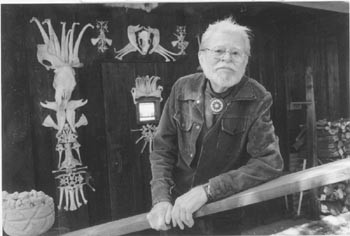 AS THEY SAY, “Home is where the art is.” For over 50 years now, home for artist Robert McChesney has been atop Petaluma’s Sonoma Mountain, but seldom has his work been exhibited in Sonoma County. Instead, the abstract expressionist’s paintings and assemblages have met art lovers abroad or in such museums as New York’s Whitney, the San Francisco Museum of Modern Art, and the Art Institute of Chicago.

Starting Friday, July 14, however, “Robert McChesney: An American Painter” goes on exhibit at Santa Rosa’s Kress Building. The six-week retrospective features nearly 70 paintings and represents half a century of the 88-year-old artist’s oeuvre. Interestingly, the retrospective is only the fourth showing of McChesney’s work in Santa Rosa and the first since 1988.

“The works I’ll be exhibiting are all abstract paintings. My experience is that throughout life an artist is influenced by everything. He has the ability to digest this and get that out onto his picture plane,” says McChesney, one of the progenitors of Bay Area abstract expressionism, which flourished in the 1950s and continues to inform artists today.

“It is my whole experience that I’m working to produce,” he continues. “Of course. you can never reproduce all your experiences–that’s ridiculous– but you see things in these patterns, abstractly, that imply culture of all kinds, and that’s how you do it.”

McChesney’s recent paintings are strewn with evocative natural forms composed in a distinctly Southwestern palette. They appear as organic as they do organized and have been variously described as suggesting micro-slides, intergalactic phenomena, or aerial views of crop circles.

The usual adjectives used to describe active octogenarians don’t apply to McChesney. He isn’t spry, for example–he’s goddamn robust. His conversation is peppered with such anachronistic hipsterisms as “You dig?” and his eyes actively search his surroundings.

Often garbed like some order of beatnik cowboy in a turtleneck, cowboy hat, and full silver beard under which lurks a bolo tie, McChesney is more than an “American painter.” He’s an American original–and it shows in his art.

Among the many occurrences that set McChesney on the path of abstract expressionism was one that took place in the navy. As a merchant marine in World War II, he bided his time between shifts, painting on an easel improvised from his bunk and some plywood and watching the water.

“We’d be tied up outside before going into port and they always had this platform down below, for landing,” he explains. “I’d go down there, and they’d have this light on, and the shapes and forms I saw in the water were just absolutely amazing.

“I was doubtlessly influenced by that,” he adds. “I didn’t copy that, but I used the forms. This went on until the war was over, and by that time I had hundreds of paintings.”

McChesney relishes the opportunity to showcase his work locally. As his wife, artist and author Mary Fuller McChesney, points out, “There really weren’t many opportunities for artists to show work in Sonoma County until recently. Robert has had more retrospectives in Fresno, of all places, than in his own home county.”

THE RETROSPECTIVE groups McChesney’s work chronologically, arranging pieces in their original series collections, from 1946 to 2000. That arrangement helps underline the enduring power of the artist’s work, according to Sandy Thompson, who is curating the show on behalf of City Vision’s Arts and Culture Committee, which previously presented the Christo exhibit at the Kress Building.

“His work is incredibly strong,” says Thompson. “He is one of the original, and probably one of the last, Bay Area expressionist painters. . . . Robert sees in a very unique way, and I think he’s able to translate that consistently and dynamically. You look at his work over 55 years and it stays strong. He has stuck to his vision–he gave no quarter and he gave no compromise.”

McChesney’s creative process is deceptively simple. He lays the work-in-progress flat on the floor and applies various paints with a squeeze-bottle. He then distributes found objects upon the plane that work simultaneously as stencils and antennae for the fortuitous bedlam he later molds into art.

“When this whole thing sets up, I’ve got what I call a ‘chaotic condition,’ and it’s my job to get rid of the chaos and build an abstract composition,” says McChesney. “It’s amazing–the different shapes and forms and how they colorize together and produce this chaos. After it sets up, that’s where the work begins.”