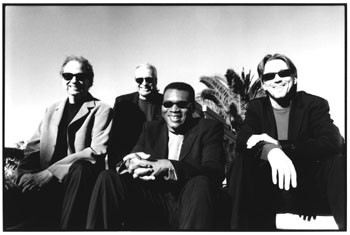 Don’t Fence Me In: The Robert Cray Band may be blues at heart, but they pull from a bit of everything.

Blues purists carp that Robert Cray isn’t bluesy enough, even though the 50-year-old singer, songwriter, and guitarist has garnered five Grammy awards and 11 Grammy nominations in the contemporary blues category; his songs have been covered by the likes of blues giant Albert King; and his sinewy 1986 album Strong Persuader helped prompt an ’80s blues revival.

Now those same critics have something new to complain about: Cray’s recently released album, Time Will Tell, his first since leaving the Mercury label, sports lilting Caribbean soul grooves, electric sitar, Latin funk, and, on two tracks, a string section.

And Cray isn’t offering any apologies.

“I anticipate some people will be surprised by this album, but that’s something we’ve experienced since the very beginning,” says Cray, who brings his red-hot blues band to the Russian River Blues Festival on June 29. “We’ve never done a complete blues album, yet we’ve been tagged a blues band for the longest time by some. . . . Driving around on tour, we’ll listen to anything–Brazilian music, old funk, jazz, rock and roll, organ trios, and everything else under the sun. So the diversity you hear on this record is just us being ourselves. Yes, we still have a footing in R&B, but we enjoy and play a lot of other things.”

Cray credits longtime collaborator and keyboardist Jim Pugh, who has produced blues newcomer Tommy Castro and veteran gospel act the Gospel Hummingbirds, with giving Time Will Tell its distinctive sound. “Here we had this experienced producer in our midst, so I asked him to co-produce the album with me,” says Cray during a phone interview from his Los Angeles home. “That opened the doors to some different musical ideas that I think we needed.”

Those ideas include using the Turtle Island String Quartet on a couple of tracks, adding electric sitar to another, and inviting Latin percussionist Luis Conte and horn players Cynthia Robinson and Jerry Martini of Sly and the Family Stone to contribute.

Employing a string section, especially one as gifted as the Turtle Island, was the realization of a longtime dream for Cray. “I had always wanted to use strings on an album,” he says. “I had heard them over the years on recordings by Bobby ‘Blue’ Bland, back in the day, and always had a soft spot for that.”

Cray has been chasing his dreams since he first picked up the guitar at age 12. During his high school years he performed with bands that played a blend of psychedelia and soul.

One day while sifting through his father’s eclectic record collection, Cray discovered something that would change his life: the blues. “When I was ready, they were there,” the soft-spoken Cray says of the recordings. “One of the first blues records I heard was Howlin’ Wolf’s ‘Smokestack Lightning.’ That’s enough to turn anybody’s head around.”

During the filming of Animal House in 1977, comedic actor and blues fan John Belushi caught Cray in performance at a local Eugene, Ore., club and cast him as the bass player in the fictional R&B band Otis Day and the Knights. That same year, Cray made his first appearance at the San Francisco Blues Festival.

But it was Strong Persuader–filled with soulful vignettes about “lyin’, cheatin’, and stealin’,” and punctuated with Cray’s sparse guitar licks and R&B-tinged vocals–that carried the performer to the Top 10 charts. Since then, Cray has recorded 10 albums.

“Through it all, I’ve listened to a lot of different styles of music over the years,” Cray says, “so when I sit and write a song, who knows what’s gonna come out.

“You can only be true to yourself, and that’s what we’re doing.”