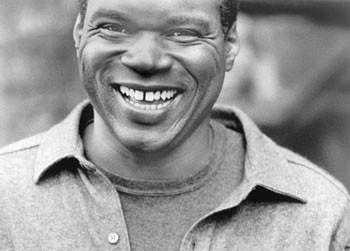 ROBERT CRAY being an artist who has recorded a dozen studio albums and has established a readily identifiable sound that draws liberally from classic Memphis soul and smooth yet punchy blues, it can be tempting to think that one Cray CD sounds pretty much like the rest. That could easily be the first impression with Cray’s new CD, Shoulda Been Home (Ryko). It boasts the familiar trademarks fans have come to expect from the 47-year-old singer-guitarist–such as the wrenching ballads dealing with heartache and wayward lovers, Cray’s silky smooth vocals, the tight, grooving interplay between Cray and his longtime bandmates, keyboardist Jim Pugh, drummer Kevin Hayes, and bassist Karl Sevareid.

Yet Cray–a Novato resident–can point to enough new wrinkles on Shoulda Been Home to make a case that the CD is as notable for its differences as for the traits it shares with the other albums that make up his catalog. “I think when one listens to the current record, you hear a lot of different influences,” Cray says.

And some of those influences are ones that Cray says he feels give the disc a unique identity. For starters, the CD includes covers of two Elmore James blues songs–the rollicking hard-swinging “Cry for Me, Baby” and the gut-bucket ballad “12-Year-Old Boy.” One actually has to go back several Cray albums–to 1995’s Some Rainy Morning –to find him doing this sort of straight-ahead blues.

“That’s what happens for me. The songs weren’t there.”

Shoulda Been Home marks the second straight album in which the Robert Cray Band has worked with producer Steve Jordan. It also was recorded in the same studio–Woodland Studios in Nashville–as Cray’s preceding CD, the 1999 release Take Your Shoes Off. On such early albums as Bad Influence, Cray forged a close partnership with Dennis Walker, who co-wrote with Cray many of the songs and produced each of the group’s albums. But with the 1993 album Shame + a Sin, Cray split with Walker and assumed production duties. Cray says he hasn’t minded giving up some of the control over his albums, even though Jordan is a highly proactive producer who takes a major role in everything from song arrangements to getting precise instrumental sounds for each song. “I’m open to new ideas, especially with somebody whose work I admire,” he explains. “He’s also a great person to get along with.”

The teaming of Jordan and Cray has proven to be a potent combination. The acclaimed Take Your Shoes Off, a CD that explored Cray’s deep roots in the Memphis soul sound of the ’60s and ’70s, earned the Cray Band a Grammy Award for best blues album.

Cray had won Grammys before, but this award had a special meaning to him. “What was really cool was the fact that this particular band won a Grammy,” Cray says, noting that the earlier awards were with a different edition of his band. “With Jim and Kevin coming in ’89 and Karl in ’92, it’s been 10, 11 years, 12 years for somebody being in this band and being nominated a lot, and they finally got to take one home.

“That was really cool.”