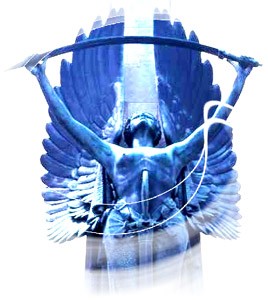 “I CHUCKLE a little because I don’t think of myself as a horror writer,” says Peggy Roth. “I’m not a dark, creeping Goth character. . . . But I like that otherworldly element.”

She’s right. If you were picking faces out of a lineup to find the editor of a literary magazine devoted to horror, Roth wouldn’t be your first choice.

Not every horror aficionado has to sport the creep factor of an Edgar Allan Poe. But Roth, a 34-year-old attorney and mother of two, has a bright smile, an easy laugh, and absolutely no trace of the macabre about her. By day, she works in the Family Support Division of the Sonoma County District Attorney’s Office.

At night, though, Roth pours precious time and energy into publishing Dark Hollow, an annual offering of chilling fiction and poetry from local writers, including a piece or two by Roth herself.

“Being scared is raising a passion, like being excited or falling in love or other things that I enjoy,” Roth says. “It’s stimulating. I think anybody that likes riding on a roller coaster can understand.”

Founded by Roth in 1999, Dark Hollow appears in local bookstores on the first day of every autumn to offer stories, poems, and art about restless corpses, murderous lovers, and haunted taxi cabs.

“I’m looking for well-crafted fiction or poetry that gives people a chill,” Roth explains. “It doesn’t always have to horrify, but it should contain some element that’s spooky–though I have published a number of pieces that just speak to the atmosphere of autumn, that don’t really have a real big chill factor.”

Now in its third year, Dark Hollow is slowly expanding its readership: Roth has doubled circulation to 200. Also growing is the magazine’s pool of contributors, who range in age and experience from a talented sixth-grade student to Sonoma County Poet Laureate Don Emblen.

Indeed, among the best pieces slated to appear in this year’s issue is Emblen’s “Rolling Blackout”: “More absolute than night/ that comes on by degrees,/ this black envelops us,/ our faces, arms, and legs/ as though we’ve dropped into a sack,/ unwanted kittens to be drowned.”

Publishing high-quality writing is Roth’s main goal. “Sonoma County isn’t a really big place, and this is a very particular niche,” she says. “So [the magazine] really has to appeal to people who just want to read quality writing. If I only picked things for their shock value or their horror content, I don’t think I’d get very far.”

Some would-be contributors err in the other direction. Roth wants it known that she does not publish break-up stories.

“I would say the biggest disconnect people have is that they interpret dark as psychologically dark,” Roth says. “So I get a lot of stories about, ‘Oh, I’m so miserable and suicidal because he left me.’ And that doesn’t really qualify for me.”

Roth’s interest in horror dates back to a childhood encounter with The Dracula Book of Great Vampire Stories, a bloodcurdling collection of vampire-themed fiction. Masters of the genre like Poe and Stoker teamed up to work their dark magic on her young mind.

But Roth doesn’t want you to get the wrong idea about her as a kid: “I didn’t sit in the library for hours at a time reading horror books,” she says. “But I read a few that really piqued my interest. And I certainly watched tons and tons of television and movies.”

In college, Roth worked on a literary magazine. Although a published poet, she had never seen any of her horror-themed work in print before she started Dark Hollow shortly after moving here from San Francisco. The task of creating a magazine from scratch turned out to offer a few more challenges than she’d expected.

“It still doesn’t seem like a big deal, but I now know there are a lot of tedious elements to it,” she explains. “When you have the vision, it’s all about the creative side of things. You’re going to get all these writers and sift through all this quality material.

“And then you realize, ‘OK, I have to input the work, and I have to edit it, and then I have to format it, and market it,'” she continues with a laugh. “So I think some of that stuff took me by surprise.”

Roth says she’s in for the long haul. She plans to have a website up in the next few months; she also wants to carefully expand circulation. And she hopes Dark Hollow will find new pockets of readers and writers in love with fear.

“I would love to discover that there are lots of people out there who secretly love horror and being scared,” she says, “because have I got a magazine for them.”