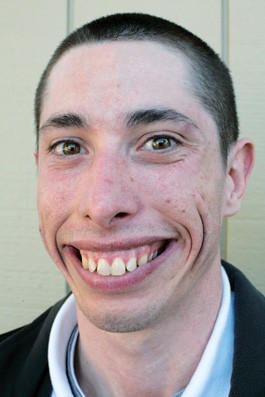 Finding great outsider music is a process of both keeping one’s foot in the pool for unusual ripples and, more importantly, separating novelty from the sincere output of unique individuals. Everybody has at one point sung a joke rap song, but how many have recorded an entire solo album capped with a four-minute death metal track listed as “All of My Rights Were Broken to Pieces and Now I Am Going to Take All My Rights Back from You and Then Your Heart Will Stop Beating”?

Meet Jack Springs, the North Bay’s own Daniel Johnston or Wesley Willis, a completely untrained and unfettered musician carving out his own path.

Wickman looped the track with editing software so it was near the desired time, and the two listened again. The phrase “My rights were violated but they’re not anymore” repeated a total of 24 times. Springs was pleased. It was better than Metallica, he said. He recorded another song. This one had more lyrics.

“These strings are strumming because he’s recording the Jack tracks,” Springs recited, over the same open guitar noise. “Oh Jack, oh Jack, I tried everything in the book but I did not understand ’em, so I came up with a little rhythm of my own and that’s why I call it the blues. And it’s very peaceful for your soul, Jack. And everyone listening to this song, I hope you will enjoy it. It sounds good to me. And when this song hits No. 1, this song is dedicated to James and a role model. And when this song hits No. 1, you will be hearing me real soon. And that is it for the day.”

When Springs returned for more sessions, Wickman had an idea. Googling “death metal mp3s” to find copyright-free samples of garage metal bands, he again stitched a loop, and put Jack in front of the microphone. The ferocious, transformative backing tracks—coupled with a caffeine boost—ignited an expulsion of anger.

“You are face to face with me!” Springs screamed. “You will pay for everything that you have done to me! So don’t give me any lip! And if you do, my nights will haunt you! For the rest of your life! And the wicked life you live will not set you free! And that is it! For the violated nights!”

Springs put 13 of his songs on a CD-R, christened himself Jack Attack, called his album My Rights Have Been Violated and has since been giving copies away to anyone who asks. He’s since become a local cult figure. Word of mouth about his music is brimming underground, he’s often played on community radio, and he’s had one of his songs covered live. One fan even took on the task of printing Jack Attack T-shirts. “It’s just turning into something crazy,” says Wickman.

Repeated themes abound in Springs’ lyrics—his rights being taken away, your heart and how it beats, his taking his rights back from you, the blues, trains, the virus in his head. Springs is 25, works for Old Adobe Developmental Services at G&G Supermarket in Santa Rosa, lives in a group home in Wikiup and has a Pink Floyd tattoo. He met me at Juice Shack after I found him at his work, and confirmed the bare emotion so evident in his music is not a put-on.

“I was born with something called mental retardation, but more high-functional. That’s one of my disorders. And I have ADHD, hyperactive disorder,” Springs says. “So I just took it on paper of how I was treated growing up and the way people treated me, and translated it into feelings, into a masterpiece.”

Springs grew up in Clearlake where he attended a special ed program, where other kids would shove his head in the toilet and flush it, play cruel practical jokes and try to fight him. Once, he was coerced into trying marijuana, got caught, was kicked out of school, and then got beaten up for telling the administration who supplied it.

“It was very horrible,” Springs relates. “People bullied me, teased me, such as society. Instead of keeping that bottled up, I turned a negative into a positive, into music. And letting those things out in a positive way. It was just mainly everyone in the world was treating me like garbage.”

Springs’ catharsis is evident in such Jack Attack songs as “Destruction of All Viruses,” where he growls a venomous warning of reclamation: “Now is the time for you to see my master. He will take your soul away from you now that I have all of my rights back. I will feel no more pain ever again.”

Springs has no regular internet access and no MySpace page, but he does have a girlfriend, Annie, who lives in Sacramento and is supportive of his music. His mother lives there as well, but his dad is “in heaven.” (Springs, who has recently become a Christian, says, “I don’t want to go to hell. It’s not pleasant.”)

Because his songs are musically rudimentary, the honesty in Springs’ voice and passion for his lyrics rises above the music. There is no impulse in his approach to be anything but real. Rarely is music so unaffected ever recorded and heard.

I ask Springs how he’d react if people tried to make fun of his music. “It doesn’t matter to me because I don’t care what they think,” he says. “The important thing is, my music is a masterpiece. The way I put it together is the way I want to put it together.”

Springs regrets that he was once “known as a loser,” but he’s found personal strength since he started recording. He continues to write new songs, and his goals include getting a record deal and playing live. Most importantly, he wants to show the people who mistreated him that he’s made something of his life.

“If my rights weren’t violated, I wouldn’t be down this road,” he says. “I’m glad that they were, because I can let my feelings out in music. Sometimes, when people mistreat you, you can’t keep it bottled up. You have to release the pain.”