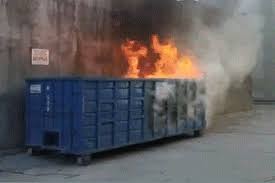 The Trump trade war, charged a garbage-hauling coalition that gathered in American Canyon on Tuesday, “is leaving them with stockpiles of recycled materials, and sending more waste to landfills.”

Last week, China announced new tariffs on recyclable exports from the U.S., in retaliation to Trump’s implementation of taxes on numerous Chinese imports. One new tariff from the Chinese targets fiberboard and cardboard. “It’s a popular export for recycling,” says coalition spokesman Steve Maviglio, “because it’s usually high quality, not spoiled by food or anything. [The Chinese] like it as opposed to mixed paper.”

The new China-slapped tax on cardboard, says Mavilglio, was an unexpected hiccup for a statewide recycling industry that’s already working within tight margins, not to mention having to negotiate ever-more-restrictive conditions set by Chinese importers about the purity of the product they’re getting.

California is the nation’s leader in the recycling business, generally, says Maviglio, and far and away the biggest exporter of recyclables to China. Now recyclers are faced with growing piles of recyclable materials in their facilities, which are increasingly winding up in landfills.

Tuesday’s American Canyon press briefing at Napa Valley Recyclers had two main thrusts: One, to ask residents to recycle smarter in order to stem the flow of China-rejected cardboard into landfills.

The other thrust of the presser was to push California lawmakers, if possible, to step up with new legislation to keep the state and municipalities that have recycling contracts from not having to eat new costs of shipping the product to China. With only a few weeks left in the legislative session, time’s of the essence, says Maviglio for the state to provide relief to impacted haulers and recyclers. “Different companies,” he says, “are getting hit harder than others.” Cal-Recycle hosted a conference a few weeks ago to try and find common ground on the issue, he says.

When municipalities around the state contracted with waste haulers and recycling companies (such as Recology’s recent forays into Santa Rosa and West Marin), to stem the flow of trash to landfills, “tariffs from an unexpected trade war never figured into their plans,” says Maviglio Certainty is the key in this industry, especially when you’re talking about such large quantities being shipped.” Those costs are inevitably passed along to residents and businesses.

As a side-note, while the recycling coalition isn’t talking about landfills’ susceptibility to fires, it would stand to reason that the more cardboard product that winds up at the dump, the greater the risk for fire. As Cal-Recycle notes on its website, “Landfills fires, both surface and subsurface, are more common than one might expect.”