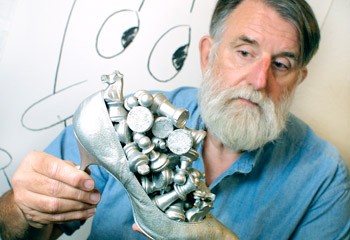 Ray Johnson and May Wilson

Audacious art: SMOVA curator Harley says he wants the Johnson and Wilson exhibit ‘Inside Out: Outside In’ to show ‘that art isn’t this polite little thing that you do all alone in a room.’

Artists Ray Johnson and May Wilson: Taking the cake

FEW ARTISTS better exemplified the notion that art does not belong solely inside the hush of a museum or the funk of a studio than Ray Johnson and May Wilson. Their art might arrive by mail or snake wetly from the processing slot of a public photo booth. Perhaps it was as ephemeral as a phone conversation or as happenstance as an assemblage of old castoffs glued together.

While Wilson let the world come to her, Johnson went out to meet it, though he might never shake a hand. And yet the two found a tenuous connection. They enjoy a posthumous reunion with an exhibit of their work, “Inside Out: Outside In,” opening June 20 at the Sonoma Museum of Visual Art in Santa Rosa.

Ray Johnson was the better-known of the two, a high-art fringe figure who had attended the legendary Black Mountain College with John Cage, Merce Cunningham, Willem De Kooning, and other luminaries from the second half of the 20th century.

Johnson was great friends with Andy Warhol and shared his Pop sensibilities, but he never moved into the spotlight. Instead, he engaged in a subterfuge guerrilla art concerned with chance, distant intimacies, and the postal system. He gathered these obsessions under a virtual umbrella that he called the “New York Correspondence School” in tongue-in-cheek reference to those mail-away courses often advertised inside matchbooks.

Johnson’s correspondence was more job than school, taking him some 12 hours a day to manage from his suburban New York home, a residence legendary for being empty of furniture downstairs, stuffed with paper upstairs, and boasting the biggest mailbox on the block. He mailed his art to friends and strangers alike all over the world, exhorting them to add to the letter, either inside or on the envelope, and return it to him. Because this method of communication was so novel and Johnson so persistent, he built an ever-expanding web of international friendships that presaged a different kind of web than the one we know today. In fact, a harsh irony is that when Johnson killed himself in the second week of 1995 he had little idea what was about to explode all around him.

MARYLAND housewife May Wilson took a real correspondence course in art. That was before her husband announced, when she was 61 years old, that he had plans for the future–and they didn’t include her. Seemingly nonplused, Wilson took a bus to New York and established herself at the infamous Chelsea Hotel. As related in the documentary Woo Who? Wilson was so traditionally sheltered a woman that she didn’t even know how to unplug the bathtub her first night alone.

But she quickly learned and just as quickly bloomed into the fullness of her eccentric personality. She took to frequenting a neighborhood photo booth, cigarette in hand, her long mane of white hair piled up, an inevitably droll look on her face. The resulting photo strips would later be cut and pasted onto reproductions of famous art–Wilson’s face replacing that of Whistler’s mother–on old cards and paintings she’d been given, composing what she called her “Ridiculous Portraits.”

And whereas Johnson sneaked out into the world, surprising people at their mailboxes into unusual friendships, Wilson threw open her doors and beckoned the world to her, asking only that it come bearing piles of junk. And come it did, attending her steady salon of young artists and innovators. From other’s detritus, she built elaborate assemblage sculptures, ordering the chaos randomly offered into witty individual worlds. “It’s a mixed blessing,” she confides in the documentary, “this compulsion to make.” Wilson died in 1986.

The pair met when introduced by Wilson’s son Bill, now executor of Johnson’s estate. Johnson invited May to his numerous “meetings,” art gatherings that sometimes involved stilt walkers He often sent her valuable works by other artists, which she, untutored, promptly transformed into creations of her own. Wilson added postcards and stamps to her repertoire on Johnson’s example. He happily added her to his correspondence school.

THE SMOVA exhibit was curated by Guerneville painter and fellow mail artist Harley, who knew both artists. Indeed, Johnson took to phoning Harley at odd hours to launch his performance monologues. Wilson traded stamps and mail.

“I didn’t like Ray,” Harley says with his usual bluntness. “But what interests me is that he succeeded in spite of himself. I think of him as a cosmic litterer, but he created this whole network. He engineered a huge system that still functions today. Mail art is the granddaddy of the Net.”

Because Wilson rarely exhibited during her lifetime and because Johnson’s work tends to the personal–letters between just two people–the visitor wonders if exhibiting this somewhat private art isn’t doing an odd injustice. “Anything done by a real artist is taken out of context when put in a museum,” Harley reasons. “A Matisse is just a canvas made with paints and brushes. By the time something gets to a museum, it’s already been perverted.

“I want to show,” he continues, “that art isn’t this polite little thing that you do all alone in a room. It’s your whole life. I like how the juice of this show will make it harder to ‘walk around’ the intimacy and the implications of that intimacy. This is an elaborate demonstration of the point that an artist is embedded in society. You [as an artist] are not the icing on the cake–you are the fucking cake.”

Or perhaps as May Wilson herself more gently put it, “Life is people.”

“Inside Out: Outside In–The Correspondence of Ray Johnson and May Wilson” exhibits June 20-Aug. 26 at the Sonoma Museum of Visual Art. The opening reception is on Saturday, June 23, from 4 to 7 p.m. at the Luther Burbank Center, 50 Mark West Springs Road, Santa Rosa. For details, call 707/527-0297.