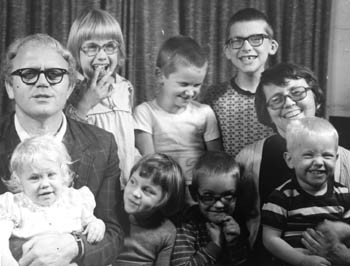 A foodie in suburbia rules the roost

IT’S ALL MOM’S FAULT. That’s the line you’ll get from almost anyone confessing to a less-than-enlightened culinary background. I’ve heard aspiring chefs volunteer this information like politicians dumping their dirt before anyone else can dig it up. “My mother wasn’t a very good cook,” they say, by way of explaining their desperate climb up the food chain to a more sophisticated cuisine.

But almost invariably they leave out the obvious corollary: Where was Dad?

Oy, a Freudian would have a field day with this setup. Absentee dad, meet domineering mom. Symbolic interpretations notwithstanding, it’s true that in most homes mother traditionally assumes the role of baking the daily bread, while dad mans the grill on federal holidays. But I’d like to take advantage of the imminent Father’s Day festivities to say that my dad is a little different.

We knew the truth before we knew the phrase: he’s a foodie. A foodie in suburbia, but that still means something, maybe even more than being surrounded by other foodies and getting support for one’s tastes. I remember one year how we kids saved a mound of nickels and dimes to get him a cheese-and-sausage sampler box from a mail order catalog. The catalog seemed printed just for him. And to this day, he is the easiest father to shop for. No ties or golf clubs or slipcovers for a La-Z-Boy: just get the man some rare cheese and he’ll enjoy it for hours.

We didn’t know it at the time, but such gifts of special food only add fuel to the fire. By the time I was 11 or 12, my father had positioned himself as the savior, the one man who could rescue my mother from her inevitable kitchen mistakes. His approach was horrible, involving a constant barrage of criticism at her while she stood over the stove. The Like Water for Chocolate school of culinary thought would predict that her trampled spirit and continual embarrassment would somehow seep into her meals, and in fact that slight dullness and limpness is the one constant of all her dishes.

It was, in large part, my father’s doing, difficult to forget, let alone forgive, because he still does it. “Honey, honey, honey!” he’d shout from the door to the kitchen. “you’re going to burn those onions! Don’t be lazy about it. You have to keep stirring them, you gotta keep your eyes on them!” But that constant stream of verbal abuse was laced with a critical voice that our dinner table desperately needed, lest we all grew up thinking that burnt onions were normal.

MY FATHER isn’t just an over-the-shoulder cook. He’s also a man of action. He does not hesitate to assert his authority in the kitchen, usually on matters that overlap with his Dutch heritage. Oh, he pretends some familiarity with the all-American pastimes of turkey carving and hamburger grilling, but his best medium has always been boiling and braising, simple techniques that betray his family’s rather recent peasant past. Unless his mother is in the house, he is the seasoner and final judge of every pot of pea soup, and is solely responsible for hutspot, a chunky mash of boiled potatoes, carrots, and onions.

Through generous relatives in Europe and regular visits to a Dutch store three towns over, he kept the family supplied with foodstuffs that we otherwise would never have heard of, things such as German cookies, Gouda cheese, and salt licorice.

Life at our house wasn’t all chocolate sprinkles and pickled herring, though. Dad kept a real old-country table, at which papa got first pick of the food, mama got the scrapings from the pot, and the kids fought over everything in between. (This arrangement got confusing as “the kids” grew up and had children of their own, but he still uses it.) As long as he got his, we could figure out the rest. And usually we did. At a very early age we all had an intuitive grasp of any problems involving fractions and food.

I was a lot older before I understood the significance of my father’s food obsession. He and his family lived in Nazi-occupied Netherlands, which means that most of their diet was potato or cabbage, things that could be begged or gleaned. His mother, my oma (Dutch for grandmother), still takes great pleasure in recalling how she rode 10 miles on a bicycle with no tires–just rims–for a rare couple of eggs.

Dad was very young at the time, maybe 4 or 5 years old, and he doesn’t talk about it often. But occasionally Oma will be over for dinner, and she’ll be talking about the Netherlands and about the Nazis and the bike with no tires and the soup with nothing in it but a rotten onion. My dad, meanwhile, scoops himself out a steaming plate of hutspot. While the rest of the family listens again to the story of his deprived past, he looks at the present abundance, measuring it with his eye, and sneaks another dab from the pot.