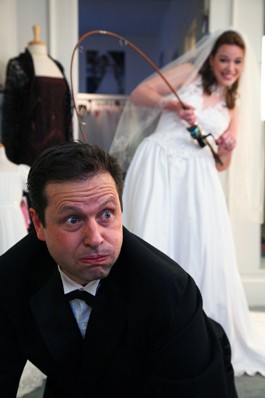 What do you say we skip the first, second and third dates and go straight to the sex?”

So suggests a time-conscious young woman, meeting a man on a blind date in the opening moments of I Love You, You’re Perfect, Now Change, the long-running Off-Broadway confection that just opened a four-week run at Santa Rosa’s Sixth Street Playhouse. In the very funny show-starting bit, the couple (Allison Marcom and Peter Downey), obviously attracted to each other but aware of the many pitfalls of modern romance, keep skipping ahead through their relationship, from first sex to first argument, to their ultimate painful breakup and eventual accidental meeting on the streets (when he’ll have a date and she won’t), where they both realize they were never really right for each other.

“What a great date,” the woman sighs as they both part ways.

If Saturday Night Live was reworked as a musical and had an episode devoted entirely to sketches and songs about love and sex, that episode could be this play, a fairly plotless series of songs (most of them incredibly clever) and sketches (some brilliant, some less so), all tracing homo sapien love from the complicated rituals of dating, sex and commitment on into marriage, parenthood, divorce and old age. The show ran for more than a decade in New York, and is now finally trickling down to the regional, college and community theater level, where it will likely be popular for the next decade.

In the Sixth Street production, under the spirited direction of Nancy Prebilich, with fine musical direction by Chris Alexander, the strong cast of four tackle each new segment with energy, invention and considerable singing chops. Joining Allison Marcom (featured in past Sixth Street productions of Sweet Charity, Bye-Bye Birdie and The Music Man) and Peter Downey (Oklahoma) are two newcomers to this stage, Patrick Barresi and Amie Shapiro. Together, they form a seamless, well-balanced ensemble unit (though the microphone levels could have been better balanced on the night I saw it; it was hard to hear all four performers when they sang together). Backed up with a first-rate musical ensemble, the show is mostly light, confectionery entertainment with a potent strain of seriousness and not-too-subtle heartache running beneath the silly setups and goofball rhymes.

And oh, those rhymes!

As written by Joe DePietro and Jimmy Roberts, the song lyrics are frequently hilarious. In an early bit where two couples endure the endlessly boring first-date chatter of their dinner partners, the line “I can’t believe he’s talking still” is rhymed with “I’m gonna need a scotch refill!” In the second act’s show-stopping country-western number “Always a Bridesmaid, Never a Bride,” where a serial bridesmaid sings about all the horrible dresses she’s collected, the word “satin” ends up paired with “makes me look fat in,” “taffeta” pairs with “laugh at ya,” and “velourish” (is that even a word?) is rhymed with “whorish.”

The rhymes are strong even in the less goofy songs, such as the yearning “I Will Be Loved Tonight,” sung by a young woman who may have just landed a date with the love of her life, which carries the lovely lyric, “So let darkness come, ’cause that will be fine / For I’ll have a soul entangled in mine.”

Of the nonmusical bits, the best are a first-act routine about a poor guy suffering through a date-night, chick-flick movie; a crudely clever sketch about a law firm specializing in suing lovers for not sexually satisfying their partners; and a strong bit in which a recently divorced woman records a dating video, accidentally confessing all the things she probably shouldn’t be. Not all of the comedic bits work so well, and the show has an overlong feel to it, but the slow spots never last long, and the whole thing wraps up in high-spirited fashion with the title song, with its jaunty refrain, “I keep coming back, I keep coming back.”

While I Love You, You’re Perfect, Now Change clearly won’t be everyone’s cup of tea, I wouldn’t be surprised if this entertaining show inspires numbers of people, those all too familiar with the addictive highs and lows of love, to keep coming back for more.