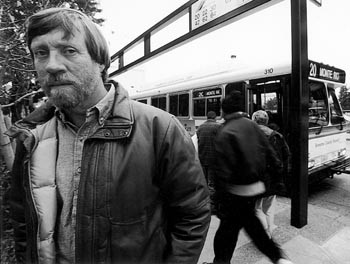 A CONSTANT FLOW of commuters and buses stream in and out of the gray concrete pathway that is the Santa Rosa Transit Mall, which 10,000 bus riders pass through each weekday. Waiting for buses, they pace the sidewalk, buy newspapers from the vending machines, use the pay phones, look over the posted schedules, and settle on the benches.

By March 1998, surveillance video cameras will be watching and recording their every move, raising the spectre that Big Brother will indeed be watching.

The Santa Rosa City Council has approved use of federal funds for a closed-circuit television surveillance system costing $65,402 to monitor the transit mall. The council majority believes the cameras will help curb troublesome behavior at the busy downtown hub. However, the prospect of cold electronic eyes tracking local citizens has caused uneasiness among some observers, especially since police admit the transit mall is not a high crime area.

Councilwoman Noreen Evans, who cast the lone dissenting vote against the upcoming installation, objects to the concept of surveillance cameras in general. “In my mind, you have to have some justification for them,” she says, “but it concerns me that we’d target the transit mall, given the fact that there’s no serious criminal activity there.”

Santa Rosa Police Chief Mike Dunbaugh says the police department is responding to concerns from individuals who have complained they don’t feel safe at the bus station. “We don’t have a serious crime problem in the transit mall, it doesn’t have a higher crime rate, but there is a lingering perception, and our effort is to try to help people feel safe,” explains Dunbaugh, who adds that he doesn’t expect any objections to the cameras. “Most people are very comfortable with an additional presence looking out for them,” he says.

On the other hand, says Dunbaugh, a proposal to also wire Santa Rosa’s downtown Courthouse Square with hi-tech recording devices recently fell by the wayside. “Courthouse Square is different,” he says. “It’s symbolically the heart [of the city]. We received feedback that people are concerned about cameras focusing on that area.”

But, the Sonoma County Chapter of American Civil Liberties Union maintains that surveillance cameras shouldn’t be used to spy on the public anywhere in downtown Santa Rosa. “It’s a bad sign–this technology is very distressing,” says ACLU Sonoma County Chapter board member Wayne Gibb, who heads the Privacy, Not Surveillance Committee. The committee recently mailed letters to ACLU members–who have fought similar devices at Helen Putnam Plaza in Petaluma–urging them to voice their objections about the transit-mall cameras.

“People should not have their comings and goings monitored and tape-recorded by the police because they cannot afford a car or choose to conserve our natural resources by using mass transit,” states the ACLU letter. “Video recording of people is very different than using police officers on the beat to prevent crime. It is the antithesis of the community policing model. Santa Rosa is implementing it to make the community feel closer to police to help prevent and stop crime.

“This monitoring of citizens with cameras makes us feel that we live in a police state, alienates us from the police, and changes the very nature of our society.”

The ACLU contends that experiments with surveillance cameras have proved unsuccessful in other cities–such as New York City; White Plains, N.Y.; Newark, N.J.; and Miami Beach–because they did little to reduce crime overall, seeming instead to have merely displaced crime to other areas.

In September, the Oakland Police Department decided against a plan to place video surveillance cameras around the city, citing the cost and concerns about civil liberties. “The main argument for not installing the cameras was the public’s perception of Big Brother watching over them,” explains Oakland Police Capt. Pete Dunbar, “and we didn’t want to tear apart our relationship with the community.”

Yet Baltimore officials regard their system, which has been operating since January 1996, as a success. Frank Russo, a retired police commander and the public safety director for the Downtown Partnership of Baltimore, the merchant association that spearheaded the surveillance project, credits the cameras for an 11 percent drop in crime in the area during the first year of operation.

But ACLU police practices expert John Crew says Big Brother has become Big Business. “It’s a huge industry, and a new market in the United States,” he says. “Security companies are pushing this equipment onto communities like Santa Rosa.”

Laurie Hill, acting deputy of transit for Santa Rosa, says the transit-mall surveillance system will use four cameras, designed to focus on the alcove areas and to pan the full length of the mall. The cameras will be mounted high and not concealed, although, Hill adds, it will be impossible to see unless it is pointed at you.

The two fixed and two moving cameras use sophisticated fiber-optics cable and will be able to capture images from four cameras on one tape. The cameras will have recording and zoom-in capabilities. “We’re hoping to monitor negative behavior and bus traffic,” explains Hill, adding that most petty crime at the transit mall consists of “nuisance behavior” such as foul language, spitting, or boisterousness. The transit mall will keep its team of three security personnel.

There will be a viewing station at the police department’s communications section, where dispatchers will watch the action on a screen. Dunbaugh says the police don’t plan on keeping tapes longer than 24 hours.

Officials have not decided whether there will be warning signs at the transit mall to alert individuals that their actions are being filmed and recorded, though without signs it seems unlikely that the cameras will act as the deterrent that police say they are intended to be.

SURVEILLANCE of community members is a growing trend. There has been an on-again/off-again plan by Starbucks coffee company to install video surveillance cameras next to Putnam Plaza in Petaluma to tape people using the public park, and to then hand the tapes over to the police. The idea is still being contemplated.

Last month, Santa Rosa police mounted cameras, which resemble birdhouses, at the intersections of Steele Lane and Mendocino Avenue, and Dutton Avenue and West Third Street, to catch red-light runners. After a month’s grace period–in which 98 people were given warnings–police began issuing citations. Fines for signal jumping are $104, but next month a new law aimed at reducing injury accidents will raise fines to $270. The cameras are triggered by sensors in the pavement, and they shoot two photographs that aim to capture both the driver’s face and the vehicle license tag. If the traffic-snapping idea is successful, the camera program is likely to be expanded, says Dunbaugh.

Councilwoman Evans says she’s surprised there hasn’t been more of a public outcry about the Orwellian introduction of surveillance systems in Santa Rosa, particularly the cameras at the transit mall, where she says commuters will be “assumed guilty until proven innocent.”

She says, “Things happen in subtle ways. Big Brother isn’t going to one day appear with trumpets blaring and flags waving–it will come insidiously. There will be one camera, and the next time it will easier to install another. You begin to open doors by taking this first step.”