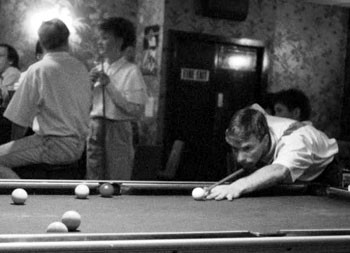 Questioning your drinking? Drink your questions.

Pop quiz: What is the capital of Bolivia? The highest mountain in France? Which Penn Station track does the Chattanooga Choo Choo leave from? Think you can answer those? Now order a plate of pub fare, have a pint of ale, and go for another round. Of questions. Pints, too. If you’re the type that shouts out answers at popular TV quiz shows but find the cathode-ray tube’s contestants frustratingly unresponsive to your intellectual superiority, pub trivia may be able to help.

Pub trivia is a curious phenomenon on the surface. At the same time you’re utilizing your cerebral powerhouse to recall, say, King Lear’s daughters’ names, you’re soaking said powerhouse in draft beer and pitting it in a battle over its oxygen-rich fuel with an ornery belly full of greasy food. Not a little bravado is the key.

Pub trivia games, long popular in the United Kingdom and Ireland, have recently gained converts in this country. Brainstormers, a kind of franchised trivia outfit founded by a Bay Area Irish transplant, runs several quizzes in the Bay Area, including one at the Rose Pub in Santa Rosa. It works like this: a trivia “quizmaster” collects a few bucks from each contestant, arranged in teams, and puts it in the pot. No millionaires are made. It’s more like, who wants to split up $60 among three to six people. Depending on the fineness of your team’s minds–and the greatness of their thirst–you can do better than break even. Helpful tip: Don’t bet the tab on it, brainiac.

A few years ago I shared victories and defeats as part of a regular team. Some friends had been talking about going back to pub trivia. When we finally separated the talkers from the walkers, we had three walkers on a recent Tuesday night to the Rose Pub. We named our skeleton crew the Crain-i-cats, which I came to regret for its subtle yet still overly optimistic reference to our abilities.

Quizmaster Patrick McCool (I don’t think you have to be Irish to assume the mantle of quizmaster, but it may help) laid out the game plan. There would be seven rounds, 10 questions each, including general knowledge, a name-the-tune music round, a mystery picture round, and what he called a “drug round.” Now, here’s a perfect example of a productive application of the knowledge gained from feverish, long hours of study in college days.

The Crain-i-cats are looking good at first. Which 1930s gangster was distinguished by a scar? Of course, the answer to all gangster questions is Al Capone. The answer to all sports questions, by the way, is Babe Ruth. The name of the dude that escaped the den of lions in the Bible? I discover that my team is all agnostic, so I think back to lessons gleaned from evangelical comic books. Got it. So far, we’re acing it.

After each round, the quizmaster manically tallies the scores while the teams huddle on their answers. This breaks down into lively discussions at some tables, shrugs and blank looks at others. Debates are heated, drinks are spilled. Periodic laughter erupts as wits from each group get to the question: The guillotine was originally developed to chop off which part of the body?

Meanwhile, we are handed round two on a worksheet, instructing us to match real and fictional captains with their description. Turns out we don’t know our Captain Kidd from our Captains Hook and Cook.

It’s during the break that some face the temptation to make that call to a friend–which they are not allowed. It used to be easy to spot them sneaking to the phone booth by the bathrooms. With phones in nearly every purse and pocket, the scrutiny must be intense. Our waitress confirms that allegations of cheating can cause a general disturbance. “You think it’s just all for fun,” she says, “well some people take it sooo seriously.” She confides that she was even caught in the fray for allegedly tipping off a team. “Oh, I knew that they already knew it anyway.”

Sometimes the quizmaster breaks the routine for a free-for-all instant prize question–one that anyone who happens to be in the bar can answer. What’s the name for a positive electrode? It’s not an ion, neutron, cathode, or catheter. People will shout out anything to see what sticks.

When the tallies are read, we’re already slipping. Fortunately, you are allowed the anonymity of a team name, often something fanciful like Jehovah’s Witness Protection Program–the arch nemesis of my latter-day team–or the factual Two Guys and Their Mom. The Three and a Half Kittens of the Apocalypse told me they changed their name every week. So if you don’t groan with disappointment too loud and too often, nobody has to know your team is featherweight.

The impetus to original pub trivia games, according to Brainstormers, was early television game shows. The local pub was likely to have the only TV in the neighborhood, and patrons turned their tube-directed shouted answers and challenges of “Why don’t you go on that show?” into home-grown entertainment. For the pubs, the economics are sound: trivia nights fill the house on normally slow Monday to Thursday nights with beer swilling, chip-chowing know-it-alls. Brainstormers even sells trivia kits on their website. For a range of prices, you can order quiz packs and become licensed as your own quizmaster.

Lest you think your team will languish unless you round up a sampling of doctoral candidates, here’s the real trick to the game: Watch too much television. Example: What is 75 percent saltpeter, 10 percent sulfur, and 15 percent charcoal? I turned excitedly to my teammate: Remember that Star Trek episode where an unseen highly evolved alien race makes Captain Kirk battle the lizard leader and they’re on a desert planet and it happens to have saltpeter, sulfur, and charcoal lying around and Kirk makes . . . gunpowder? Yeah, yeah, that’s it!

It’s also wise to keep informed on current events. There’s often some kind of topical angle, from the latest political scandal to the nearest holiday (last December it would have helped to have known the name of Santa’s ninth reindeer and which organization menaces the world each holiday season with the motto “Blood and Fire”).

We got fried on the drug round. The twist was that you had to name the symptom that a brand-name prescription drug is supposed to treat. Hesparin. Dilantin. Diravin. A more experiential approach to pharmacology was of no help. We guessed wildly. Our waitress came back with a fresh pint of Guinness and assuaged our feelings of ignorance. “That team over there?” she gestured to the smug seven maintaining the lead. “They have two pharmacists.”

By the time of the “Death in the ’90s” round (questions that don’t shy from the morbid), we had just about crashed and burned, and the mystery picture round cemented our failure. I recognized Nikita Krushchev.

After we mistook Hendrix for Joplin during the music round (it was a part without vocals, give me a break!) and I couldn’t pick out Elvis Costello from the thicket of pop vaguely familiar as the stuff that I hear from other people’s cars, it was all downhill. We had 34 points out of 51.

Round seven. I’m pushing a pitiless plate of battered and fried objects out of my sight while the quizmaster asks, “What is the common term for myocardial infarction?” We’re trailing by a generous margin, but our stubborn will keeps us going, if only because it would be a damn shame to lose our second to last place to some other ignorant jerks. A history question is next. Which war introduced trench warfare, barbed wire, and a crude flamethrower? Finally, my command of historical facts comes into play. It’s a trick question. World War I–that’s the chump answer. It has to be the Russo-Japanese war of 1905. Ha, nobody knows that! Think I was wrong? You must have watched The Blue and the Gray.