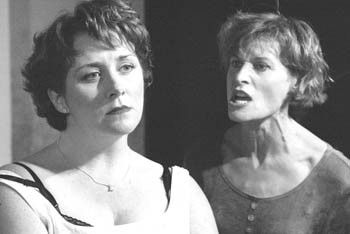 No socks equals no sex in ‘Psychopathia Sexualis’

It sounds like the title of a textbook about sexual derangement, the sort of lurid tome that would devote whole chapters to Jack the Ripper, the Marquis de Sade, Bill Clinton, etc. But the faint of heart or queasy of stomach have nothing to fear. Psychopathia Sexualis, now onstage at Actors Theatre in a production directed by David Lear, is actually a rather sweet-natured romantic comedy from John Patrick Shanley, the author of Moonstruck.

Unfortunately, these fetish objects have been seized by Arthur’s frustrated psychiatrist, the formidable Dr. Block (Steve Howes), a strict Freudian who turned to radical action after six years of therapy failed to cure his patient. Block’s timing couldn’t be worse, since Arthur is about to marry Lucille (Mary Gannon), a fire-breathing Texan who sees John Wayne as the ideal male and is unlikely to have much patience for her sweetheart’s very special need.

Desperate to retrieve the socks in time for his wedding night, Arthur turns to his buddy Howard (Bill Waxman), a pompous stockbroker turned navel gazer, and begs him to go in search of his missing kinks. But Howard turns out to have more than a few unresolved issues of his own, and his first confrontation with Dr. Block turns extremely ugly when the good doctor diagnoses him as a “complete power devil” and “a giant bleeding ego” wandering in a void of his own creation.

This AT production sports a remarkably strong cast. The towering Howes plays the most intimidating psychiatrist since Hannibal Lecter, Waxman is good as the blowhard who gets his comeuppance, and Reynolds brings good comic timing and a nice pair of puppy-dog eyes to his sock-obsessed character.

But the most obvious highlight is Gannon, who slides seamlessly into the role of her brassy cowgirl (described by another character as “a hillbilly Aztec Evita”). Gannon has her accent down cold, putting the whole Lone Star State into her “thank yews,” and she achieves a compelling mixture of toughness, sensuality, and emotional vulnerability. She’s especially good in her girl-talk scenes with Howard’s wife, Ellie, played by Cynthia Abrams, who deftly maintains an icy socialite’s sophistication in the face of Lucille’s flamethrower roar. As the two friends discuss the inevitable disappointments offered by the opposite sex, they deliver what may be the funniest and most compelling moments in the play.

You could define a crowd pleaser as any show where an actor has to pull up his or her pants for the bow at the curtain call, and indeed, there are large stretches of Psychopathia Sexualis that strongly resemble the screwball comedies of old, albeit with a tad more sexual frankness. But the slapstick, double takes, and broadly drawn characters coexist quite comfortably with a serious exploration of the ambiguous nature of friendship and romantic relationships. The result is a play that’s intellectually and emotionally satisfying, as well as pretty damn funny.