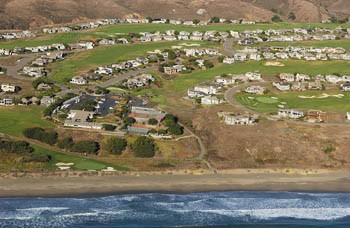 “How would Ken Adelman feel about someone hovering in a helicopter over his home taking pictures?” says Santa Rosa resident Jeanette McFall. “That man is a peeping Tom!”

McFall is one of many people concerned about the California Coastal Records Project, an ambitious undertaking by retired techie Ken Adelman to post detailed photos of the California coastline on the Internet.

For the past year, 39-year-old Adelman and his wife, Gabrielle, have flown their helicopter up and down the coast taking pictures with a digital camera. Now, over 12,000 pictures can be accessed on the project’s website (www.californiacoastline.org).

The pictures cover every inch of the coastline except for an Air Force base near Santa Barbara, which Adelman is waiting for permission to photograph. Since the pictures were taken from only 500 feet, details such as plants, cars, and figures can be seen, as well as private property and homes.

But Adelman’s intention isn’t to invade anyone’s privacy. His goal is environmental. By preserving a record of the coast, he is providing a wealth of “before” pictures to be used in land-use arguments and as evidence against environmental violations.

In 1997 Adelman took aerial photographs of an 18-mile stretch of coastline the Hearst Corporation wanted to use for a golf course. Mark Massara, director of the Sierra Club’s Coastal Program, used the photos in a campaign against the golf course. The California Coastal Commission eventually denied Hearst’s plans.

The success the photography played in stopping that project and the need in subsequent disputes for “before” photos led to the idea of photographing the entire coastline.

“The ‘spy in the sky’ project will give ammunition to the commission’s bureaucratic laws,” says Harold Bloom, attorney for Sacramento-based Pacific Legal Foundation. “What kind of damage does backyard landscaping or the size of a house do to the environment? Those are the kinds of things the commission goes after.”

But the photographs show much more serious environmental violations, according to Massara, including beach access, illegal seawalls, spills, and bulldozing on the beach. He forwards violations to the Coastal Commission, which is slowly following up.

“It’s an overwhelming task,” he says, “but we will get to every one of those violations.”

There is nothing illegal about the photos; the law generally allows pictures taken from public places to be published without permission. Yet many still feel that the project is too intrusive.

McFall knows that her home is not in Adelman’s camera sights (she doesn’t live on the coast), but she feels the photos violate coastal homeowners’ privacy.

Adelman doesn’t have much sympathy for people living on the coast who don’t want their homes photographed.

“People move to the coast because it’s beautiful, but they don’t want anyone else to have its beauty,” he says. “I’ve heard it likened to a beautiful woman wearing revealing clothing and then complaining when men stare at them.”