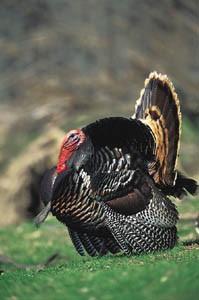 Click here to buy ‘The Complete Vegan Cookbook’ at Amazon.com

Several years ago, Hope Fauna (her name means “hope for the animals”) visited the Farm Sanctuary in Orland, Calif. While there, a refugee from a factory farm befriended her. “I was at the hen house and a tom turkey looked me in the eye and crawled in my lap,” she says. “We sat there for quite a while. It was a great little connection.”

Fauna belongs to Sonoma People for Animal Rights. Between now and Thanksgiving, you’ll find SPAR at Whole Foods markets, distributing brochures that reveal everything you never wanted to know about turkeys. To wit: the vast majority of commercially grown turkeys slaughtered in the United States are crowded by the thousands into filthy factory farms; each bird has less than three feet of space; the turkeys’ beaks are cut off; and disease is rampant.

Not surprisingly, every year millions of Americans become ill, and some die, after eating flesh laced with salmonella, campylobacter, and other bacteria.

Local, free-range turkey farms have managed to install some more humane practices, though there is still truth to the brochures. Beagle Brodsky, manager of Willie Bird Turkeys in Sonoma County, says, “We cut off the top part of the turkeys’ beaks when they’re four weeks old. When you’re in the turkey business for 40 years, you protect your crop. If you don’t trim their beaks, they’ll peck each other to death.”

Brodsky says that Willie Bird turkeys are free-range, and have plenty of room. But facilities are closed to visitors. “There’s too much disease among turkeys,” says Brodsky. “People might track diseases in on their shoes.”

Diestel Turkey Ranch in Sonora County, whose turkeys are carried by Whole Foods Markets, follows some of the same practices. Defending beak trimming, owner Tim Diestel says that the beaks grow back, but without the lethal hook at the end. He also says it doesn’t hurt. Santa Rosa animal rights attorney Larry Weiss disagrees, however, and notes that “the California Penal Code specifically exempts animals killed for food from protection under cruelty laws.”

Dan Neurberg, Whole Foods’ meat coordinator, has visited Diestel Turkey Ranch many times. He says, “Chicks [have] plenty of room to roam around freely and get good ventilation and sunlight. When it’s cold, heaters keep them warm. They have water and feed any time they want. At three weeks old, they’re free to roam outside in fenced acreage. The ranch is very clean and free of any smell at all times.

“If I were a turkey (some think I am), I would love to be there. It is such a great place, and the scenery is outrageous.”

Most studies have shown that turkeys don’t pay too much attention to scenery, but the other factors that Neurberg mentions constitute humane treatment. Wild turkeys live as long as 20 years. Domestic turkeys are bred to grow faster and weigh more than their wild cousins; birds with unnaturally large breasts are particularly appealing to consumers. These and other factors shorten the birds’ lives to a maximum of two years.

Diestel slaughters turkeys at six months, and Neurberg says the process is humane. “The turkeys are all hand-loaded. They are put upside down to help calm them. They are stunned first, and then they are killed by hand to insure they all died before going on.”

Judith Iam, a Sebastopol resident and a conflicted omnivore-vegan, says, “I’m reminded of a Monty Python book with an image of the inside of a fancy box of truffles, each space describing the corresponding confection, with one reading something like, ‘Lightly killed frog, delicately dipped in semisweet chocolate.'”

Chocolates aside, if you have your heart set on a plump, juicy turkey this year–with the certainty that it was humanely treated before it reached your plate–you may be out of luck. Of course, you could go out and shoot a wild turkey. Then again, it’s apt to be skinny and tough.

Hope Fauna has another idea. On behalf of her friend Tom Turkey, she says, “In my ideal world, the centerpiece of Thanksgiving would be a stuffed pumpkin.”

Sonoma People for Animal Rights will hold a candlelight vigil for turkeys on Nov. 23 at 4pm at Courthouse Square in Santa Rosa (near Santa Rosa Avenue and Fourth Street). Polarica (www.polarica.com) supplies free-range and wild turkeys.