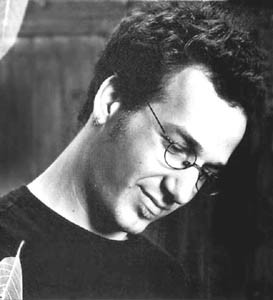 Ask Scott Amendola to describe his latest music project, Crater, and the avant-jazz percussionist waxes existential. “Crater is about entering the unknown abyss of improv without the headlights on,” he explains. “The music hits on groove and noise, beauty, tension, love, anger, rage, kindness, chaos, motion, stop motion. No one knows what’s going to happen. No one knows what lies beneath. Beneath might be above. Light might be dark, wet might be dry. Fall in.”

In other words, Crater opens a world of possibilities.

Over the past decade, the New Jersey-born Amendola, a Berklee College of Music alum known for his brilliant funk and jazz grooves, has built a reputation for adventurousness. Shortly after moving to San Francisco, he hooked up with eight-string jazz guitar phenom Charlie Hunter, recording several Blue Note albums with Hunter’s band. He also recorded and performed with T. J. Kirk, the freewheeling funk-based band that featured Hunter, John Schott, and Will Bernard.

But Crater, Amendola points out, “is my bambino.

“What’s different about Crater is that it’s total improv,” he continues. “I’ve been in situations that are completely improvised, but this is the first I’ve started.”

North Bay audiences will get their first glimpse of Crater when the band perform this week at Zebulon’s Lounge in Petaluma.

The band features a rotating lineup, though Amendola, Sickafoose, and electronic music wiz Jhno (who provides loops and ambiance) are a constant presence. Nels Cline gets first call to fill the guitar spot.

For the Zebulon show, guitarist Jeff Parker is coming out from Chicago. Parker is a member of Tortoise, isotope217, Chicago Underground Quartet, and what Amendola describes as other Chicago music-making tribes.

“Crater was born out of my love of groove, sonic soundscapes, and improvising,” he explains. “Jhno is an electronic musician with whom I’ve worked with a bit in the past in more composed situations. I thought that it would be great to play with him in a completely improvised setting, especially since he is a great improviser. Jhno comes from a jazz piano background, and practically gets inside his computer to manipulate and rebuild its brain, day-in and night-out.

“These musicians work so well together because they listen and make shit happen,” Amendola adds. “They’re not afraid to step out, or not play at all. This is egoless music-making, full of personality.”

Further adventures in clubland: the Dallas-based alt-country band the Old 97’s rose to prominence in the mid ’90s with a rockin’ blend of West Texas twang-a-billy and Tex-Mex beats, but frontman Rhett Miller had other ambitions. This year, Miller released his solo debut, The Instigator (Elektra), a recent collection of decidedly pop-flavored original songs produced by Jon Brion (whose credits include albums by Fiona Apple, Macy Gray, and Aimee Mann).

Once you get past the missing Americana sensibilities, the songs on The Instigator grow on you. And you get a guest appearance by Robyn Hitchcock as a bonus. Miller swings through the North Bay this week when he plays Saturday, Dec. 7, at 9pm at the Mystic Theatre, 21 Petaluma Blvd. N., Petaluma. The Bay Area’s own irreverent country mavens the Mother Truckers open the show (get there early). Tickets are $12. 707.765.2121.

Elsewhere, look for ’60s folk and rock icon Country Joe McDonald, who’s sure to have a topical thing or two to say about the state of the nation when he performs an intimate dinner show on Saturday, Dec. 7, at the Blue Heron Restaurant and Tavern in Duncans Mills. Folk-blues great Geoff Muldaur returns on Sunday, Dec. 8 to the Rancho Nicasio, and Michael Ray’s Cosmic Krew bring their New Orleans funk to 19 Broadway in Fairfax on Dec. 20. On Dec. 23, the Christmas Jug Band return to the Sweetwater Saloon in Mill Valley for their annual yuletide performance, an endearing mix of traditional and irreverent original songs.