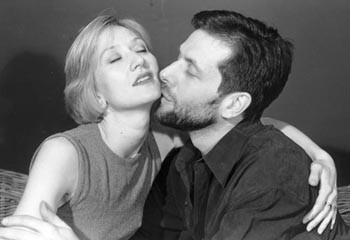 Nebbish actor Matthew (Peter Downey) suspects his mercurial actress wife, Lisa (Danielle Cain), is having an affair with their British director, Adrian (Steven Abbott). To complicate matters, the three are in the midst of rehearsing a play penned by Adrian depicting an affair not dissimilar to the one possibly at hand.

Dietz’s work is a play within a play to the nth degree. Its dramatic pauses are more pregnant than a Russian nesting doll. Imagine Borges with gags. Fantastic leaps of theatrical logic abound, and nary a scene passes without some order of revelation spawning yet another meta-reality. Here, the space-time continuum is compressed into either a seamless Möbius strip or an entangled Gordian knot, depending on one’s attitude.

Director Delzell excels, however, at navigating Dietz’s labyrinthine turns and succeeds at staging an evocative and challenging work that’s hilarious to boot.

Downey is superb as the suspicious husband who can no longer discern if his convictions are real, rehearsed, or simply idle patter to pass the time on the therapist’s couch. Cain, too, turns in a compelling portrayal as his wayward wife with a high-energy performance that is devilishly crisp.

Likewise, Abbott does a fine turn as Adrian, the starchy auteur gone adulterer, delivering a number of the show’s best lines, including “Honesty shouldn’t be an afterthought, it should be a last resort.”

Poe does well with her portrayal of the sober shrink and is a welcome ballast to the general insanity that begins to cloud the plot. But it’s Bartels’ scene-stealing sleuth Cory who accounts for much of the play’s laugh-out-loud moments. Replete with an impenetrable poker-faced air and Lauren Bacall-esque purr, Bartels lays it on deliciously thick with her sledgehammer delivery of lines like “I prefer dick” when discussing her professional title or when she downs a stolen single-serve bottle of airplane brandy in one sultry swig.

Ron Bartels’ set design, composed of slanted walls adorned in mahogany wainscoting, is reminiscent of an M.C. Escher print–the perfect model for this production. Astute listeners will note that sound designer Amy Curley culls her soundtrack from a laundry list of detective flicks.

Less of a whodunit and more of a “who’s-doing-who?,” Actor’s Theatre’s production of Private Eyes is both a delightful, highbrow romp through a dressing-room looking glass and an entertaining evening of theater.