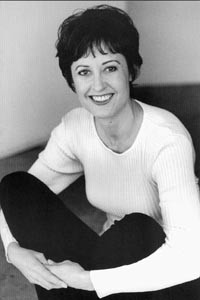 FUNNYWOMAN Sue Murphy is ticked. She’s waging her own personal battle with cyberspace–and so far the Web is winning. Case in point: Just try looking up this stand-up celebrity and television comedian (she just appeared on Late Night with David Letterman) on an Internet search engine and what do you get?

Sure, there are scads of websites–but most are related to Sue Murphy, a real estate agent in New England. Other sites refer to another female comic named Sue Costello who played the TV role of a waitress/stand-up comedian named (what else?) “Sue Murphy” in the short-lived sitcom Costello.

It’s all rather confusing.

Finally, there are the sites about our Sue Murphy, the observational comic who grew up in Menlo Park in the South Bay and now lives in Los Angeles. But Murphy laments these are filled with none-too-useful snippets of misinformation and ancient jokes.

The quip that crops up most online goes: “You know when you walk into a room and can’t remember what you walked in for? Do you realize this is how dogs spend their lives?”

Murphy doesn’t care to have it repeated to her. “That’s so old,” she groans over the telephone. “It’s the oldest joke I’ve ever written, and for some reason that keeps getting quoted. You know how the Internet just has a tendency to repeat itself and things get cycled through and cycled through and become extremely irrelevant? It’s very interesting to me.”

Murphy, 40-ish and single, with a kicky short haircut and large, expressive eyes, is talking from her Los Angeles pad. Lauryn Hill croons in the background while Murphy chats and fiddles with her computer.

This is just a short break in the popular comedian’s hectic schedule. The following day she will head to Sacramento for stand-up gig at Punchline. Then, on Friday, Jan. 28, Murphy hosts the “Battle of the Comedy Titans”–a comedy show at the Luther Burbank Center–which will feature past San Francisco Comedy Competition winners Vinnie Favorito and Don Friesen.

Murphy, a former actor, never intended to be a comic herself. She transitioned into stand-up via the world of theater. During the golden years of San Francisco comedy, she worked as a team with Dan St. Paul, whom she met when both acted in a play.

In 1989, when Murphy had just started branching out in stand-up solo, she placed sixth in the fabled San Francisco Comedy Competition, which has helped launch several heavy-hitting comedic careers, including those of Marsha Warfield and Robin Williams.

Murphy’s live shows are now in high demand. She has also appeared in a multitude of stand-up comedy shows and sitcoms on TV, and currently has her own half-hour special airing on Comedy Central. In addition, she’s a regular on the Tonight Show and is the voice of the wisecracking Latara in the ABC Saturday morning cartoon Ewoks.

Murphy says she cannot describe her comedic style. “I just be myself, like any good comedian. I believe you have to be true to yourself,” she says.

So where does she get the inspiration for her act? “I probably will talk about this [interview],” she says with a sudden, explosive chuckle. “Actually I’m inspired by everything–anything that happens. I can be getting my gift with purchase at the Clinique counter. I have about 10 minutes on Cinnabons right now because of a particular event at the Cinnabon stand in Chicago O’Hare Airport.”

Like fellow female comedian Paula Poundstone, Murphy does not think of herself in terms of being a woman comic. “If you’re funny, you’re funny,” she explains. “Obviously, I’m female and I have a certain point of view that must be affected by that in some degree. I agree with Paula completely in that I think she and I are similar in the way that we don’t necessarily only talk about our experiences from a female point of view–it’s just about living your life.”

Right this second, Murphy is living her life by pounding on the computer and announcing her latest project in the battle with cyberspace–the creation of her own website. “It’s not going to be a fancy website but just a vehicle for getting the right information over,” she says. There’s nothing that makes me more angry than misinformation.”

DESPITE her complaints about cyberspace, Murphy can’t be all that mad at technology since she offers to e-mail over a few new jokes, which appear almost instantly: “Las Vegas is promoting itself as a family vacation spot. Because you know what kids like . . . hookers and pawn shops,” says one.

“How did I end up owning so much crap? I know at one point on my life I owned a futon and a bong and I was happy,” says another.

This second quip must kind of ring true for Murphy, who describes herself as “an organizational fool.”

“You have to be when you’re living in a million different places at one time. I’m feeling a little overwhelmed because as I look around I realize I’ve got a lot to organize,” she sighs. “The last three weeks have just been so enormously busy–my house has turned into my purse.”

Still, Murphy thrives on all the activity. “What’s great about doing stand-up is that it’s always an ongoing, growing, changing, interesting thing and always current for me,” she explains. “It’s always about where you are now, and for me, what I did five years ago is so irrelevant to what I’m doing now, so it’s always changing and always interesting.”

The sound of computer keys are evident once again as Murphy muses about her future website, which is currently under construction. “I can’t use ‘suemurphy.com’ because of the woman who’s a real estate agent in New England–and I don’t think she’s going to sell me her address,” she says.

“But my site is coming to a computer near you soon,” she adds excitedly.

Suddenly Murphy checks the time and has to go. Meet people. Write material. Design a website. Get organized.

Any final comedic comments to leave us with? “Actually, I’m not a comedian–I’m a real estate agent in New England,” she deadpans. “I just like to fly into Santa Rosa and fake comedy in between four-bedroom-two-bath sales. . . . It’s a shoddy ruse, but I’m trying to pull it off.”