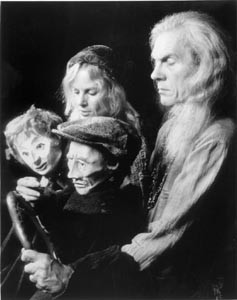 LADIES AND GENTLEMEN, a dynamic duo of thespians has descended upon local stages–award-winning theater veterans Conrad Bishop and Elizabeth Fuller are making a new home in Sebastopol. As a respite from a national tour, the lifelong collaborators are bringing Mating Cries, their suite of six original micro-plays exploring the slings and eros of amour, to their new home for a single weekend.

Judging from a mid-January performance in San Francisco, Mating Cries is a splendid brew of art and love, delivering a hearty serving of wit, insight, and stagecraft sure to arouse even the most curmudgeonly paramour.

From the get-go, Bishop and Fuller’s sparkling onstage chemistry is awesomely apparent–imagine an Elaine May and Mike Nichols for the west county set. Opening the production is the charming playlet “Dreamers,” in which the couple trade punchy epigrams about love, loaded with such suggestive gems as Fuller’s line “I want a bouquet of lovers–but they wilt.”

Later, “The Dreamers” finds Bishop and Fuller parsing the personal ads of a mismatched couple, whose sheer loneliness hastens compromise of their ideals. Though this is well-trodden territory for parody, Bishop and Fuller offer new and satisfying gags and provide insight into how far a heart will bend before it breaks.

The weak link in Bishop and Fuller’s otherwise brawny theatrical chain is their first-act closer, “Freeway,” which gets caught on the rough shoulder of an overwrought “highway-of-life” metaphor. It’s the tale of garrulous newlyweds represented by grotesque puppets who ride through a series of pap platitudes until, mercifully, they wreck and die.

The equally satisfying “Transcripts” finds a pair of typists in the midst of their labors while Fuller’s lovesick character realizes her internal musings about her colleague are somehow bleeding into their shoptalk.

Bishop and Fuller are versatile performers, but they’re also crackerjack playwrights, as indicated by their deft retelling of the Greek myth of “Baucis and Philemon.” The story–in which an aged couple show hospitality to a couple of gods disguised as mortals who reward them by turning them into intertwining trees–is a bittersweet exploration of lifelong love.

The production values in Mating Cries are a study in economy–the sets and props are minimal, the music is spare, and the costumes are merely suggestive. In lieu of spectacle, however, Bishop and Fuller offer the eloquence of their performances and the comic profundity of their text.