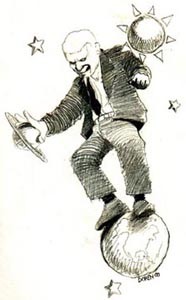 In a global era, why we hunger to be small

IN THE LAST DAYS OF 1999, Americans had many reasons to feel big. We were in outer space, repairing a telescope to peer into infinity. On Earth we were the world’s superpower. On Wall Street, money piled on money. And we were masters of a technology that promised the world: anything you might want, any time of the day.

But even while Americans were feeling very big, there were signs that an alternate mood was abroad in the land–call it a hunger for small.

The darkest side of that yearning has been most obvious among the white loners who are united in the forest against the complicated idea of America. More routinely, at American high schools, as we learned from Columbine High, the cafeteria is separated into camps, even while the student body grows spectacularly varied.

Is it possible that the more global, the larger our lives become, the more we will yearn for the small? Will there be more Quebecs, as there are more North America Free Trade Agreements? More chapters of the Crips and the Bloods, as that abstraction we call Southern California extends into the desert?

Parents purchase their son a computer for Christmas. They tell themselves they are giving their child the world; in real time, they are giving him solitude. The child ends up alone in his room, entering chat rooms where he meets people just like himself.

The loudest advertisers of bigness, of course, have been the cyber-rich. They are rich, out of all proportion to the rest of us. In the age of big, they are gigantic.

Last month, Jeff Bezos, founder of Amazon.com, Time magazine’s Man of the Year, was telling us he envisions a retail operation that can offer nearly anything we might ever want. The fawning media never asked Mr. Bezos about the loneliness computers make some people feel–and why it is that the primary business of e-retailing has been pornography.

No matter. In the age of bigness, hype replaces insight. Gossip replaces news. The people who matter are celebrities, people of no matter. And the wisest in the land are billionaires.

Indeed, a recent survey found that a majority of American teenagers expect to be millionaires in their lives. No economics teacher, apparently, has gotten around to teaching them about inflation: What happens to your million dollars when everyone else is a millionaire?

In San Francisco, studio apartments currently go at $2,500 a month in my neighborhood. The “utility vehicles” get larger and larger, look like tanks. But there’s no place to park.

I know a 20-year-old who has maybe $30 million. Trouble is, he can’t find an apartment. He wants Pacific Heights and a view of the Golden Gate Bridge. He has $2.1 million to spend on the place. There is nothing available at that price.

Suddenly, there are signs of a counter-mood, call it a New Bohemianism, in favor of small. A few weeks ago, you could see it, albeit masked, on the streets of Seattle, during the World Trade Organization meeting. Inside the hotels, business executives and government ministers talked global trade. Outside, self-styled “anarchists” took aim at Starbucks. Those masked strangers in Seattle were, in some cases, communards, but they were, I suspect, also children of the American suburb.

They are the ragged edge of a broader middle-class discontent with the large–with sprawl, and the loss of the intimate scale.

Tom Wolfe, the novelist, observes that, driving along a freeway, the way one knows one has left one town and entered another is by the repetition of store signs: Gap; Ross; Costco.

I SPEAK HERE not as a neutral. In 1999, the small bookstore in San Francisco in which I was a partner closed its doors. The usual reasons–the superstores and e-retailing. The odd thing, the interesting thing, was that at the party we gave for our customers, several hundred people came and not a few of them wept, wept openly, at the loss of a place downtown where their faces were recognized and their idiosyncratic tastes were remembered, by human beings.

Real estate developers are not oblivious to the hunger for intimate scale. Recently they have been building malls that resemble faux main streets. Politicians, meanwhile, are speaking of “open spaces,” trying to placate an impatience as the traffic slows to three miles an hour.

Who would have guessed that, at the end of a century given to bigness, a daughter of California, Butterfly, would perch in the upper branches of a redwood tree for two years to protect it from being cut down? When she finally relinquished her vigil she was weeping and she knelt to kiss the tree’s ancient roots.

In October, I was at an environmentalist meeting in Denver where the entire day was spent talking about the necessity for claiming vast parts of the West as “wilderness.” What struck me was that the participants were clearly the winners in today’s global economy: The women wore Chanel; the men wore handmade cowboy boots.

There is in the environmental movement, at its very heart, some desire to reverse our relationship with nature. There is a desire to protect nature, so that nature in another way might loom over us.

BESTSELLING BOOKS are written these days about great storms at sea. It’s as though, at a time when we have trained Moby Dick to jump for our amusement at Sea World, we yearn to fear the sea. We want to feel small, at sea.

The very rich are spending many thousands of dollars to climb Mt. Everest. Not-so-rich teenagers, devotees of “extreme sports,” take their boards and their ropes to the snow or to the water or cliff’s edge. They talk about the exhilaration of falling.

All during the New Year, I kept thinking of Jonathan Swift’s 18th-century satire Gulliver’s Travels. In one chapter, Gulliver wakes up to find himself a giant in the world. In another, he finds himself tiny.

Thus did 1999 come to an end with a strange mixture of mood. With all the talk of the stock market and technology, there was also the knowledge that a lone hacker could penetrate big business, big government, and our own home computer. With all the talk of globalism, there was also the knowledge that we live in a borderless world, defenseless against a lone terrorist.

In the end, big and small are ratios, each in relationship to the other. California, for example, has more gated communities than any other state, at the same time that California is melting into a global society with the highest rate of miscegenation of any state in the mainland United States. Small creates big and vice versa.

If we continue living in an America that’s publicly given only to the big, we may end up alone, while our children sit in their rooms at computers, in a country owned by three corporations, and threatened always by a hacker who may be our daughter.

This article originated with the Pacific News Service. PNS editor Richard Rodriguez, author of Hunger of Memory, writes on culture for Harper’s, the Los Angeles Times, and the News Hour with Jim Lehrer.