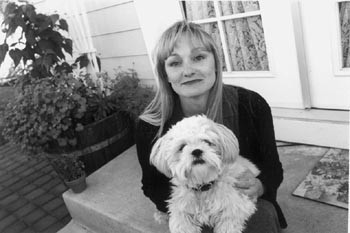 Labor of love: Susan Ohlson, pictured with her dog Caspian, helped transform a couple of acres of bare ground in Santa Rosa into a neighborhood for low-income families, with supervision by the Burbank Housing Development Corp.

Time but No Money

WHEN SUSAN OHLSON started building her house, she had no experience in carpentry and knew nothing about construction. But she didn’t let that stop her. “I had no clue how to do this,” Ohlson says. “But my attitude was, OK, well, I’m going to learn.”

In May of 1998, the Santa Rosa neighborhood of De Turk Commons was nothing but a couple of acres of bare soil and 32 low-income families, most of whom, like Ohlson, were new to the construction business. But they shared the dream of owning their own homes, and the willingness to help one another build them from the ground up. Under the supervision of the Burbank Housing Development Corp. in Santa Rosa, they began to make their dream a reality.

“The first couple of weeks, we didn’t have any idea what we were doing. There was a lot of shoveling of dirt,” Ohlson recalls. Soon, the family crews began laying the foundations, tying rebar, and driving stakes. Everyone learned to move quickly when the cement trucks arrived. Even on days when rain threatened to dampen enthusiasm, the work continued.

Ohlson discovered that she had a knack for framing the structure of the houses. As she placed two-by-fours and installed floor joists for the second story, the process of building her home became a labor of love.

“I was able early on in the project to submit changes,” Ohlson says. “I changed a hallway closet into a kitchen pantry. Instead of a sliding glass door off the kitchen, I put in French doors.”

It would have been nearly impossible for Ohlson, a secretary and single mother, to work the required minimum of 30 hours a week on her own. Fortunately, she had assistance from her 19-year-old son, Holland, and from what she calls her “church family,” fellow members of City Life Fellowship who volunteered their time on weekends.

At the end of last May, crews completed construction on the houses of De Turk Commons, and the residents finally moved in. A grateful Ohlson hosted a dinner of thanks for the 20 or so volunteers who had perspired on her behalf. After a year of hard work, she had what so many people struggle for: a house of her own.

“SWEAT EQUITY” is the somewhat undignified term for an arrangement whereby prospective homeowners can work off part of the cost of a house by helping to build it. John Lowry, executive director of Burbank Housing, prefers the term “mutual self-help housing,” although he acknowledges that it’s less catchy.

“We emphasize the mutual aspect of the program,” Lowry says. “It seems important to me that people have some investment in the house that makes them feel attached to it. If people are just handed a house, they may not behave like homeowners. This program provides an experience for them, an emotional equity. It also tends to weed out the people who are not willing to do the work.”

Since 1986, Burbank Housing has supervised the completion of 11 self-help projects throughout Sonoma County, with a total of 287 housing units. Three more projects in Santa Rosa, Windsor, and Cloverdale are slated to begin within the next two years. Quarry Ridge, a Healdsburg project, has halted construction until further notice because of a delay in funding.

Lower-income, first-time home buyers who qualify for the self-help program are required to put in at least 30 hours of construction labor per week per family, although many families choose to do more. A down payment is not required. Included in the package is a deferred payment second loan that does not need to be paid off unless the home is sold again. Most participating families have insufficient income to qualify for even a 5 percent loan in the conventional housing market.

In a red-hot housing market that is quickly moving out of the reach of low- and moderate-income families, these subsidies often can make all the difference for families with limited financial resources–if they are willing to commit to as much as a year of manual labor. Under the technical supervision of Burbank Housing employees, families work together pouring foundations, putting in siding, roofing, installing windowsills and baseboards, hanging doors and cabinets. Roxanne Trujillo, Ohlson’s friend and next-door neighbor at De Turk Commons, says she learned to use a powersaw while building her house.

“They don’t need to have construction skills, although, of course, we’re delighted when we find anyone who does,” Lowry says.

What participating families do need to have is a good credit rating and low debt obligations. In many cases, particularly in rural developments, that means Mexican-American immigrants–farmworkers who are much less likely to have bad credit than whites in the same income range. Mexican-Americans also are more likely to have two-parent families, making it easier for them to meet the labor requirements.

“Most [white families] we work with don’t seem to have trouble living near minorities,” Lowry says, “but quite a few of them are uncomfortable with becoming a minority–that is, being the only white family on their block.”

THE RELATIVELY RECENT history of self-help housing in America actually begins with minorities. In 1964, a group of Quakers in the San Joaquin Valley sat down with local Mexican-American farmworkers and asked them what it was that they wanted most. The workers’ most frequent response came as a surprise: not higher wages, not improved working conditions, but a place they could call their own. In response, the Quakers began searching for ways to make home ownership affordable to low-income families. The following year, they incorporated Self Help Enterprises, the first self-help housing organization in the country.

Today there are 10 groups in the state of California that offer sweat equity programs. Burbank Housing is the only such group in Sonoma County.

One reason that self-help housing is not more widespread is that it isn’t a moneymaking concept. Burbank Housing, a non-profit corporation, covers most of its costs through other projects, including conventional rental housing. The costs of development for self-help housing programs are so high in relation to values that the market remains far from lucrative.

“It’s the same dilemma that private builders face [when they’re] trying to do low-end first-time home buying,” Lowry says. “If you were very efficient, you could do nothing but sweat equity and cover your costs. But it would be tough.”

A more subtle obstacle is the cultural standard by which Americans judge their houses, particularly houses they own. Renting a house in a crowded urban neighborhood is one thing, but who wants to spend 30 years making mortgage payments on one?

Burbank Housing has what is probably the highest-density self-help program in the country. Although many prospective home buyers feel the need for privacy and plenty of space, that ideal is becoming more and more difficult to achieve. In the rapidly escalating local housing market, finding an affordable house–any house–is a challenge.

“A single family lot is a luxury in Sonoma County,” Lowry says.

TODAY, THE HOUSES of De Turk Commons are still noticeably newer than the ones across the street. The new paint gleams in the winter sunlight; in each front yard, a young tree is tied to a wooden stake. “The neighborhood is much quieter than I thought it would be,” says Ohlson, scooping up her shih tzu, Caspian, from the front lawn. “There are lots of small kids, but they’re very well behaved. The neighbors are just wonderful.”

Inside, the house is surprisingly spacious. At the top of the carpeted staircase are three bedrooms, including a guest room that Ohlson will convert into a sewing room next year. Warm sun streams through the south-facing windows.

Although the tree out front has just begun to sink its roots, Ohlson plans to watch it grow for a long time. The house is her son’s inheritance, something she hopes will remain in the family for generations. In a way, it’s also a gift to herself.

“I don’t know if I could just walk in and buy a house after having had this experience,” Ohlson says. “I know how this house was put together. I’ve always been a renter, and whenever I had a problem I had to call the landlord.

“I’ve got the education now, where I know how to do the stuff myself.”

To be placed on the Burbank Housing mailing list for upcoming sweat equity projects, call Mariella Zapata at 573-5902.