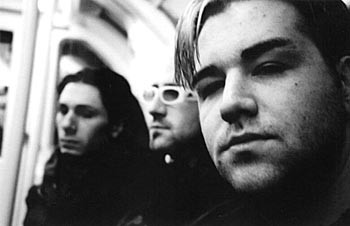 AFTER CLAMPING DOWN on their hometown scene with a tenacious grip, Spitkiss strike out from the heart of Silicon Valley with their aggressive, industrialized tech-metal to participate in Slam Fest 2000 on Jan. 27 at Rumors nightclub in Santa Rosa (see sidebar).

Highly creative, the band is a continually evolving artistic project and tends to make each live show a real event, bringing a performance-art quality to its high-energy rock concerts.

When the band released its sophomore CD Violence Is Golden (hereafter VIG), Bannister came out painted from head to toe in gold. At a benefit show last March Spitkiss chose a more subversive look for the night, sporting dignified dark suits. More recently, the band has taken on a sexy cowboy air, wearing ragged cowboy hats and incorporating a dusty Western twang into some of its material.

At one recent Bay Area show, Spitkiss took a futuristic approach with holographic clothing, a variety of metal and plastic hardware in their hair, and computer monitors onstage flashing cryptic messages like “Defragging Spitkiss,” “Fragmentation Increasing,” and “System Overload.”

With two full-length albums released on AntiMI Records (Not for Human Consumption and VIG), Spitkiss have distanced themselves from their initial “Goth band” stereotype and acquired a more eclectic and diverse following.

TORMENTED THEMES of pain, isolation, and anger carry throughout the band’s tumultuous lyrics and are emphasized in its heavy music. The single from VIG titled “Digits” has gotten the band a lot of attention and has appeared on several compilations, including San Francisco radio station LIVE 105’s first Local Lounge disc. With its angry guitars, fluid synths, gruff vocals, and demented lyrics–“You, passionless little mess/ I must confess that I caused your death/ Save the world, kill yourself/ Do it myself,” that later fall into the brutal chorus “Anger/ Violence/ Sex”–“Digits” is just one of many Spitkiss songs that worm their way into your consciousness.

Given the chance, the wounded “Deeper Scratch,” which finds Bannister mourning “I am I and you’re not me/ When I sink it’s far too deep/ Be the one, right now, today/ It’s a lie, you don’t care about me,” could be the next to get noticed.

During live performances, the band pulls no punches and unleashes a vigorous fury, with Bannister thrashing about the stage, writhing with aggression, hurling himself into the air with anger-fueled flips, and swinging upside down from almost anything available. Beating himself with his microphone, he leaves almost every show bloody, his wavy blue-black hair a tangled, sweaty mess. Winokur plays his guitar with a vicious, determined intensity, while Popkoff bounces off the keyboards with an energy barely afforded by his instrument. Bassist Shaw is known as the quiet one, taking a softer approach and generally keeping to the side of the stage.