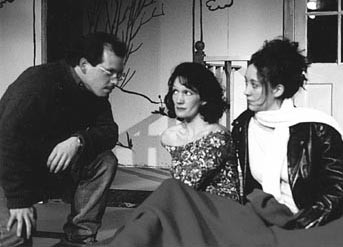 IF, AS AUTHOR Graham Greene suggests, “Thrillers are like life–more like life than you are. It’s what we’ve all made of the world,” then Sonoma County Repertory Theatre’s production of Rupert Holmes’ would-be thriller-comedy Accomplice, directed by Diane Bailey, should weigh heavily on everyone’s conscience.

Intended as a comic deconstruction of the ordinary two-act thriller, Accomplice is predicated on innumerable plot twists and ends up suffering painfully from its own cleverness.

Opening at the ubiquitous “country house,” the play introduces us to a sex-starved wife (Rebecca Allington) who plots with her secret lover (Jonathan Kesser) to dispose of her rigidly conventional husband (Eric Thompson). But lo! No sooner is the trajectory of this plot established than it’s chucked for a more scintillating counterplot involving a pair of double-crossing and lip-locking wives, which is soon upgraded to a pair of double-crossing and lip-locking husbands. But wait, there’s more . . .

Indeed, this play has more plots than a cemetery. But, alas, they’re all dead. In the spirit of a whodunit, one is compelled to ask: Who killed them? The first suspect, of course, is Holmes himself, who suffocates the play with a collection of storytelling devices in which style lords it mercilessly over substance. In cahoots with the playwright is Bailey, whose usually taut directorial reins seem to have slackened with this production. Her cast is let loose to trample the dialogue with missed beats and tired segues.

Despite the misdirection, the players occasionally brighten the circuitous plot with a few moments of genuine jollity, as when Allington comically undulates beneath a duvet with Kesser, whose initially villainous incarnation in the play is part Dudley Moore, part dud. That Allington, at one point, opens a bottle of poison with her mouth is a perfect symbol of the play’s tendency to flirt with disaster.

Kudos go to actress Kori Krehbiel, who endures a ridiculous and endlessly protracted bra gag for the duration of the second act’s first scene while portraying an unsteady ingenue. Later, she dispenses some fairly comic stage business with her character’s ear-piercing vocal exercises.

Eric Thompson’s turns as a gelded husband and anguished auteur also garner some chuckles, but ultimately his talents seem squandered.

The cast’s British accents are fickle at best–one could hear better English on a billiard ball. But then we fall into one of the strange trapdoors in Accomplice: in one of the play’s myriad realities, the players are portraying poor actors in an even poorer play. Unfortunately, it’s easy to distinguish the multiple realities of the play from the singular reality experienced by those sitting in the theater’s seats–one marked by tedium and tired buns.

To complement the production’s bad-play-within-a-bad play conceit, designers Michael Mingoia and Mac McCormick have devised an incredibly garish living-room set swabbed in a hue of jaundice-yellow seldom seen outside a hepatitis clinic.

In the end, the Accomplice does not succeed in roping the audience into service as a partner in crime. Instead, the play is merely a dress rehearsal for what otherwise looks to be a promising new season for SCR.