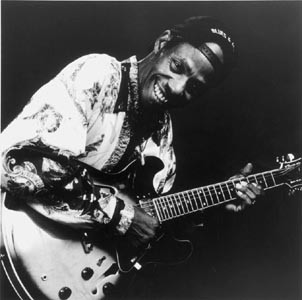 WALTER “WOLFMAN” Washington spent most of the ’90s with his music career in limbo in the United States. In the early ’90s, singer, songwriter, and guitarist Washington, 57, had stepped up to a major label, signing with Point Blank, a label owned by Virgin Records. But the bluesman’s lone CD for the label, Sada, came and went with little notice, and he was not retained by the label.

Instead, Washington found himself struggling through much of the decade to keep his career afloat while he tried to find a new record deal.

Blue Moon Rising, a CD Washington had recorded in the early ’90’s was finally picked up for release in 1995 by a small European record label. But the CD was never issued in America. It wasn’t until 1997, when Washington re-signed with Rounder Records–the label that had originally signed him in the mid-’80s–and released the CD, Funk Is in the House, that his stateside fans finally got a new batch of music.

Washington certainly didn’t intend to have such a long gap between studio records. But at least when he did get to release a CD in America he felt he returned in peak form.

“Just within the last two or three years, say, the music really started changing to the point where you can hear the tightness,” Washington says. Much of the reason for the musical cohesion is because of the development of Washington’s six-man backing group, the Roadmasters. Unlike many solo artists whose bands seem like easy-to-replace hired guns, Washington clearly views the Roadmasters as an integral part of his musical team. The involvement of the band members is obvious just by looking at the songwriting credits on Funk Is in the House.

“If they’re going to be playing the music, they’ve got to be [involved],” Washington says. “Some cats, they just tell the band you play that and you play this. But I give them a chance to express themselves. Of course, it kind of helps me, too, to understand who I’m working with and the type of people, the potential that they have. If the cats feel all they do is just play music and not be involved, you feel like left out, in a sense.”

Further evidence of the Roadmasters’ impact on Washington’s sound can be heard in the performances on the Funk Is in the House CD. Washington and the Roadmasters show off their blues and soul chops on a cover of Ray Charles’ “Mary Ann,” while on “Wolf Funk” Washington’s guitar playing adds a strong jazz accent to the funky foundation provided by the other musicians.

MEANWHILE, on bluesy soul ballads like the Washington-penned “When the Answer Is Clear” and Jerry Butler’s “I Stand Accused” the Roadmasters give Washington a sympathetic backdrop to showcase his rich vocals. Washington understands the importance of his band, in part because he spent a large part of his career as a sideman himself. And his mentor, singer Johnny Adams, wasn’t shy about sharing his knowledge with Washington and giving the guitarist a strong voice in the music Adams recorded. Washington had met the singer early in his career.

Adams, in fact, helped Washington, who had just quit the 12th grade, to get his first steady gig as a guitarist in the house band at the Dew Drop Inn in New Orleans. The house band backed a number of national acts that were booked to play at the club. One of those stars, Lee Dorsey (who was on a roll behind the hit singles “Ride Your Pony” and “Working in a Coal Mine”), gave Washington his first taste of life as a touring musician when in the early ’60s Dorsey hired the guitarist for his touring band.

For two and a half years, Washington backed Dorsey at theater and festival shows around the world.

After leaving Dorsey’s band, Washington did stints with R&B diva Irma Thomas and others. In the early 1970s, he also began working again with Adams, a partnership that lasted nearly 20 years. Washington served as a featured player on such critically acclaimed Adams albums as From the Heart (1984), Room with a View of the Blues (1987), and Walking on a Tightrope (1989). During this period, he also began fronting bands as a solo artist in his own right.

ON TOUR, Washington and his band would play an opening set and then back the acclaimed singer during Adams’ headlining sets. “Johnny helped me out a lot,” Washington recalls. “When I was out with Lee, all I did was play music. And so when I came back, Johnny asked me if I could sing. He heard me singing. He said, ‘Man, why don’t you come by the house sometime and I’ll show you how to utilize your voice?’–you know, like in ranges and hearing what you can do with your voice and how you can make different notes and sounds and hear yourself how you want to sing things.

“It took a while for me to find that, but after a while it just came natural.”

In the mid ’80s, Washington decided it was time for him to step up his career as a solo artist and bandleader in earnest. He continued to record with Adams, but having signed with Rounder Records (the label for which Adams recorded), Washington shifted his focus toward his own career. Three albums released on Rounder–Wolf Tracks (1986), Out of the Dark (1988), and Wolf at the Door (1991)–earned Washington praise for his unique blend of New Orleans funk, soul, and blues, and his talents as an expressive guitarist and singer established him as a promising force on the blues scene.

“This time I’m staying with Rounder,” Washington explains. “I’m not going to be venturing all over. It seems to be working pretty good for me.”