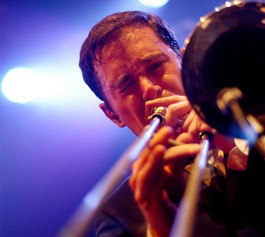 Life during wartime with the Slackers

The blank stares usually materialized in the middle of the sentence, before I could explain myself. “There’s this totally great ska album that just came out,” I’d say, and—boom! —the clanging metal gate of further interest in the matter fell over people’s faces like midnight storefronts on Market Street. Friends, co-workers, total strangers—no matter whom I tried to hype up for the Slackers’ amazing 2006 album, Peculiar, the reaction was the same: Who gives a fuck about ska anymore?

Believe me, it surprised no one more than myself—I hadn’t liked a ska album since 1993. But there was something about the record that seemed certifiably honest, a refreshing departure from the third-wave goofiness of bands like Reel Big Fish and Less Than Jake. Despite the music’s harking back to ancient Trojan rock-steady singles, the lyrics reveal a very modern world. Songs like “Propaganda,” “International War Criminals” and “Crazy” perfectly express through bouncy, lighthearted music the anger and frustration of living in America in 2006, during an illegal and immoral war, in a way that no hardcore band ever has, and a hopeful, solemn version of Bob Dylan’s “I Shall Be Released” closes out the album in perfect postscript.

The Slackers, led by the Bronx-alleyway drawl of vocalist Vic Ruggiero, released their seventh studio album last week called Self-Medication, and hopefully the title is not a reference to the escapist spiral down which keen awareness of political reality too often descends. On the album’s bleak black-and-white cover, a rail-thin girl looks to be passed out on heroin, and the title track chronicles getting by on a daily diet of whiskey and weed. The music, as well, inhabits druggy zones. Ruggiero’s vocals ride on a strange echo effect throughout the record, and the songs “Estranged” and “Stars” even break into Brazilian-hued psychedelia at times.

I have never seen the Slackers live, but the one girl I’ve found who shares my love of the band—she works at a downtown coffee shop—swears up and down that they’re the most amazing thing ever. She, like myself, has had to deal endlessly with friends recoiling from the word “ska” as if it were an obscenity, but she knows and I know that the Slackers are a golden needle in the haystack. See them or forever hold your peace on Saturday, May 10, at the Mystic Theatre, 23 Petaluma Blvd. N., Petaluma. 9pm. $15. 707.765.2121.