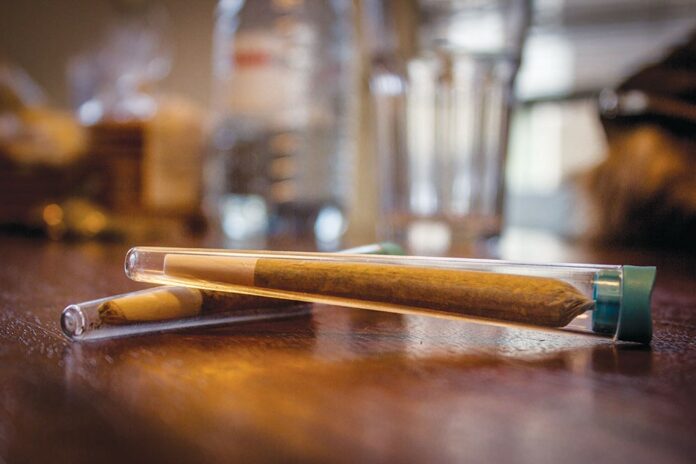 Not So Green Cannabis industry packaging waste is taking its toll on the environment.

Waste Not SPARC dispensary’s recycling bins have been filling up quickly since they implemented a recycling program.

When JJ Kaplan was a supervisor for the San Francisco–based cannabis collective SPARC, he saw a lot of trash headed for the garbage bin.

“I would see boxes of plastic and waste everywhere,” Kaplan recalls. He talked about it with his friend Sam Penny, a garbage truck driver who had also noticed the weed-waste problem, and together they decided to launch a new business, Canna Cycle, to reduce waste in the world of weed.

“People forget our industry was built on old-school hippies and growers who were sustainable on all aspects,” Kaplan says.

Based in Eureka, Canna Cycle launched at the beginning of the year and now has recycling bins in more than a dozen locations throughout the Bay Area.

How does it work? The bins are open to the public and easily identifiable via the Canna Cycle logo. Kaplan says the biggest waste product they see are the “doob tubes,” and glass jars. But they don’t—they can’t—accept everything, especially discarded cartridges from vape pens. That’s a recycling story for another day, or another legislative session.

Kaplan and Penny plan to repurpose much of the glass they collect back to the industry, and say that the plastic pre-roll tubes can be turned into things like filament for 3-D printers.

The company launched at a time when the recycling industry is in crisis due to rising costs and shrinking returns on investment, with some cities across the nation cutting their programs. Businessmen like Kaplan are jumping into the fray to slow the flow of consumer waste, while companies such as the Monterey-based Galicia put their attention to commercially-produced waste.

And, it comes at a time when Sacramento is starting to tune in to environmental consequences brought on by legalization—if slowly. The state senate recently passed SB 424, which was targeted mainly at banning single-use e-cigarettes, but also includes single-use cannabis vape pens in its scope.

The advent of Proposition 64 (which legalized recreational cannabis sales) she says, came with so many built-in ground rules and regulations that there “aren’t too many legislative aspects to change the waste aspect right now.”

Enter Kaplan and his new program to collect those “doob tubes” containing single joints. As for the vape pens, they’ve presented a disposal challenge for Sonoma County, given their legal status in light of the ongoing federal ban on cannabis, say county officials. It’s not just about cannabis, but that facet of American consumerism which equates individual liberty with the pursuit of personalized products.

SPARC, which has production and growing facilities near Kenwood as well as dispensaries, has pledged to be an industry leader in finding solutions to the pot-waste phenomenon. Indeed, says company vice president Robbie Rainin, the bins at SPARC dispensaries in Santa Rosa and Sebastopol are overflowing with recyclables returned by customers. He credits Kaplan for wading into what he describes as a “huge problem of excessive packaging” brought on by legalization.

So why all this waste? Safety regulations are forcing cannabis businesses to create packaging that’s designed to dissuade children from using cannabis products. There’s currently no effort underway in the state to figure out how much waste the cannabis industry is generating both at the consumer and production level.

But it’s a lot, if those bins are any indication: Craig Pursell, SPARC’s assistant dispensary manager, says that in the few short months since the bins have arrived, customers have not only embraced the initiative, but that the “bins are filling up at an exponential rate.” They can hardly keep up, he says. “We need more people and more bins—or bigger bins.”

“Anything that’s single-use disposable is a concern,” says Leslie Luckacs, Zero Waste Sonoma’s executive director, “and I’d like to work with the cannabis industry so they can reduce impacts on their single use products on the environment.”

The flower, or bud, is what most people think of when they think about ingesting cannabis, and those 3.5 grams of dried product, when purchased at a local dispensary, come in plastic or glass jars that can weigh up to 184 grams. A 1-gram joint comes in a plastic tube containing 40.5 grams.

Edibles come in packaging that weighs up to 22 times the weight of the product.

The sticking point in sustainable cannabis is vaping. The devices come with heavily toxic lithium batteries and vape cartridges made out of metal and glass, plus combustible heating filaments. While each of these things are theoretically recyclable on their own, when combined they are not. There’s also some leftover THC residue inside the cartridge, making it a hazardous material by law, and leaving individual e-cigarettes in a sort of after-life limbo. At present, the disposal of e-cigs and cannabis vape pens is left to the consumer, and by extension, the locality that picks up the trash.

When it comes to e-cigs, she says that if the spent cartridge contains nicotine, it should be taken to the home hazardous waste program for disposal as a toxic material.

It’s trickier for THC vape pens. “Unfortunately,” she says, “we don’t currently have a clear answer for cartridges that contain a minimal amount of cannabis, as the [hazardous waste programs] are not allowed to accept controlled substance at this time. In general, cannabis waste needs to be rendered unusable and unrecognizable prior to disposal.”

The issue has come to the fore post Prop 64. During the medicinal era of California cannabis, the industry was not as heavily regulated, allowing dispensaries leeway in efforts like reusing old jars. They could also collect, clean and reuse vape pens.

Now the cannabis recyclers are split between commercial and consumer-focused. Down in Monterey, the cannabis waste-management company Galicia has stepped in to the commercial-cannabis trash business. They’ve been consulting with her organization’s national council, says Brasch, “to be a guiding beacon” to help the company navigate complex cannabis regulations.

Whereas Canna Cycle serves dispensaries, Galicia takes care of waste on the producers’ end, servicing hundreds of growers and product cultivators throughout the state. Company co-founder Garrett Rodewald says the company is also spearheading a recycling campaign for vaping.

For the time being, Kaplan’s bins are clearly marked to let people know that they don’t accept vape cartridges. “That’s been a tough one,” he says. “We’ve been instructed by the state to stay away from it. That’s the one gray area in all of the packaging issues.”

For commercial outfits, it’s pricey for pot businesses to dispose of their own organic waste, says Scott, “and must be rendered unusable and unrecognizable prior to disposal.”

Businesses have the option to compost on-site “or self-haul cannabis to our transfer station,” which incurs a minimum $400 charge for it being considered special waste. “The material will be destroyed immediately and sent to landfill,” she explains. “The business will then be given a receipt as proof of destruction.”

For its part, Canna Cycle has teamed up with Humboldt County growers to launch a separate company, Sugar Hill, last month. Its first item, the Sugar Stick blunt, comes rolled in hemp wraps with a wooden, biodegradable tip to reduce heat on the user’s lips, and comes in a fully biodegradable, hemp-plastic tube.

“The cost of using biodegradable plastic can be two to three times more expensive,” says Kaplan. “But if these become popular, hopefully other brands will follow suit.”

Kaplan highlights what some may view as an absurdity when it comes to the well-intentioned child-proofing that comes with cannabis. A parent himself, he appreciates the rationale behind childproof pot products, but observes that “if you have cannabis, it shouldn’t be anywhere near your child in the first place. I, as a parent, shouldn’t have to worry about you and your kid.”

He further envisions a future California legalization regime where consumers would have a choice between “doob tubes” and so-called “loosies.”

“The biggest change we could make is to give people the option,” he says. “Do you want it in a ‘doob tube,’ or do you just want it in your hand. If I could go buy three pre-rolls like that, if I know that I’m saving the earth? That would be beautiful.”