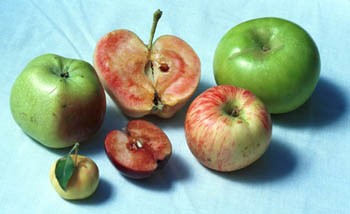 To Market, to Market

Does political controversy belong at the farmers’ market?

“WE TRIED for years to keep people like that out, but the city of Petaluma says that it’s a public place so we cannot tell them that they cannot be there,” says Erica Burnsgaler, who manages the Petaluma Farmers’ Market. No, “people like that” don’t have a contagious disease. They represent political and issue-oriented groups, and Burnsgaler would like to exclude them from the farmers’ market.

Burnsgaler isn’t alone. If you come to the Tuesday evening Sonoma Farmers’ Market, you may notice a red and gold sign propped up on the strip of grass in the center of the Plaza. The sign reads, “The farmers’ market takes no position on the issues presented in this area.” Market manager Hilda Swartz places it at the end of a row of tables set up by apolitical nonprofit groups, to mark the end of the area that has the Sonoma Farmers’ Market’s seal of approval.

Not everyone is charmed by that demarcation. “I don’t think that segregating certain groups at the farmers’ market is a good idea,” says Sonoma Mayor Ken Brown. “As long as everyone obeys the normal societal rules of interaction, I prefer to see people treated equally and blended together in typical melting-pot fashion. That’s how I view democracy.”

But the distaste of some markets for groups with a political tinge didn’t spring up out of nowhere. Swartz says, “We get complaints from customers who think we’re taking a particular side, that we’re either Green or Republican.”

Downtown San Rafael Farmers’ Market Festival manager Bridget Moran says that she has received complaints of a different sort. “Most of the people who have something to sell, whether it’s a product or an idea, are respectful. But some are in your face, pushy, and that can drive customers away,” she says.

FOR THE PAST four weeks, Sonoma No Spray–which opposes the use of pesticides to control the glassy-winged sharpshooter, a vineyard pest–has been the only group on the unapproved side of the “takes no position” sign, which Swartz optimistically places at the outer edge of the Plaza to force No Sprayers to the sidewalk. The No Sprayers keep moving the sign, and their table, back toward the music, the fun, and the people who may want to hear their message.

All the back and forth may seem a bit odd to onlookers, but as Zen master Koben Chino once said, “We are all just kids.”

Like it or not, people in the U.S. of A. have the right to share their views in public places, including farmers’ markets and privately owned shopping malls. Knowing this, market managers reserve special areas for political and issue-oriented groups, and don’t charge them to be there. At the San Rafael and Santa Rosa farmers’ markets, political groups that can afford to pay can use the area reserved for vendors and nonprofit corporations. In Santa Rosa, the reverse is also true: nonprofit corporations that can’t afford to pay can use the Free Expression Area.

Burnsgaler allows the unwanted groups in Petaluma to set up tables in a specified area if they put up a sign saying that the farmers’ market does not endorse their views. “They’re also free to walk around and pass out literature,” she says.

But Paula Downing, who manages the Sebastopol Farmers’ Market, actually welcomes thought-provoking discussion at the market. She says, “I think the world is really in bad shape, and the farmers’ market is a way to educate people on what you can do to stop the way the world is going. The farmers’ market is one way; local shopping is another. They go together. Anybody who has ever asked me locally if they can be at the market, I always say yes. I’ve never had any problem with people saying, ‘Oh, God, why do you let these people in here?’ ”

Santa Rosa Farmers’ Market manager Tracy Pugh says, “The market is a community event, and we’re allowing the community to speak. That doesn’t mean we’re supporting one group over another. We’re just trying to represent what’s in the community.”

With the exception of B Street, which is reserved for farmers and their customers, people can also walk up and down the streets passing out flyers, though Pugh discourages it. “Most of the flyers wind up on the ground and create work for market staff,” she says. As for complaints, “There are always people who come up and ask, ‘Why do you have Krispy Kreme Donuts here?’ ”

Tara Treasurefield writes about environmental, public health, and free-speech issues. She sometimes sits at the No Spray table at the Sonoma Farmers’ Market.