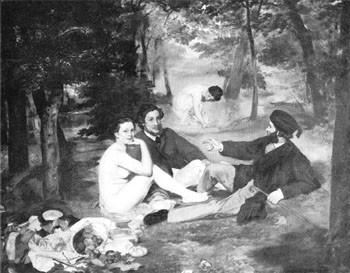 THE WORD ‘PICNIC’ is loaded with possibilities: a barbecue in the woods, with a red-checkered tablecloth, and pine needles falling into the potato salad. Or a romantic rendezvous under a shady oak in the middle of a flowery meadow. Or a jaunt to a sunny beach, a wicker basket banging against soon-to-be sunburned legs. Wherever you go, though, a picnic’s supposed to be a lark, a whim, a spur-of-the moment fete, right?

Wrong. Oh, sure, flowers, beach, breeze, all of that good stuff. But a successful picnic is rarely spur of the moment. “You really have to plan a picnic,” says cookbook author Barbara Scott-Goodman. “People think it’s all serendipitous, but it’s not.”

If anything, a picnic requires even more planning than many formal dining occasions, because there are more variables to consider: the weather, the company, the evenness of the table or table substitute. Once you get the people and plates in the car and head out, you can’t just pop back into the kitchen if you forgot something (you’ll have to buy it at twice the price at that suspiciously charming country store five miles back).

However, there are many reasons why picnics continue to be a popular pastime. For starters, people tend to relax outdoors, and the savvy host will rely on that. “If I’m having some people whom I don’t know that well, I’ll give them lunch on the deck,” says Scott-Goodman, who has written the Picnics and the Garden Entertaining Cookbook. “It’s more comfortable. We can talk about the weather, the garden, and keep everything easy.”

THE INSTANT intimacy of picnics makes things easier on the host as well. “People like to pitch in more outdoors, I’ve noticed,” Scott-Goodman says with a chuckle. “Guests are much more willing to pick up and clear and pour drinks and serve kids. They’re feeling much more at home.”

Ironically, picnics are the one occasion when the host needs less help than usual, because all the food has been prepared ahead of time. “A picnic is a fabulous way to entertain because you’ve done everything already,” says Dee Dee Stovel, author of the newly released Picnic. “You pack it up and take it to a wonderful place, and all the work is done.”

How much work you put into your picnic depends on the menu. When the weather is hot, it makes sense to keep the menu minimal. Cold soups, some of the most appropriate dishes for summer picnics, can be whipped up in a blender in a couple of minutes. “They’re really lovely for picnics,” says Stovel. “Cold soups are somewhere between an actual soup and a nice cold drink.” Scott-Goodman concurs on the cold-soup question–in her books she offers such recipes as gazpacho and chilled clam chowder. She also advocates finger foods. “Of course you’re not going to bring spaghetti on a picnic,” she says. “You want fried chicken, biscuits and cheese, things that are portable.”

For dessert, both authors stick with the finger-food theme. Stovel’s favorite end-of-picnic food is a brownie with a thin middle layer of raspberry jam, which she cuts up into 1-inch cubes. Scott-Goodman, too, makes brownies and cookies. No pie, she says, and definitely no ice cream unless an ice-cream truck happens to drive by. “Think about how easy this could be, instead of how much you have to bring.”

THE OVERBURDENED picnic of the past can be even further modernized with just a few twists on old favorites. Stovel suggests a low-fat makeover of the traditional potato salad, in the form of a yogurt/mayonnaise dressing, while Scott-Goodman is fond of a potato salad lightly tossed in vinaigrette: “I love mayonnaise in potato salad, but you have to think in terms of food safety.”

The meat-on-bread concept at the heart of the American picnic can be adapted to anything, from chicken fillets in an Asian-inspired marinade to Middle Eastern lamb sandwiches. And even if you must avoid shocking more traditionally minded guests at all costs, you can still add spice to the table simply by whipping up a few new condiments. For hamburgers Scott-Goodman has created a caramelized red-onion sauce, made creamy with yogurt or sour cream, and for sausages, a mustard-dill sauce. “They’re still hamburgers and sausages, but it’s a little more upscale.”

Fortunately, the traditional picnic settings–those floppy, single-ply paper plates–have fallen away, to be replaced by much sturdier descendents that can take a lot more abuse. Miss Manners might object to such inelegant solutions: in her sections on picnics and fast food, somewhere after the eating instructions for corn on the cob, she emphatically says to always use real dishes. Stovel and Scott-Goodman, on the other had, say there’s really no need, unless you’re eating at an outdoor symphony and trying to make your hapless lawn neighbors envy your casual elegance.

No matter what you take to eat, or what you’re eating off of, if you’re picnic-prone you may want to pack a trunk in advance. “I like to have a basket packed and ready to go in the summer, except for food,” says Stovel, who also recommends making a checklist of the items that you use most, whether that’s a pair of silver candlesticks or a bee-sting kit. This sort of advance organization makes so-called spur-of-the-moment outings much more practical.

All you need to do is drop by a deli for seltzer and sandwiches, and you’ll feel summery and spontaneous without sacrificing good sense.