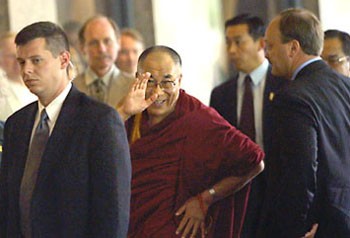 THE FAIRMONT Hotel is crawling with security agents. Outside, where a small troupe of media types has assembled to await the imminent arrival of a certain police-escorted limousine, the imposing presence of law enforcement–San Jose’s finest, on foot, horseback, and motorcycle–is decidedly visible. Inside and upstairs (if you have clearance to get upstairs), the atmosphere is somewhat less militant. In the lobby of the hotel’s Imperial Ballroom–the location, in just a few short hours, of today’s unprecedented event–the tone is anxious, but celebratory; everywhere you look, hands are being shaken, hugs exchanged, tears wiped away. It resembles nothing more than the pre-commencement jitter-buzz at a college graduation.

These are the Unsung Heroes of Compassion, at least, those whose names begin with letter N through Z. A-through-M are already in the ballroom. Similarly excited–nervous, anxious, delighted, awed–they are taking their turn rehearsing a ceremony that will take place this afternoon, when the Unsung Heroes of Compassion A-through-Z–a total of 51 individuals from around the world, hand-picked by the Marin-based Wisdom in Action–are formally honored for their extraordinary devotion to humanitarian causes. This is reason enough for excitement. But the real cause of the honorees’ remarkably heightened level of anticipation–and the explanation for all the security–is that each honoree will be personally thanked by none other than His Holiness, the Dalai Lama of Tibet.

The event, the brainchild of Wisdom in Action’s director Dick Grace, represents the first time that the Dalai Lama–exiled leader of Tibet, spiritual symbol, and embodiment of compassion in the eyes of millions of Buddhists around the world–has participated in an event like this, an unofficial canonization of activists, volunteers, human rights supporters, and other disseminators of kindness.

THE HONOREES run the gamut. They come from across the country and around the planet–and include several from the North Bay: Gloria Preciado of Napa, who for 20 years has given shelter to immigrating families from Mexico; John Arthur Earl Jr. of Marin City, a former homeless man and amputee who’s become a full-time volunteer counselor at Hillview Care Center; and Olga Murray, a one-time lawyer whose Sausalito-based organization, Nepalese Youth Opportunity Foundation, aids and educates homeless Nepalese youngsters.

Says Murray, appearing both overjoyed and overwhelmed, “Doing the work I do now, helping others–helping, for instance, to free over 800 girls from bonded service in Nepal–I get more satisfaction in a week of that than I did in 37 years as a lawyer. My 15 minutes of fame today is very nice, but only because it may inspire others to follow their own hearts.”

During the 90-minute press session, at which local media are invited to meet the honorees inside a sunny conference room–where many of the recipients seem more eager to chat with one another than to subject themselves to the embarrassing queries of reporters–one person after another expresses discomfort at having his or her efforts shoved into the spotlight.

“I don’t want this attention,” Earl murmurs, smiling shyly from his wheelchair, warmly squeezing the hands of his fellow honorees as they stop by to swap congratulations. His eyes frequently fill with tears, though not in response to any discomfort the attention is bringing him. With a laugh, he says, “I got the call months ago that I’d be honored by the Dalai Lama, but it didn’t register until two days ago, and I’ve been crying ever since. I can’t hold back the emotion.”

“I’m frankly having trouble coming to terms with how I even deserve to be here,” is how Lloyd Marbet, of Boring, Ore., puts it. Marbet is being honored for his 32 years of trying to stop the dumping of nuclear waste and to protect the rivers of Oregon. Deserving or not, Marbet admits that the event is one he wouldn’t have missed.

“It’s not often I get to be in a room filled with so much kindness,” he says.

Apparently the Dalai Lama feels the same way. “Brothers and sisters, I am happy to meet you. I very much appreciate what you do,” he begins, taking the stage shortly after noon to address the honorees, who’ve taken their places, in alphabetical order, just the way they rehearsed. “Today’s gathering is a very unique one,” he acknowledges. “I always express the practicing of compassion. I, myself, a tiny follower of Buddha, practice compassion. But when I see these people, my talk of compassion is just lip service.

THE CEREMONY that follows is elegantly simple. One by one–as actress Sharon Stone, the MC, reads each name and describes that person’s work–the honorees cross the stage, stopping to receive blessings and a silken khata (a ceremonial scarf) from His Holiness, who literally beams with glee at his part in these proceedings. John Earl, his silent tears now unstoppable, is the first to be greeted by His Holiness, who steps from the stage to bow before the wheelchair before placing the khata around Earl’s neck. By the time Stone reads the 51st name–Jigme Yutay, whose organization, Bay Area Friends of Tibet, has helped hundreds of exiled Tibetans find new homes in the Bay Area–there are few dry eyes left anywhere in the room.

The Dalai Lama concludes with an exhortation to the now loudly sung Heroes of Compassion. “To you I say only, please continue,” he tells them, as the sentiment is welcomed with a round of applause.

“Humanity,” he adds, “needs your compassion.”