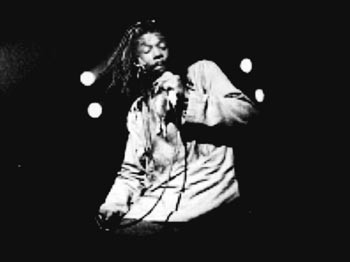 The legacy of Peter Tosh

ONCE THEY WERE a trinity. Robert Nesta Marley became Bob, and he was king and was consumed. Neville Livingston named himself Bunny, and he keeps the spirit alive. And then there was Peter Tosh, who called himself “the toughest,” and he was murdered.

Ten years ago Tosh, the true soul rebel of the Wailers, the quintessential reggae band, died tragically in his home when three intruders emptied their guns into him. Although one gunman, a man whom Tosh had known and aided, was convicted in one of the shortest trials in Jamaica’s history, the other two disappeared without a trace. Many believe that Tosh was assassinated by pawns of those in power because of his unrelenting criticism of the “shitstem” and his extremely visible and audible campaign to legalize marijuana. After all, the police had nearly ended his life before, beating him mercilessly to within an inch of his life years earlier.

The life and music of Tosh are celebrated in a striking new CD boxed-set, Honorary Citizen, from the Legacy wing of Columbia Records. Composed of three discs representing three dimensions of Tosh’s musical legacy, Honorary Citizen begins with rare Jamaican singles, mostly from the late ’60s and early ’70s, among them the classic Wailers’ cuts “Pound Get a Blow” and “Fire Fire,” which reflect the group’s increasing social activism.

On those solo excursions where Tosh’s rich baritone shines outside of Bob Marley’s shadow, his militancy is clearly expressed. The Lee Perry-produced duet with U. Roy stakes out Tosh’s Rastafarian convictions, putting Roy, the deejay originator, on vinyl for the first time.

“Here Comes the Judge” casts Tosh as the arbiter deciding the fate of a group of colonial defendants, including Christopher Columbus and Vasco da Gama, and with severity he sentences them to hang by their tongues for, among other things, killing 50 million black people. The collection of early Tosh singles is Honorary Citizen‘s first strength.

The second CD collects Peter Tosh live from recordings made during his 1982 tour through North America. Tosh was at the peak of his abilities then, and his performances resonate with awesome power and conviction. Tosh often embellished his music with sermons or “livatribes” that challenged the audience spiritually or politically, and a couple of them are preserved here. In Southern California he introduced “Glass House” by saying, “When you and you and you see I and I here, don’t think I come here for an entertainment. I and I come to flash lightnin’, earthquake, and thunder in these places of destruction and unrighteousness.”

The final disc is a greatest-hits compilation from Tosh’s solo albums, and the music is very familiar. Having “Downpressor Man,” “Stepping Razor,” “Equal Rights,” “Bush Doctor,” and “No Nuclear War” on one CD is a good alternative to searching for them on assorted records, but it is disappointing that alternate or extended versions of the great songs were not included. Surely they must exist. This third disc also ends with a lame tribute song written and sung by Pauline Morris, Tosh’s cousin and the CD’s producer.

The set also boasts a 60-page booklet that includes detailed notes, giving the context for every song, including recording details and striking photographs. Reggae archivist Roger Steffens, one of the pre-eminent experts on Bob Marley and the Wailers, also provides a short biography and a list of Tosh’s many recordings.

Honorary Citizen is as much a monument as it is a collection of music, and that is exactly how it should be. The essence of Peter Tosh was his revolutionary message. Music was his weapon, and this tribute displays much of his ammunition, but he also delivered through his language, his image, and his living. This collection preserves Tosh’s essence remarkably well.